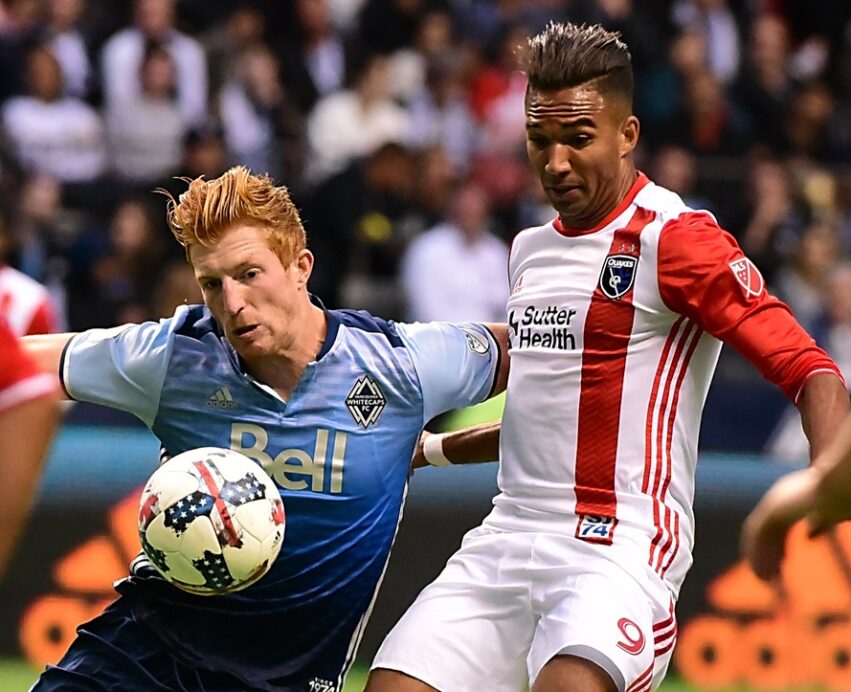 Only less than two weeks removed from their thrilling 1-1 draw, the Vancouver Whitecaps and the San Jose Earthquakes will battle again at BC Place. But this time, dreams of lifting MLS Cup will be on the line.

All pressure is on the home side as the Whitecaps hit a late mental road block following a confounding season. Carl Robinson’s side failed to seal the Western Conference’s first seed in their final three games, – one which came against the Quakes – and, now they’re matched up against a side that knows them too well. But despite the familiarity its never beneficial to get comfortable when the likes of Yordy Reyna and Fredy Montero are against you.

The Quakes are coming into Wednesday’s game on an historic high, and with the lowest expectations of any playoff team, which could result in a winning concoction. Chris Leitch and co. earned passage to the club’s first playoff appearance in five years through a stoppage time goal by Marco Ureña on Decision Day. Urena’s game-winner at Avaya Stadium encapsulated the Bay Area side’s rollercoaster of a season, and its loose grip on a playoff appearance throughout the season.

Here is a closer look at Wednesday’s Knockout Round matchup in Vancouver:

The Quakes got the first laugh on Vancouver back on March 11 as they edged Robinson’s side 3-2 following a red card. On October 15, during the playoff push, both sides played to an entertaining 1-1 draw.

WHITECAPS: Montero’s first year back in MLS following his departure from Seattle in 2012 has treated the Colombian well as he recorded 13 goals and six assists. The forward has proven to be the difference for the Whitecaps plenty of times during the regular season, and when he is stopped in his tracks, Peruvian teammate Yordy Reyna does well to clean up the act.

QUAKES:Chris Wondolowski has quitely turned into more than the league’s deadliest poacher. The Quakes captain not only leads his side in goals (13) but in assists (8), and with target man Danny Hoesen alongside him, Wondolowski will continue to find moments and space to shine.

Fredy Montero and Yordy Reyna vs. Victor Bernardez and Florian Jungwirth. The Whitecaps’ forward tandem along with Robinson’s counterattacking tactics exposed the Quakes centerbacks mobility and off-the-ball nous. Time and time again the South American duo found Bernardez flat-footed or far too up the field leading to several looks at goal. But if the Quakes centerback partnership can be as composed as Sunday’s match against Minnesota United, trouble could be up in the air for the Whitecaps attack.

WHITECAPS: It’s tough not to laud Montero for his dangerous attacking abilities that have been key for the Caps resurgence this season. However, another newcomer to BC Place has contributed immensely. Jacob Nerwinski, the seventh overall selection in January, has been one of the club’s most consistent players in the latter stages of the season; responding well to Robinson’s call for a high work rate from his fullbacks.

EARTHQUAKES: Darwin Ceren has been the Quakes unsung hero during the club’s tough playoff-seeking stretch that started in August. Despite missing two games for card accumulation, the El Salvador national team captain has been the cog in the Quakes midfield; allowing for the Quakes dynamic front four to create chances at goals from all angles.

Of course, on paper -21 goal differential or a last-minute goal to clinch a playoff spot can make a side be perceived as inferior heading into the Whitecaps’ fortress, but, at this point, the Quakes have nothing to lose with the immense confidence in their locker room.

On the other side of the coin, the Whitecaps, despite maintaining the West’s top seed for several weeks and being clear-cut favorites, are not in the best form after only accumulating four points out of their last five matches.

The Quakes are playing inspired soccer and the narrative on them folding after conceding a goal has all but evaporated. A win for the Quakes validates general manager Jesse Fioranelli’s “gut feeling” of axing historic manager Dom Kinnear and siding for the appointning of rookie manager Chris Leitch in the middle of the summer.

But, first, a game of inches will be played. Both brains at the helm are well aware of each others tactical styles. The environment will be too similar to that of less than two weeks ago, and if the Whitecaps gain control this time around, chances are they will play more cautiously. But they are playing the Quakes, and you can never rule out something happening in Goonie time.