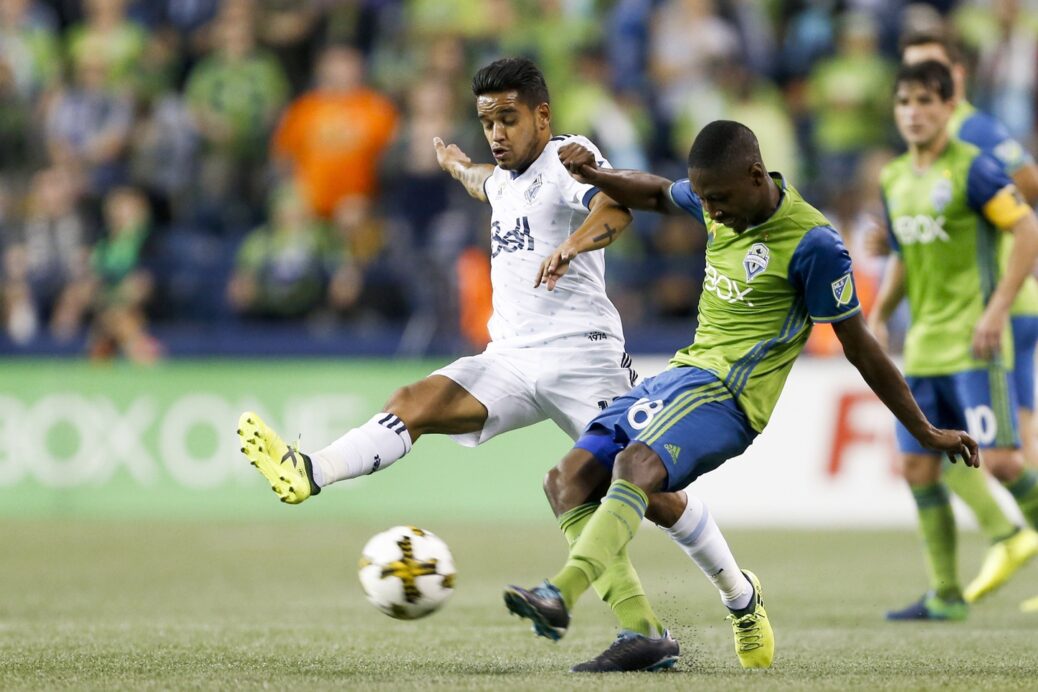 The big spenders of the Pacific Northwest open their MLS Cup defense on Sunday against the team that sometimes gets lost in the shuffle amidst the success of its neighbors to the south.

The Vancouver Whitecaps come into the Western Conference semifinal clash with the Seattle Sounders as decided underdogs and on the heels of a five-goal victory over the San Jose Earthquakes at BC Place.

On the other side of the Cascadian coin, the team who invented winning MLS Cup in the same year as a near-catastrophic disaster will have to rely on some wily veterans in British Columbia.

Three different results came from Sounders-Whitecaps clashes in the regular season. Carl Robinson’s men won at BC Place on April 14, the two teams tied in Vancouver on August 23 and the Sounders won the most recent meeting at CenturyLink Field on September 27.

For the narrative lovers out there, Fredy Montero is set to play a major role in the West semi against his former club. In three matches against the Sounders in 2017, Montero has found the back of the net on three occasions, including twice in the 2-1 win on April 14. The 30-year-old forward netted his first tally since September 23 in the thumping of the Quakes on Wednesday.

Fans of MLS will miss Joevin Jones when he leaves for Germany after this season. The Trinidad and Tobago international is a matchup nightmare for opponents, and he can line up at wing or at fullback. With the Whitecaps looking to take a lead in the series at home, Jones will be vital on the counter and in defense for the Sounders.

There’s a bevy of matchups worth drooling over in this series, but the key lies in the middle of the park. Tony Tchani has quietly settled into his role in the Whitecaps squad since the trade that sent Kekuta Manneh to Columbus. Tchani will be tasked with stopping any advances the Sounders want to make through the center of the field, as will Cristian Roldan on the other side of the field.

Roldan has improved immensely under the tutelage of Osvaldo Alonso and he’ll have his hands full with the speedy attackers that occupy the offensive slots in the Vancouver starting XI. Whichever young midfielder limits the opposing attack the most will come out on top, and there’s also a decent chance they both take over and the game ends scoreless.

Jakob Nerwinski won’t be in the mix for Rookie of the Year, but he’s had that type of impact since entering the Whitecaps lineup on a permanent basis on June 17. The rookie out of UConn has been a steady force on the wing of a defensive unit that doesn’t get as much love as it should.

With Clint Dempsey suspended and Jordan Morris injured, Will Bruin will be in charge of the Sounders forward line on Sunday. The 28-year-old scored in double digits for the fourth time in his career in 2017, and he’s got six postseason goals from his time with the Houston Dynamo.

Sunday’s game will be closer than you think. There’s a small chance one side will run away with a massive advantage heading into Thursday’s second leg in Seattle. Vancouver has a strong back four led by Kendall Waston that will make it difficult for Bruin, Nicolas Lodeiro and Co. to operate at times.

Waston will also be an asset on set pieces, as well as the clever free kick takers scattered across the Whitecaps lineup. Luckily for the Sounders, they have a player in Roldan that can be in the right position and not give up a ton of clumsy fouls.

The battle in the middle of the field will be key, and it could come down to one significant chance deciding the game. If it comes down to that, the Sounders have the advantage defensively with Stefan Frei in goal.