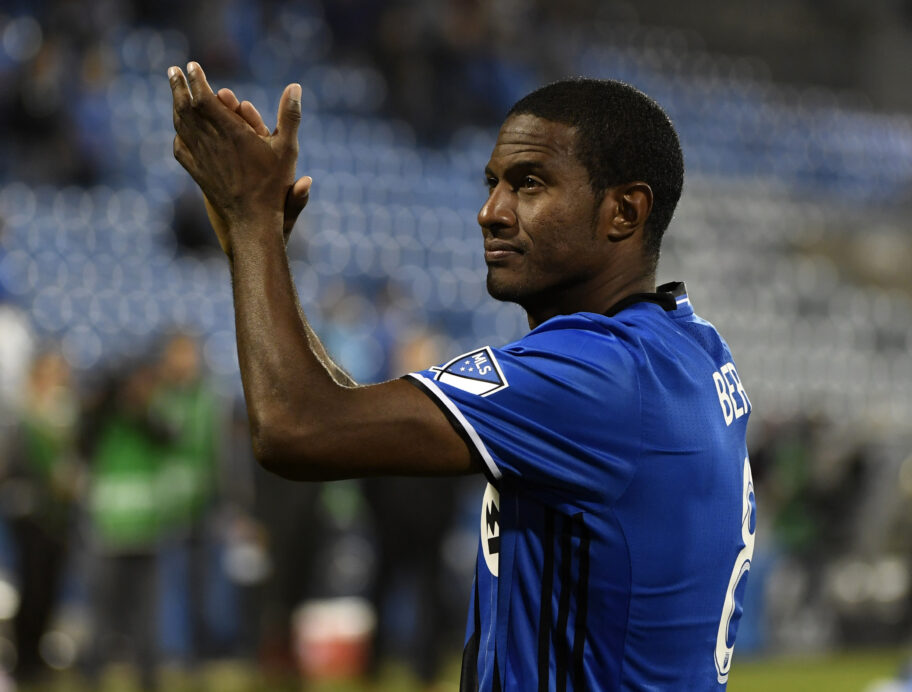 In any other situation, Sunday’s 3-2 loss to the New England Revolution would have been the bitter en of an underwhelming season for Montreal Impact fans. Instead, it was a time for celebration.

It was their captain Patrice Bernier’s going away party, a final game before the man from the Montreal suburbs would call it a career. For Bernier, it started with his last ever pre-game speech.

“Usually you have the energy to inspire but everything inhabits you and you realize that it’s the last time you talk to the group,” said Bernier. “It was probably the worst speech that I had this year, at the end it was the emotions that took control.

“I don’t know if they will make a video [with it] but it will not be the speech that I’ll be the proudest of.”

It may not have been his best speech but his teammates got how heartfelt this moment was for him.

“It didn’t take long. He said two-three words and he started to cry, which is normal,” said fellow midfielder Samuel Piette. “Just to see that he was ready for the game and that he was touched, it showed that it was his last game. There wasn’t much to say, everything was on the table.”

On his final game in the bleu-blanc-noir uniform and above all else he left his fans with the best of gifts: a goal.

In stoppage time of the first half, the Impact were given a penalty and it was Bernier who stepped to the spot. With his parents behind the goal ready to ring the ceremonial goal bell, Bernier ran towards the ball, made his trademark stutter and placed the ball in the lower right-hand corner.

Not his prettiest goal, since the shot was almost saved by Brad Knighton who chose the right side but came in late thanks to Bernier stutter, but the 20,681 fans in attendance couldn’t care less.

“I’m usually really calm but this time it’s been a bit of time since [the last penalty scored],” said Bernier. “There were a lot of things to think about, I usually don’t think a lot. After that, it went well. I scored, I’m happy.”

At the 81st minute, Bernier saw his number on the fourth official’s board. For the last time, he would leave the pitch as a player and never come back. Upon seeing the red number eight, the floodgates opened.

“During the week, he said he didn’t know how he would react and I said: ‘Pat, it’s gonna hit you at one point,’ and it did as he came off the field,” said Impact head coach Mauro Biello. “But in the end those are tears of joy for sure, for the career that he had.”

Many could have wondered why Bernier was subbed off at the 81st minute as opposed to a few seconds before the game ended. The answer to that was that Bernier actually asked to be substituted off a little earlier for Shamit Shome, a young homegrown player who hadn’t recorded a minute with the team yet.

“[…] I told myself that if I subbed off a little earlier it would give him ten minute of real, in-game feel,” said Bernier. “I could have faked and continued but I knew that he was supposed to play and because of the level of the game, he didn’t get his chance so you tell yourself that if the young player who will continue playing could get some minutes instead of seconds and to say that he’s the guy that came on for Patrice Bernier, there’s all that.”

Bernier’s selflessness is something that is very much known and appreciated by all in the locker room. Piette, who only joined the team in the summer, knew that Bernier may have refused the penalty if it was for the better interests of the team.

“Patrice is a very generous man, he often thinks of others before himself,” said Piette. “I’m happy that tonight, we gave him the penalty, he deserved it. But if the game would have been [a win at all costs game] Ignacio Piatti is our best penalty taker and I wouldn’t have been surprised to see Patrice leave it to him to make the team win.”

Leadership and owning up to the armband of his hometown team was also a very important thing for Bernier. Leading by example was his preferred way of operating and something that Biello held respect for.

“He’s the oldest on the team but he didn’t miss one training session this year and that’s an example set to others,” said Biello. “In the end, he’s a leader by example and it’s something that, in terms of his approach and his preparation, is something that a lot of the younger players can learn from.”

Bernier will continue to share his example to younger players as the next step in his career will be a coaching role within the Impact Academy. Having already spoken to Academy technical director Philippe Eullaffroy and sporting director Adam Braz, Bernier will take a resting period and slowly adapt to his new working environment.

“It’s a bit of anxiety but also curiosity, I’m in the same world of football but but in coaching which is not something that I know on a regular basis,” confessed Bernier. “I’m excited because it’s about seeing how I will share my experience and see how the academy works and slowly work in another role.”

A teammate since the start of the team’s MLS era, Hassoun Camara has no doubt that Bernier will thrive as a coach within the Impact’s system.

“It will take some time but I’m convinced that he will make a good coach. He is someone that is very intelligent and that knows football by heart,” said Camara. “I got to see the amount of books in the [hotel rooms] when we were on the road, he is inspired by the philosophy of the likes of Pep Guardiola and Johan Cruyff and that’s what he tries to transmit on the field.”

All in all, Bernier is happy that he inspired young players in Montreal to play soccer. It is with joy and pride that he will welcome some of them in a few months when his transition to coaching will be complete.

“I’m just happy when a young player later on says that they came [to a game], saw me play and that’s what inspired him to come to the Impact and to become a soccer player,” said Bernier. “Before all, I wanted to perform, sell soccer, sell the Montreal Impact and to show that Montreal is not only a place for hockey.”