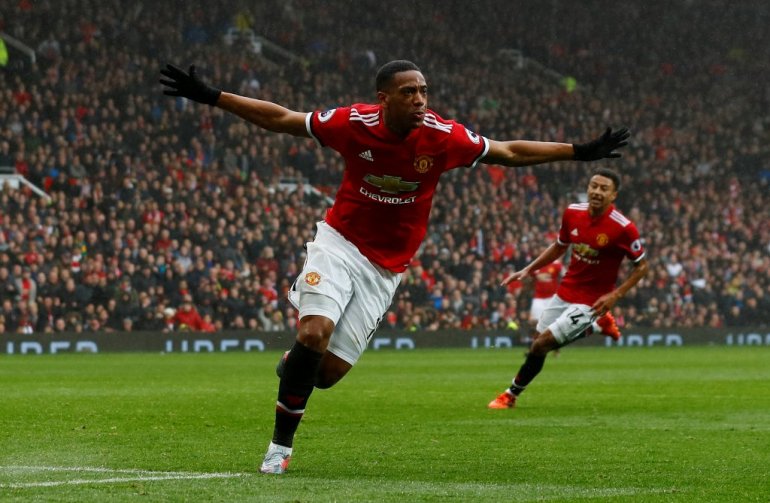 Two of the Premier League’s heavyweights duked it out at Old Trafford on Saturday as Manchester United faced Tottenham Hotspur. Jose Mourinho’s men used an 81st-minute winner from Anthony Martial to snatch the three points at home. Martial slotted home Romelu Lukaku’s through-ball past Hugo Lloris, which was all the Red Devils needed to stay in second place. David de Gea made four saves in the clean sheet, which was United’s fourth in their last five matches. Spurs remain in third with the road defeat, their second loss in as many matches across all competitions.

Elsewhere, Manchester City traveled to West Brom looking to remain atop the league table. Barcelona faced off with Athletic Bilbao away from home, while Atletico Madrid hosted Villarreal. Bayern Munich faced RB Leipzig for the second time in as many matches, while Juventus faced a tricky test at AC Milan.

Here’s a rundown of all Friday and Saturday’s European action:

Manchester City remained top of the EPL table on Saturday after a 3-2 road win at West Bromwich Albion. Leroy Sane kicked off the scoring in the 10th-minute from a left-footed rifle of a finish. Jay Rodriguez answered back for West Brom just three minutes later, as he finished off Gareth Barry’s assist. Fernandinho’s deflected effort in the 15th-minute regained the lead for Man City. Raheem Sterling tapped home City’s third just after the hour mark, before Matt Phillips scored one late for Tony Pulis’ side. Pep Guardiola’s men remain unbeaten, while West Brom drop to 14th.

In a thrilling London Derby at Selhurst Park, Crystal Palace fought back for a 2-2 draw against West Ham United. The Hammers saw a two-goal lead falter after halftime, despite goals from Javier Hernandez and Andre Ayew. Luka Milivojevic started the comeback for the Eagles in the 50th-minute from the penalty spot. Wilfried Zaha sent the South London stadium into chaos after scoring Palace’s equalizer in the 97th-minute. Palace dominated the shots on goal by a nine-to-two margin, but remain in last place. West Ham are in 16th and winless in their last three league matches.

Barcelona remained unbeaten in La Liga this season, defeating Athletic Bilbao 2-0 away from home. An insurance goal from Paulinho in the 92nd-minute guaranteed the points for Ernesto Valverde’s men, who held onto a 1-0 lead for most of the match. Leo Messi’s 12th league goal of the season, opened the scoring for Barcelona in the 36th-minute. Marc-Andre ter Stegen made five saves in the clean sheet, while Bilbao dropped their second in a row in league play.

The points were shared at the Wanda Metropolitano as Villarreal fought back for a 1-1 draw against Atletico Madrid. Carlos Bacca’s header in the 81st-minute earned Villarreal a share of the points, after going down earlier in the second-half. Angel Correa’s fourth goal of the season gave Atletico a 1-0 lead after the hour mark. Villarreal’s Mariano Barbosa made five saves in the draw, which keeps the visitors in sixth. Atletico remains in fourth after suffering their fourth draw of the month across all competitions.

The top match of the weekend in Germany came from the Allianz Arena as Bayern Munich hosted RB Leipzig. Josef Heynckes’ side used a pair of first-half goals to down their opponents for the second time this week. James Rodriguez’s left-footed finish in the 19th-minute gave Bayern a 1-0 lead. Robert Lewandowski slid home Javi Martinez’s through ball assist for the hosts second goal, which was all they needed to earn three points. Leipzig was held to one shot on goal, playing with 10 men for a majority of the match. Bayern jumped into first place with the win.

Hannover snatched a huge three points at home on Saturday, defeating Borussia Dortmund 4-2 at the HDI Arena. Ihlas Bebou netted a brace for the hosts, who pulled away after seeing Dortmund tie the score at 2-2. Jonathas’ penalty kick goal in the 20th-minute made it 1-0 Hannover. Dan-Axel Zagadou leveled the score for Dortmund just seven minutes later. Bebou’s left-footed finish retained the lead for Hannover just before halftime. Andriy Yarmolenko drew Dortmund level in the 52nd-minute from his own left-footed strike. Zagadou was sent off in the 59th-minute for a bad foul, before Felix Klaus scored from a free-kick a minute later for Hannover. Bebou stamped the final score at 4-2 in the 86th-minute on a fast break. Dortmund dropped to second place with the loss, while Hannover made it back-to-back home wins.

Juventus used a brace from Gonzalo Higuain to defeat AC Milan 2-0 at the Giuseppe Meazza. The Argentine opened the scoring in the 23rd-minute from a right-footed finish. Paulo Dybala was credited with the assist on Juventus’ opener. Higuain doubled his tally and his side’s lead after the hour mark, again slotting home with his right foot. It gave the 29-year-old seven goals so far this season across all competitions. AC Milan fell for the third time in October, while Juventus have won three consecutive league matches.

PSG cruised their way to three points on Friday at the expense of Nice in a 3-0 victory. Edinson Cavani netted a brace for Unai Emery’s side, while an own-goal by Dante added to the scoreline. Cavani opened the scoring in the third minute from a header. The same duo struck again for the Parisians as Angel Di Maria assisted on Cavani’s second goal of the match, this coming in the 31st-minute. An own goal off of Dante in the 52nd-minute capped the points for PSG who were in control from the opening whistle. Nice remains in 14th and could drop lower with other results this weekend.

Monaco made it back-to-back league wins on Saturday, defeating Bordeaux 2-0 on the road. Following a scoreless first-half, the visitors opened the scoring in the 57th-minute as Keita slotted home Joao Moutinho’s assist. It was the striker’s second league goal since joining over the summer. Thomas Lemar doubled Monaco’s advantage in the 65th-minute from a right-footed finish inside of the box. Boredaux had four shots on goal, but eventually fell for the second consecutive week.