Timbers depth on display after rash of injuries in Houston 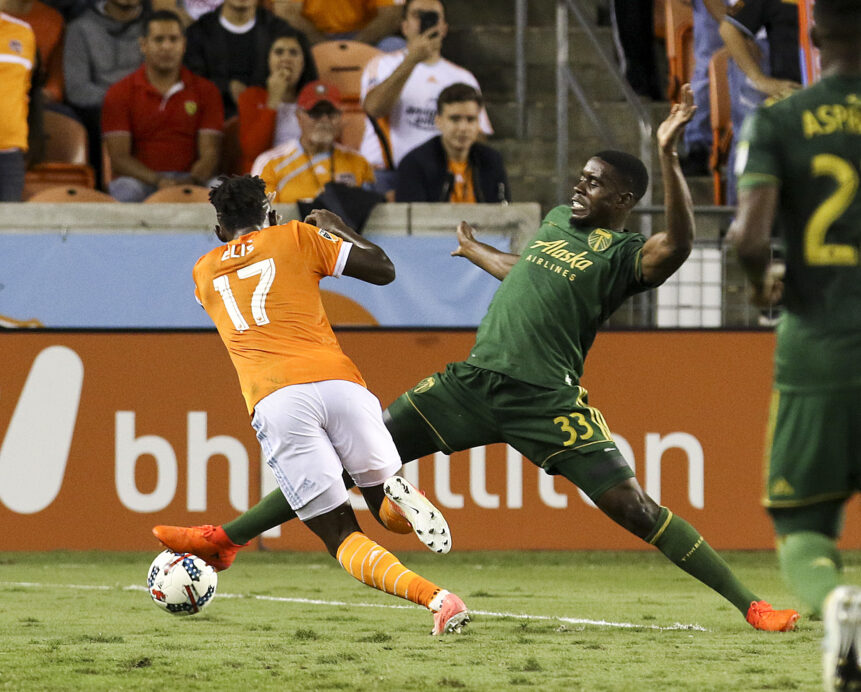 After a 0-0 draw with the Houston Dynamo, the Portland Timbers are leaving Texas with a clean sheet in the first leg, but they are taking back a few unwanted knocks to Sunday’s second leg back at Providence Park.0

Three key players all had to leave the match early due to uninvited injuries. Defender Larrys Mabiala came out just before half time with a hip injury. Diego Chara broke his foot also just before the break, and was subbed off at the start of the second half. Finally, Darlington Nagbe experienced some calf tightness and was unable to continue after the 59th minute.

Thankfully for the Timbers, that final sub was precautionary according to head coach Caleb Porter.

“[He has] a little bit of a tigh calf but I think he was just making sure he didn’t do it. I think he’ll be OK,” he said after the match.

Chara, on the other hand, is guaranteed to miss out on Sunday’s home leg.

“Chara looks to be out. I think he fractured a fifth metatarsal. It was non-contact. It’s strange, but it is what it is,” said Porter.

The Timbers boss had no comment on the status of Larrys Mabiala. “We’ll see,” Porter said. “It’s a hip.”

These injuries will test the depth of a Timbers team that’s seen players rotate in and out of the squad all year long. Even in Tuesday’s playoff opener the team had regular starters in street clothes.

Nigerian striker Fanendo Adi has been out since early August with a hamstring strain. His absence has allowed Darren Mattocks to step up and score some big goals.

Argentinian winger Sebastian Blanco missed Tuesday’s match after spilling boiling water on his foot while cooking. Dairon Asprilla took his place against the Dynamo, but he should be ready to go for the second leg.

Finally, midfielder David Guzman picked up an LCL sprain in the regular season finale against the Vancouver Whitecaps. Lawrence Olum, who’s seen a lot of time in both midfield and central defense, was able to fill in adequately on Tuesday night.

Porter hopes to have most of these guys back in action on Sunday night when the Dynamo return to Portland for a winner-take-all second leg, but he knows his team has the depth it needs to get through missing a few starters.

“We’re where we’re at in the playoffs because of our depth dealing with a crazy amount of injuries,” he said. “We’ve got guys like Roy Miller coming in to the game and Lawrence Olum and Amobi Okugo coming into the game and Dairon Asprilla and Jeremy Ebobisse. So that’s what this team is about. This team is not about 11 players. It’s about 20 guys that want to win and want to do something special.”