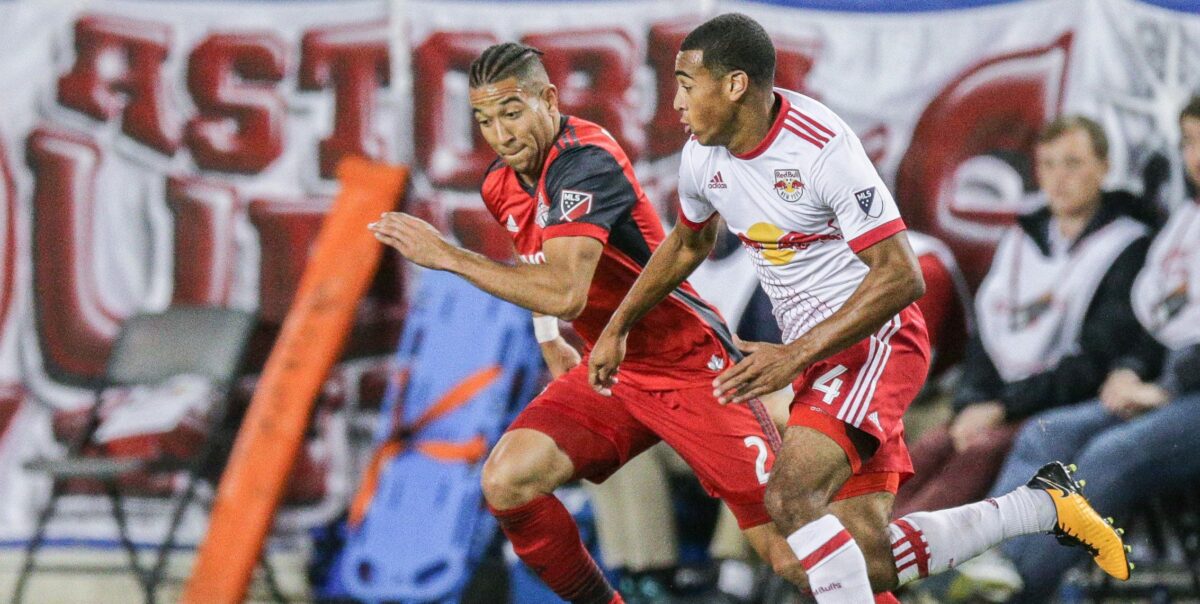 Toronto FC’s 2-1 win over the New York Red Bulls on Monday night seemed like usual business in some ways. The Designated Players stood out, with Jozy Altidore having a strong night up front and Sebastian Giovinco grabbing the game winner from a freekick as the team collected yet another victory this year. Though the match ended in success, Toronto’s first playoff game was not standard fare.

“It was not like we came out and by any stretch of the imagination were blowing the doors off of [the game],” as Toronto head coach Greg Vanney put it following his team’s win.

That kind of play is something many are used to seeing from the 2017 Supporters’ Shield champions, but the match against the Red Bulls saw Toronto control the ball less and absorb opposition pressure more. Despite not necessarily dominating, Toronto never felt out of it. Part of that is down to the much-discussed attacking talent, including Victor Vazquez, who grabbed the game’s first goal after only eight minutes. Much of it also comes down to the defensive unit.

“Getting a hold of possession for long stretches just wasn’t there for us tonight,” Vanney said, “but the guys pulled together, and we kept our shape defensively, and again, protected our goal.”

Though the Red Bulls managed to record 12 shots, only four of those were on target. The likes of Bradley Wright-Phillips, Sacha Kljestan, and Daniel Royer, frequent offensive contributors this year in MLS, were kept quiet by the Toronto defense. The defensive unit frequently cut off opposition attacks, making it difficult for the Red Bulls to get any significant rhythm going for a majority of the match.

“When our backs are against the wall, these are the guys that are bailing us out,” said Bobo, “and making it so the goals [the stars of the team] score fantastically, better than any other team in the league, hold up.”

“To me, the players that played the best today were the back three and the back five.”

Bono, as part of a strong defensive performance, recorded three saves on the night in what was his first MLS Cup playoff match.

“I think ever since we’ve given him an opportunity that he’s grown with the experiences that he’s gained,” Vanney said about the goalkeeper. “More and more of these games like this are just going to help him to be even a better goalkeeper.”

The playoffs present a different challenge to the regular season, as games “take on a life of their own,” according to Michael Bradley. MLS history is full of teams who have performed at a very high level throughout the course of the regular season, only to fail in the playoffs. So far, though, Toronto’s quest to get back to the MLS Cup final continues in strong form, even with a match that was unlike many of the last seven months.

“You can’t think that everything you do in the regular season is going to translate the same way on these types of nights,” Bradley said. “You have to
embrace that.”