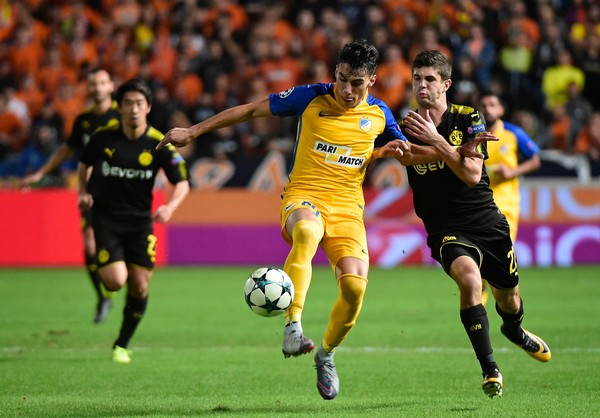 There were some lopsided wins in Champions League play on Tuesday afternoon, but two of the most important results were low-scoring ties.

Group H play saw a pair of ties, but Borussia Dortmund’s draw with lowly APOEL might be the reason for their elimination when all is said and done. The German leaders were held to a 1-1 draw with the Cypriot side, as Mickaël Poté opened the scoring for the underdogs in the second half. Sokratis Papastathopoulos brought Dortmund back just five minutes later, but it wasn’t enough as Christian Pulisic and co. were held to just one point.

After losing their opening two group stage matches to Real Madrid and Tottenham, Dortmund has just one point through three games and will need to make up major ground in the final three matches of the round.

Here’s a closer look at some more of Tuesday’s results:

All things considered, Tottenham will be happy with their efforts on Tuesday afternoon.

The Premier League side took a point from Madrid on Tuesday in a 1-1 draw with the reigning Champions League winners. The draw keeps the two teams level atop the group with seven points through three games.

Spurs opened the scoring 26 minutes in as Raphael Varane was hit with an own goal. Cristiano Ronaldo fired back with a penalty kick just before halftime to level the scoreline and, in the end, take a point.

Manchester City has put a beating on teams in recent weeks with lopsided scorelines galore. Tuesday’s match wasn’t lopsided, but it was a good win nonetheless.

Pep Guardiola’s side took down Italian powerhouses Napoli, 2-1, at the Etihad on Sunday. With the win, Man City remains perfect through three games while Napoli falls behind Shakhtar Donetsk and into third place in the group.

It took just nine minutes for Raheem Sterling to open the scoring, giving Man City the early lead. That lead was doubled just four minutes later through Brazilian Gabriel Jesus. Amidou Diawara’s penalty kick in the second half was merely a consolation as Man City earned a home in.