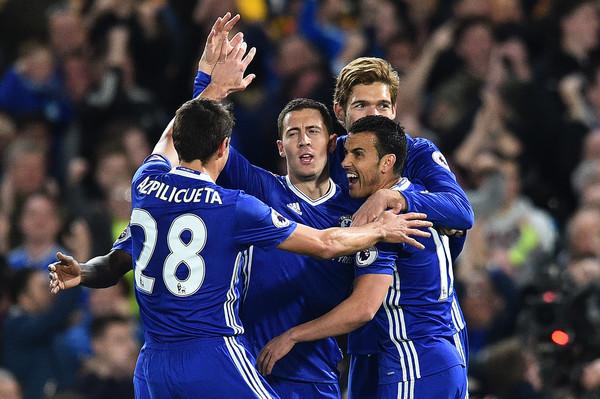 Leading the way is a clash between heavyweights as Chelsea plays host to Roma in the match of the day. While Chelsea has been struggling in the league, the Blues will be favored at home against a Roma team that’s fallen a bit behind in the Serie A race.

Injuries of Note: Chelsea will be missing some midfield bite due to N’Golo Kante’s recent injury, while Danny Drinkwater and Victor Moses are also out of action. The biggest loss may be Alvaro Morata, though, who is doubtful due to a hamstring issue. On the other end, Roma’s big loss will be the absence of central defender Kostas Manolas, likely leaving Juan Jesus and the lumbering Federico Fazio as the central pairing.

Key to the Game: The midfield battle will be an interesting one, especially with Kante out. Chelsea’s three-at-the-back system allows them to overload the midfield at times, but Roma is plenty capable with stars like Radja Nainggolan, Danielle de Rossi and Kevin Strootman in the middle of the field. That battle in the center could go a long way towards finding a winner.

Player to Watch: If Morata can’t go, it’ll be up to Eden Hazard to lead the attack. The Belgian is always a dangerous weapon but he’ll face a tough test going up against a speedster in Bruno Peres on the left side.

Quote: “That’s the Premier League. You can win against the best teams and lose against the last,” said Roma forward Eden Dzeko. “Chelsea are a great team with some amazing players. Tomorrow will be a different game and it’ll be more difficult for us than it was for Crystal Palace. Tomorrow it’ll be an angry but tough team. Knowing the coach, he will put pressure on them, but we haven’t come here to play and lose. We’ve come here to give our best and get a positive result.

Injuries of Note: Ousmane Dembele is out long-term for Barcelona while Rafinha’s knee will keep him out and Arda Turan is doubtful, robbing the team of two central midfield options. Olympiakos will be without dangerous striker Emmanuel Emenike due to a calf issue.

Key to the Game: At the end of the day, Barcelona is Barcelona, and they’ll be expected to dominate. They’ll have plenty of possession but, if Olympiakos can keep the defense tight, they can make things difficult against one of the tournament’s contenders.

Player to Watch: Lionel Messi is fresh off of a performance that single-handedly carried Argentina to the World Cup. The Barca star is in good form and could pull out something special on Wednesday.

Quote: “My sensation is that we will go out and play to demonstrate that we are a good team,” said Olympiakos coach Panagiotis Lemonis. “That’s our plan. We know how hard it is to beat a team like Barcelona. It’s not just a question of a little bit of luck in your favor … it’s more complicated than that. But we’ll give everything we have. For sure.”

Injuries of Note: Manchester United has a series of injuries currently, headlined by Paul Pogba. The Frenchman is joined on the sidelines by defenders Marcos Rojo and Eric Bailly while midfielders Marouane Fellaini and Michael Carrick are also injured. Benfica is healthy in comparison with only André Almeida set to miss out due to suspension.

Key to the Game: With both Pogba and Carrick out, Manchester United will need to move things around in midfield. Ander Herrera is rock-solid, but he’ll need to be paired with someone like Daley Blind to allow attackers like Henrikh Mkhitaryan room to roam. If Man United gets a bit too aggressive, Benfica is talented enough to cause problems.

Player to Watch: Brazilian forward Jonas has been tearing the Portuguese league apart for several seasons, and he should be a handful for the Manchester United defense on Wednesday.

Quote: “We know United are very strong, but we want to impose our ideas,” said Benfica winger Eduardo Salvio. “I don’t feel inferior to anyone. They have great players; so do we. We trust in every player and we know that we can cause United problems. I am on a high after helping Argentina to qualify for the World Cup, but tomorrow my motivation is playing a very strong side in the Champions League.”