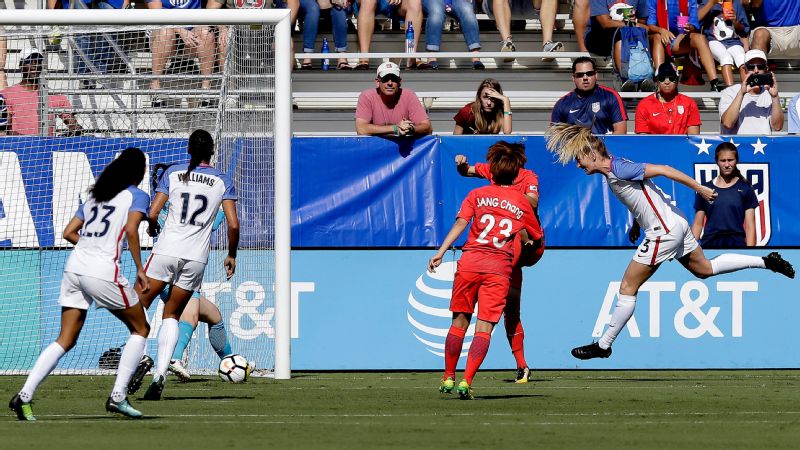 Though the U.S. Women’s national team collected another victory over South Korea, the second matchup between the two sides did not resemble the first one three days earlier.

For starters, there were more goals the second time around, as the the USWNT put six past South Korea at Sahlen’s Stadium, and coupled that with a clean sheet. They dominated from start from finish this time, giving their opposition little time on the ball.

Additionally, the side Jill Ellis put out looked much different from the one she played the first time against South Korea. Changes were coming as Mallory Pugh and Andi Sullivan withdrew from the squad, but she made five changes to the lineup, and then rotated even more at the start of the second half.

Here’s a closer look at some of takeaways from the match:

Jill Ellis’s lineup featured seven outfield players with less than 50 caps for the national team as she rotated her team after only two days in between the first and second matches against South Korea. Four of those players ended up on the scoresheet either as goalscorers or grabbing assists, with the defensive players recording a clean sheet.

They set the tone early on, as Samantha Mewis, currently with 32 caps, scored twice in the opening 20 minutes. This group continued to put the game out of reach for South Korea, as Abby Dahlkemper, now with 11 caps, and Lindsey Horan, holding 41 caps, recorded assists in a first half that ended 4-0.

Another one of the starters, Lynn Williams, in her 13th cap, got in on the fun also, scoring her fourth international goal in the 61st minute, while Horan tallied a second assist minutes before full time.

As part of the backline, Dahlkemper, Casey Short, holding 17 caps, and Sofia Huerta, on her third cap, helped keep a clean sheet.

Samantha Mewis recorded her first multi-goal game for the national team as she continues to prove herself to be indispensable for the U.S. team.

The midfielder has started every one of the USWNT’s 14 matches this year, proving to be one player that Ellis simply cannot drop. Her strong year has seen her not just earn a bigger role with the national team, but collect NWSL Best XI honors this year with the North Carolina Courage.

Ellis had challenged her younger players to step, and on a field with Alex Morgan, it was Mewis who stood out the most with her goals and control of the midfield, as she proved to be crucial in the U.S.’ full dominance of South Korea.

Alyssa Naeher had played all but two of the USWNT’s 13 matches this year, but finally, her backups got a chance to play.

Starting in goal was the longtime U.S. backup Ashlyn Harris, who earned her 14th cap and first match since April. With South Korea posing less of a threat this time around, Harris was not terribly active, though made important stops when she was needed. Towards the end of the first half, she made a crucial stop by coming off her line and stopping Lee Geummin’s shot from close range.

The second half saw Harris getting replaced by Jane Campbell, who earned her second cap, her first coming in April. Campbell was probably less active than Harris, though she proved to be reliable in the shots she had to stop.

This is not the first time Harris and Campbell split a game, doing so in April’s 5-1 victory over Russia. Despite doing their jobs, Ellis has never been one for intense goalkeeper rotation, playing Hope Solo until she no longer could. The case has been the same thus far for Naeher, the U.S.’ number one.

Despite the many changes to the lineup, Ellis kept center back pairing Becky Sauerbrunn and Abby Dahlkemper together, making it the fifth straight time the two have started together in the center of defense.

Sauerbrunn is obviously the more experienced of the two, and managed a fine shift in her 45 minutes of game time at Sahlen’s Stadium, though Dahlkemper is clearly still learning the international game. There were no glaring errors on the NWSL Defender of the Year’s part, and she even tallied an assist, she has not matched the quality of Sauerbrunn, though for someone with only 11 caps, it is understandable.

Regardless, this seems to be Ellis’s center back pairing for the foreseeable future, though options at the position remain thin. Julie Ertz slotted in there for the second half after Sauerbrunn came off, but is preferred as a defensive midfielder. Casey Short, another option, is currently a top option for Ellis in the fullback positions, and Taylor Smith is currently out with injury.

STRONG FIRSTS FOR HUERTA AND ZERBONI

The match marked Sofia Huerta’s first start for the U.S. in her third cap, while McCall Zerboni recorded her first ever cap.

Huerta, known for being a forward throughout her career, started at right back, where Ellis has played her earlier. She played 90 minutes in what was a solid, if a bit quiet, match. Another player that Ellis converted to a different position, she adds right back depth, though Casey Short appears to be the first choice for the time being.

Zerboni, the USWNT’s oldest debutante, came on at halftime in her first appearance. Slotting into her familiar deep midfield role, she aided the U.S. as they continued to keep South Korea out of the game. Stopping the few South Korean attacks that came her way, it was a consistent first outing with the national team.