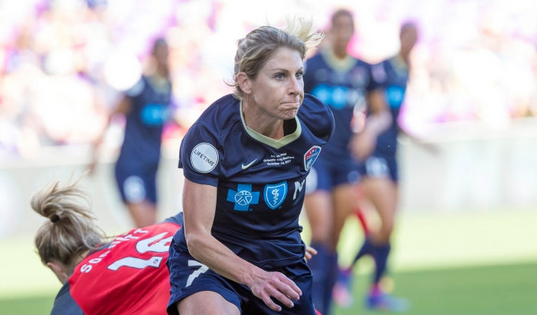 The U.S. Women’s national team is fresh off a dominant performance against a South Korea side that is technically gifted, but gassed out quickly against the world champions.

The situation may probably be the same as the two face off again on Sunday at Sahlen’s Stadium, though the squad Jill Ellis has in North Carolina is not.

After the injury that Mallory Pugh picked up in the team’s 3-1 victory on Thursday, and Andi Sullivan’s return to Stanford, the squad was down to 18. Ellis could have left it there, as she only dresses 18 players for match day, but instead invited someone new to bolster the squad, North Carolina Courage’s McCall Zerboni.

A veteran of the many leagues the women’s side of the game has seen in the United States, Zerboni, at age 30, is finally starting to settle down and is enjoying some of the best soccer of her career. Landing at the Western New York Flash last year, the central midfielder was crucial as they collected the NWSL Championship. This year with the Courage, she again played a vital role as they collected the NWSL Shield and she earned NWSL Best XI honors.

The call up may be partly out of convenience; the Courage play at Sahlen’s Stadium, and Zerboni’s travel arrangements were easy to make. That does not make her selection any less deserved, with club teammate Samantha Mewis feeling she has earned a spot on the team.

“She’s going to hopefully just fit in seamlessly,” said Mewis, Zerboni’s midfield partner over the last two years. “She’s such a professional, so I’m really excited to get to play with her in this environment.”

Should she earn her first cap, Zerboni would be the USWNT’s oldest debutante, though from there, the road to sticking around is not easy. Earlier in the week, Ellis asked if there was “someone still out there” to come into the team, adding that she “like[s] the core of the group.”

With that being the case, it is fair to think that Ellis may not change out some of her starters from Thursday. Over the last three friendlies, the lineups have looked almost identical, with the most rotation coming in the advanced midfield role. That position will definitely have a change, as Thursday’s starter Sullivan has left camp, as has the left forward position, where Pugh started on Thursday.

While it seems Ellis is beginning to settle into a first-choice lineup a year away from World Cup qualifying, the lack of rotation is beginning to wear on the players. Everyone in camp but Chelsea’s Crystal Dunn play in the NWSL, and are on the back end of a long season. That was evident in goalkeeper Alyssa Naeher’s performance on Thursday; though her struggles were not exposed to a great degree, she was clearly tired after playing an entire club season and only missing two of the USWNT’s 13 matches thus far.

Yet, with only two days in between the two matches, Ellis may rotate her side, anyway — and that may include the long-awaited first cap for Zerboni.