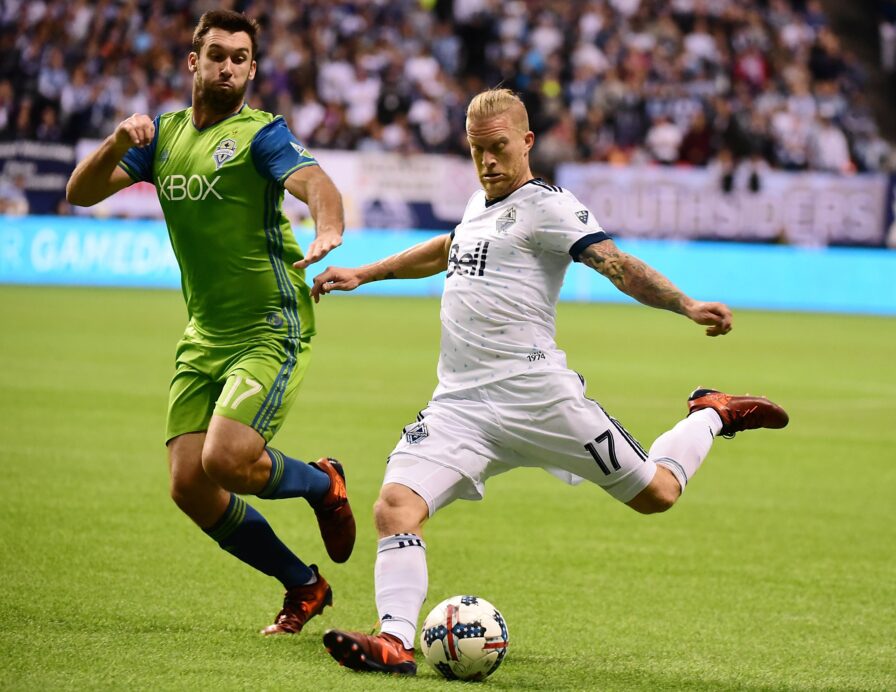 Many would look at a 0-0 home draw in the first leg of a playoff series as a negative, but the Vancouver Whitecaps are confident in their position heading into Thursday’ second leg in Seattle.

The most important goal achieved by the Whitecaps on Sunday night at BC Place was not conceding a goal to the visiting Seattle Sounders.

“It was important we didn’t concede today,” Whitecaps manager Carl Robinson said. “In two-legged ties, I think that conceding at home is a no-no. I learned that two years ago so that was the mindset. We can better going forward. We set up slightly tactically different today and it worked. They defended for their lives and they were excellent. Credit to them for that so I’m fairly happy.”

“I didn’t want to give anything away in the home leg,” Robinson said. “The football wasn’t brilliant. We possessed the ball well in the first half and we weren’t creating shot after shot, but they had nothing either.”

The Whitecaps admitted they played in a chess game of sorts with their rivals from Cascadia, one that saw the home side use an altered formation with Yordy Reyna and Cristian Techera on the bench.

“I said in the build up it was going to be a chess match and I think you saw that,” Robinson said. “We’re known to be a very good counterattacking team and very good on set pieces. We possess the ball a lot better today, which we can do in certain times and without the counterattacking there weren’t enough free kicks given, which was frustrating in my eyes.”

“We wanted to not concede any goals because if they score (Thursday) it’ll be over,” Whitecaps defender Marcel de Jong said. “It was a bit of a chess game, but at the end I think it was a good defensive performance. We were maybe a little bit off, we could’ve done a little bit more I think, but I’m confident.”

The additions of Reyna and Techera in the second half didn’t bring a huge spark to the Whitecaps attack, but the minutes they earned showed Robinson what each player has after picking up knocks in the knockout round win over the San Jose Earthquakes.

Robinson didn’t want to risk the health of those attacking players, and it might turn out to be the right call since an away goal counts for more in the series. With both attackers fresh for the quick turnaround to Thursday, the Whitecaps should be poised to counter more, a style they enjoy playing.

“I would’ve put out the same team if those guys were fit, but they weren’t and I think you saw in the 20 minutes that they played it was the right decision because they weren’t as lively as they were on Wednesday night so everything plays into your mind when you play a two-legged series and for those two guys it worked out well because hopefully they’ll be fully fit in three days,” Robinson said.

As for how the second leg will play out at CenturyLink Field on Thursday, Robinson knows he’s going to need a combination of a strong performance and luck to get through to the Western Conference Final.

“We know we can play better, but it’s about how well you play. I’ve been in enough games where you play really well and don’t win the game in finals or cup knockout football and that’s where we are,” Robinson said. “It’s about finding a way to win. We’ve done it all season. We go on the road to a difficult place, they’re reigning champs for a reason. But we have to find a way to win and we will certainly try and find a way to win. How that way is I can’t tel you because I’m then giving you my secrets.”

But as treacherous as the task may be in the second leg, the Whitecaps are still confident they can get the job done.

“Of course we wanted to win every game,” De Jong said. “I don’t feel like it’s a missed opportunity. We’re still in this and I feel confident for the next game.”