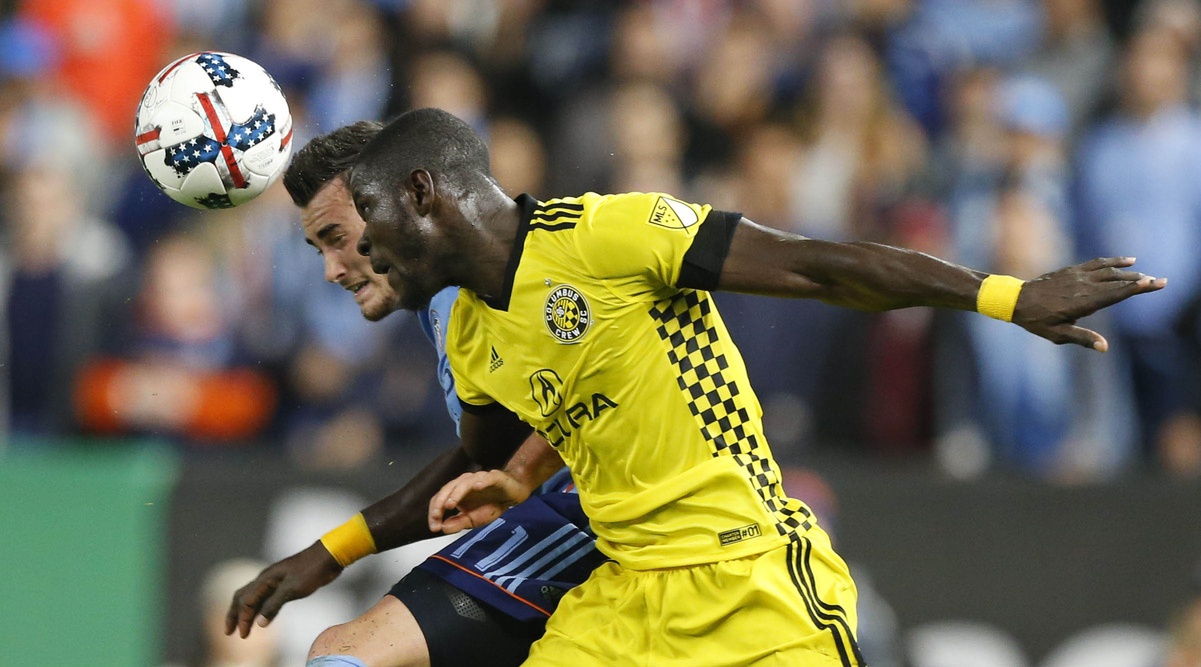 For the Columbus Crew, Sunday was about maintaining a mentality and finding a balance. Thanks to a 4-1 win in the opening leg of the Eastern Conference semifinal, the Crew simply needed to keep things calm, prevent a flurry of goals and maybe score one of their own.

The Crew played with fire on Sunday evening at Yankee Stadium. They invited pressure, and they conceded two goals with more than 30 minutes to play. They did not, however, get burned as they held off a furious comeback from NYCFC to seal a conference final date with Toronto FC.

It wasn’t an ideal performance. In many ways, it wasn’t even a good one. Following 12 games of unbeaten soccer, the Crew were thoroughly outplayed by NYCFC in Sunday’s 2-0 defeat. They did get the job done, though.

“They were on us for the better part of the game,” Justin Meram told SBI. “We just had to dig deep to prevent them for getting the third. We put ourselves in this good position. We knew it would be tough for them, but give them credit.”

“That’s the difficult part of the job, right? Coming up with a gameplan where you’re up 4-1 and you go away,” added Crew boss Gregg Berhalter. “That was our dilemma. Our DNA is not to sit back, so we high pressed them early…I think we had a good balance. I would have liked a little bit more offense, a little bit more transition.”

The Crew provided plenty of offense in the first leg at MAPFRE Stadium, and they needed every bit of it. Meram said they knew Harrison Afful’s stoppage time finish would be important from the second it went in, but nobody in the Crew locker room realized just how important until things got a little hairy on Sunday night.

It started with an early penalty kick that Berhalter viewed as “unlucky”. David Villa buried from the spot, bringing NYCFC within two. Those things happen and, even when the Spanish star’s shot torched the back of the net, the Crew still had a lead to work with.

That cushion all but evaporated just moments into the second half on a Jonathan Mensah own goal.

“I wanted to clear it, but it skipped off of my head and went in,” Mensah said. “We didn’t put our heads down. We picked it up and fought through it…We came together and just fought through it.”

There were moments of panic, though. There was the Maxi Moralez header that went just wide. There was the Rodney Wallace shot off the post. There was the diving save from Zack Steffen to stop a one-on-one chance from Jack Harrison.

Those chances evaporated, though, and now the Crew face a TFC team that’s short-handed with both Sebastian Giovinco and Jozy Altidore out. Captain Wil Trapp says there are still plenty of quality pieces on the TFC roster that can do damage, and the Crew have felt that damage in losing two of three to the Supporters’ Shield winners this season.

For two weeks, though, the Crew can rest. It’s been a whirlwind month, one Kekuta Manneh says has been “crazy” for all involved. Four games in 14 days, with one of those games going 120 minutes? That type of run will test the fitness and mettle of any team.

And then there’s the off-the-field headlines that continue to surround the team and a potential relocation. The team has paid little attention to the relocation rumors, says goalkeeper Zack Steffen.

With those two weeks, the Crew can get back to something resembling a normal schedule as they look to cotninue a postseason run that has felt anything but normal throughout.

“That’s huge. That’s something people forget,” Berhalter said. “We’ve been running hard from the last game of the season to 120 minutes in Atlanta and back home and then here. The guys are tired and they’re fatigued but what I can say is they left if all on the field. They gave every ounce of energy and I’m proud of them for that.

“We’ll have everyone back and fit and ready to go for those games,” Manneh told SBI. “It’s good. We’re playing really well lately and you never know what a week or two will do to a team, but we all know what’s at stake now: Making it to a final, and we want to win it. That’s our goal. Everyone will be fit and focused and ready for that.”