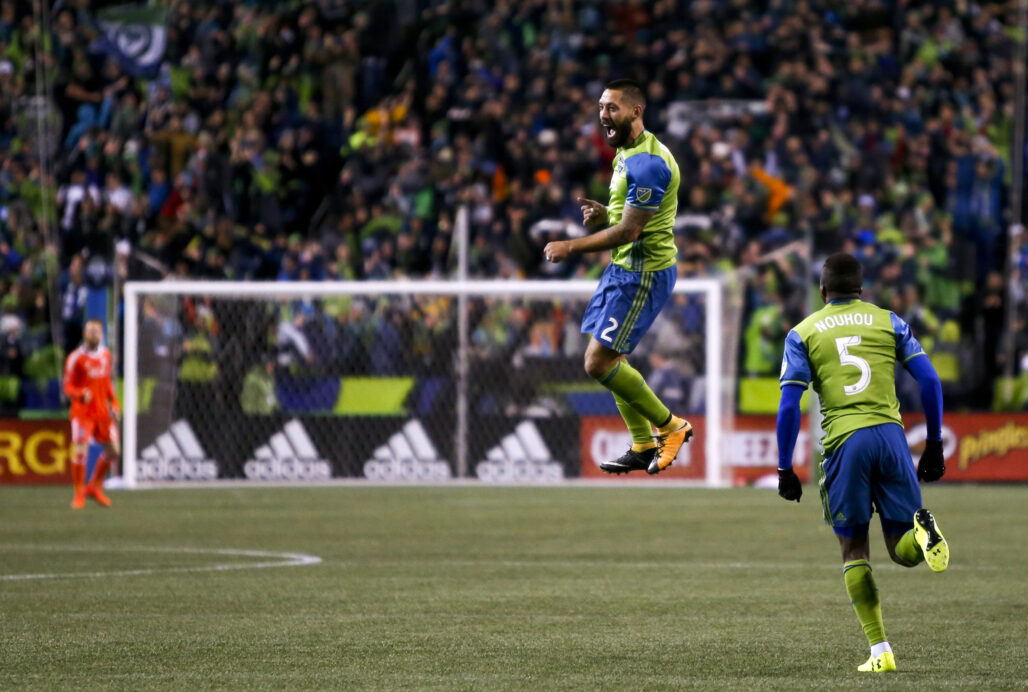 SEATTLE — It rained, it poured, it thundered. And the soccer wasn’t much prettier. But at the end of a damp night the defending champion Seattle Sounders were on their way back to the Western Conference finals.

Neither the Sounders nor the visiting Vancouver Whitecaps played attractive soccer in either match of this two-legged, aggregate-goal series. But after holding the Whitecaps to a scoreless draw in Vancouver on Sunday afternoon, the Sounders’ task on Thursday was straightforward: Win and advance.

The Sounders did just that, delivering a 2-0 win in front of 39,587 at CenturyLink Field. Clint Dempsey, returning from red-card suspension, scored the first goal of the series in the 56th minute and added a late insurance goal to boot.

The Sounders will play either the Houston Dynamo or Portland Timbers in the next round. Those teams are tied 0-0 heading into the second leg on Sunday in Portland.

After nearly 150 minutes of scoreless and not terribly dynamic soccer, the Sounders finally opened the scoring with a bit of classy buildup.

The Sounders had struggled for nearly an hour to break through Vancouver’s defensive shell. But a careless turnover by longtime Sounder Fredy Montero gifted the ball to Seattle’s Harry Shipp in the heart of the park. Five passes later, Dempsey gathered the ball at the top of the penalty area, took a touch to create space and unleashed a 19-yard, left-footed laser past goalkeeper Stefan Marinovic for the 1-0 lead.

The Whitecaps displayed an odd lack of urgency after falling behind and never threatened to equalize. Sounders’ goalkeeper Stefan Frei was called on to make but one save in the entire series, easily handling a routine header from Christian Bolanos in the 66th minute on Thursday.

The Whitecaps then fell apart on an 88th-minute corner kick. Nicolas Lodeiro played a short corner to second-half substitute Victor Rodriguez, who found Dempsey at the far post for a simple volley and the 2-0 lead.

After a cautiously played first leg, Thursday night’s match was was lively from the start. The Sounders came out on the front foot, putting up half as many shots (three) in the opening minutes as they took in the entire first leg. If the energy was there, though, the execution was not, as early passes repeatedly missed their mark and crosses sailed through the penalty area. For their part, the Whitecaps packed defenders in the box while looking to strike on the counter.

The Whitecaps were perhaps fortunate to avoid giving up a penalty kick in the 32nd minute. Defender Jake Nerwinski seemed to grab a handful of Nouhou’s jersey as the young left back streaked into the penalty area. But even after using video replay, referee Baldomero Toledo deemed the tackle clean. The foul did appear to begin outside the penalty area. Nerwinski injured his foot on the play, forcing Whitecaps head coach Carl Robinson to insert Jordan Harvey in the match and burn a first-half substitution.

The Sounders nearly opened the scoring in first-half stoppage time when Clint Dempsey volleyed a Nicolas Lodeiro cross back across the face of goal, narrowly missing a charging Will Bruin at the far post.

Clint Dempsey. After taking some heat for picking up a silly red card in the last match of the regular season, Dempsey fully redeemed himself on Thursday, sending the Sounders to the Western Conference finals for the fourth time in six seasons.

Dempsey’s first goal. Thanks to the away-goal rule, the Whitecaps still just needed a single goal to advance after falling behind. If you didn’t know the score, though, you would have thought the Sounders were the team needing a goal to advance. A one-goal lead should not have put this game to bed, but it did.

Whitecaps playmaker Yordy Reyna returned to the starting lineup, and was always going to be key to Vancouver’s hopes of winning in Seattle, but the Peruvian midfielder was invisible on a night when the Whitecaps needed him the most.