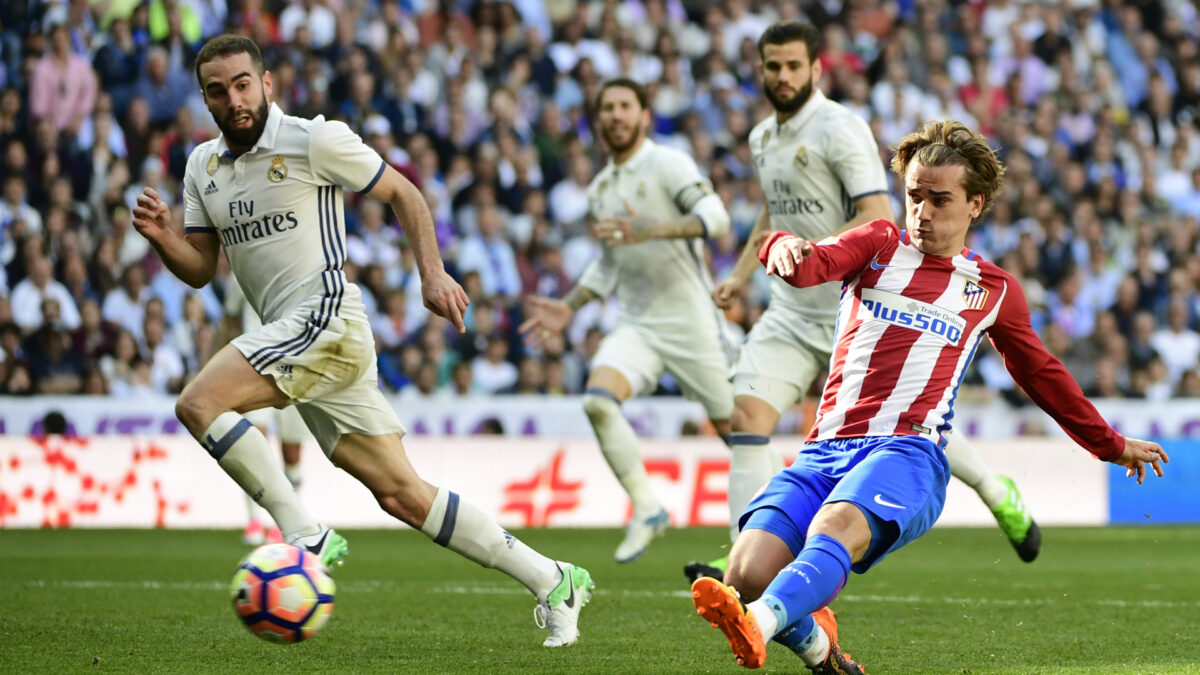 After some thrilling World Cup Qualifying playoffs, domestic action returns in Europe this weekend with some top derbies on tap. The Madrid Derby takes place on Saturday as Atletico welcomes Real Madrid to Wanda Metropolitano in a battle of third vs. fourth. Atletico are unbeaten in their last eight matches across all competitions, but have drawn six of them. Midfielder Angel Correa leads the team with four goals, while Antoine Griezmann has two. Los Blancos blanked Girona 3-0 in their last outing, after suffering back-to-back losses in both La Liga and the Champions League. Spanish internationals Marco Asensio and Isco are tied for the team lead with four goals apiece. Diego Simeone’s side are looking for their first league win over their rivals since Feb. 2015.

Elsewhere, Tottenham travels to North London rivals Arsenal on Saturday, while Manchester United hosts Newcastle on the same day. Roma hosts Lazio in a derby of their own in Italy on Saturday, while AC Milan travels to league leaders Napoli. PSG faces Nantes at home in France, while Hoffenheim welcomes Frankfurt in Bundesliga action.

Premier League action returns on Saturday with a North London Derby on tap at the Emirates Stadium. Arsenal welcomes Tottenham in a battle of two Premier League title hopefuls, and will also look to bounce back from a 3-1 loss to Manchester City. Arsene Wenger’s side are in sixth place with 19 points, and will look for their first league win over Spurs since March 2014. Tottenham defeated both Real Madrid and Crystal Palace prior to the international break, and will look to edge their rivals. Harry Kane leads the team with eight goals, and will look to continue his dominance against Arsenal.

Saturday’s final match of the day comes from Old Trafford as Manchester United welcome Newcastle to town. Jose Mourinho’s men fell 1-0 at Chelsea prior to the international break, which was their second league defeat in the past three matches. The Spaniard will look to leading scorer Romelu Lukaku (seven goals) to lead the way. Newcastle have lost their last two matches, both by a 1-0 scoreline. Scottish midfielder Matt Ritchie is a player to watch for Rafa Benitez’s side, with four assists this season.

Saturday also features league leaders Barcelona, as they travel to ninth-place Leganes. The visitors are 10-0-1 this season, and show no signs of stopping in their hopes for another league title. Lionel Messi has scored 12 of Barca’s 30 league goals this season, and is definitely carrying the team so far this season. Leganes have lost their last two league matches, which ended a six-match unbeaten run. Three players are tied with the team lead with two goals apiece. Barcelona cruised to a 5-1 victory in this fixture a year ago.

Borussia Dortmund will look to get back to form in league play, as they travel to Stuttgart on Friday. Peter Bosz’s side were thumped 4-1 by Bayern Munich prior to the international break, and are slipping down the table. Leading scorer Pierre-Emerick Aubameyang has 10 goals this season, but has been left out of the squad due to disciplinary reasons. Stuttgart have won two of their last five fixtures, and currently sit in 12th place. Congo international Chadrac Akolo leads the team with three goals so far, and will look to help the team to a huge home win.

One point separates Hoffenheim and Eintracht Frankfurt in the current league table, as the two set to square off on Saturday. Julian Nagelsmann’s side defeated Koln 3-0 their last time out, and will look to claim another three points. Strikers Mark Uth and Sandro Wagner have combined for nine goals so far, and will carry the load offensively. Frankfurt are unbeaten in their last six matches, with three wins and three draws. French forward Sebastian Haller leads the team with five goals, and has been a nice find since joining from FC Utrecht this summer.

A pair of top matches take place in Italy’s Serie A this weekend, with both kicking off on Saturday. The first comes from the Olimpico as rivals AS Roma and Lazio face off. Lazio holds the edge in points, leading 28 to 27 so far this season. The visitors are winners of their last nine matches across all competitions, allowing just five goals in the process. Italian international Ciro Immobile leads the team with 14 goals and six assists this season, and will be key in Saturday’s match. Roma are unbeaten in six straight, winning five of the six. The hosts will look to counter Immobile with Bosnian international Edin Dzeko, who has 10 goals across all comps.

Two historic clubs face off in Saturday’s late match as Napoli welcomes AC Milan to the San Paolo. Maurizio Sarri’s men are atop the Serie A table with 32 points, and are 13 points better than their opponents. The trio of Dries Mertens, Lorenzo Insigne, and Jose Callejon have combined with 18 league goals so far for Napoli. Milan are unbeaten in their last two matches, defeating 2-0 Sassuolo on Nov. 5th. Spanish international Suso leads the team with five goals, while defensively Milan will need to limit Napoli’s deadly trio of attackers.

Here’s all of this weekend’d Serie A fixtures:

In the premier Ligue 1 match of the weekend, Paris Saint-Germain welcomes Nantes to the Parc Des Princes. Unai Emery’s side have steamrolled to 32 points out of a possible 36 so far, and show no signs of letting up. Uruguayan international Edinson Cavani leads PSG with 13 league goals, while Neymar has seven from the wing. Nantes, led by former Leicester manager Claudio Ranieri, are comfortably in fifth place with 23 points. Ranieri has helped Nantes form a strong defense, allowing just nine goals in 12 matches so far. Argentinian forward Emiliano Sala leads the team with three goals.

Sunday’s midday fixture takes place from the Parc OL as Lyon hosts Montpellier. The visitors drew 1-1 with Amiens their last time out, and have also drawn PSG and Monaco already this season. Leading the way offensively for Montpellier are strikers Giovanni Sio and Souleymane Camara, who have two goals apiece. Lyon are winners of their last six matches, allowing only three goals in that span. Nabil Fekir will look to add to his 11 league goals, while winger Memphis Depay has six goals and three assists in support.