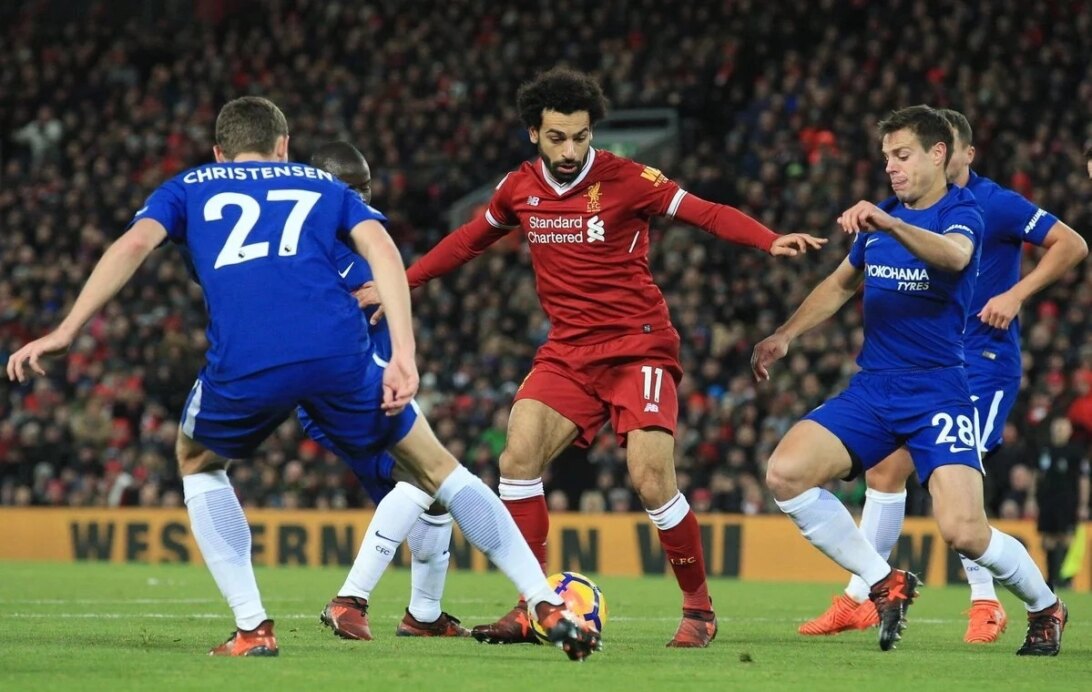 Two of the English Premier League’s historic clubs took centerstage on Saturday as Liverpool faced Chelsea at Anfield. Despite several chances from each team, the sides had to share the points in a 1-1 draw. Mohamed Salah continued his dominant run, scoring Liverpool’s opener after 65 minutes. The Egyptian finished off Alex Oxlade-Chamberlain’s assist for his 10th league goal of the campaign. Willian snatched a point for Chelsea, finishing from a right-footed effort in the 85th-minute. The Brazilian came on as a second-half substitute, and did not disappoint netting his fourth goal in all competitions. The Reds drop to sixth, while Chelsea are in third.

Elsewhere, PSG faced a trip to Monaco in Ligue 1, while Lazio hosted Fiorentina in Serie A action. Bayern Munich suffered a shocking loss in Bundesliga play, while the Rivierderby took centerstage a day prior. Barcelona faced off with Valencia in La Liga, looking to remain unbeaten.

Manchester City remained unbeaten this season, coming back to defeat Huddersfield 2-1 away from home. Raheem Sterling completed the comeback for Pep Guardiola’s men, scoring the winning goal in the 84th-minute. The English international was huge in City’s equalizing goal, drawing a penalty in the 47th-minute. Sergio Aguero slotted home from the penalty spot to draw the Citizens level for his ninth league goal. An own-goal by Nicolas Otamendi gave Huddersfield a 1-0 lead going into halftime, after the defender saw a corner kick deflect in off of his shoulder. Manchester City sit eight points clear in first place, while Huddersfield are in 11th.

Barcelona had to dig deep on Sunday to earn a point in a 1-1 draw at Valencia. Jordi Alba’s left-footed effort in the 82nd-minute drew the Catalan side level after Valencia opened the scoring earlier in the second-half. Rodrigo Moreno’s opener for the hosts, came from close range at the hour mark. The Spaniard slotted home his eighth goal in league play this season. Valencia keeper Norberto Neto made seven saves in the draw, which keeps the hosts in second place. Barcelona are four points better in first place, and are still unbeaten this season.

Sevilla fought their way back for the second time this week, downing Villarreal 3-2 at El Madrigal. The hosts led 2-0  after 53 minutes thanks to goals from Cedric Bakambu and Carlos Bacca. Clement Lenglet started the comeback for Sevilla, scoring in the 56th-minute from close range. Franco Vazquez’s long-range strike a minute later drew Sevilla level. Ever Banega, who helped set up Sevilla’s first goal, netted the winner from the penalty spot in the 78th-minute. Victor Ruiz was the guilty party, fouling Gabriel Mercado inside of the box. Sevilla sits in fifth place, while Villarreal are in sixth.

Espanyol hosts Getafe on Monday in the final match of Round 13.

The shock of the weekend in Europe came from Germany as Borussia Monchengladbach defeated Bayern Munich 2-1. Thorgan Hazard’s 39th-minute penalty kick gave the hosts a 1-0 lead, before Matthias Ginter doubled the lead before halftime. Arturo Vidal pulled a goal back for Bayern in the 74th-minute as he rifled home from long-range following a set piece. Gladbach keeper Yann Sommer made seven saves in the upset win for the hosts. Bayern remain atop the league table, while Gladbach are in fourth place.

Saturday saw an eight-goal thriller in the Rivierderby as Schalke fought back in a 4-4 draw at Borussia Dortmund. Dortmund owned the first-half, scoring all four of their goals. Pierre-Emerick Aubameyang opened the scoring after 12 minutes. An own-goal off of Benjamin Stambouli extended Dortmund’s lead to 2-0, before Mario Gotze volleyed home Aubameyang’s assist. Raphael Guerreiro extended the lead to 4-0, scoring his first goal of the season. Guido Burgstaller started the comeback in the 61st-minute as he headed in Schalke’s first of the day. Amine Harit made it 4-2 after 65 minutes from a right-footed finish. Daniel Caligiuri’s left-footed finish made it 4-3 before Naldo headed in the equalizing goal in the 94th-minute. Dortmund remains winless in their last six matches, while Schalke are in third place.

Napoli made it three wins in a row, downing Udinese 1-0 on Sunday. Jorginho played the hero for Maurizio Sarri’s side, scoring in the 33rd-minute from close range. The Italian saw his prior penalty kick saved, but pounced on the rebound for the only goal in the match. Udinese was held to two shots on goal, while Napoli had four. Sarri’s men remain atop the Serie A table, while Udinese sit in 14th.

The points were shared in the Serie A match of the weekend, as Lazio drew Fiorentina 1-1. Khouma Babacar’s penalty kick equalizer in the 94th-minute gave the visitors a share of the spoils in Rome. Stefan de Vrij opened the scoring for Lazio in the 25th-minute, heading home from a set piece. It was the Dutch defender’s third goal of the season. Felipe Caicedo gave Fiorentina a chance at a draw, after fouling German Pezzella in stoppage time. Babacar smashed home his third goal of the season, giving Fiorentina their second consecutive draw. Lazio remains in fifth, while Fiorentina drop to 11th.

Benevento travels to Atalanta on Monday in the final match of Round 14.

Paris Saint-Germain made it six consecutive wins across all competitions, downing defending Ligue 1 champs Monaco 2-1. Edinson Cavani’s 16th league goal of the season came in the 19th-minute, as the Uruguayan scored from close range. Neymar extended the lead for PSG in the 52nd-minute, scoring from the penalty spot after the Brazilian drew a foul. Joao Moutinho’s free-kick goal in the 81st-minute pulled one back for Monaco, but that was the closest the hosts would get to a comeback. Unai Emery’s side are nine points clear of Lyon atop the league table, as Monaco are in third with the loss.