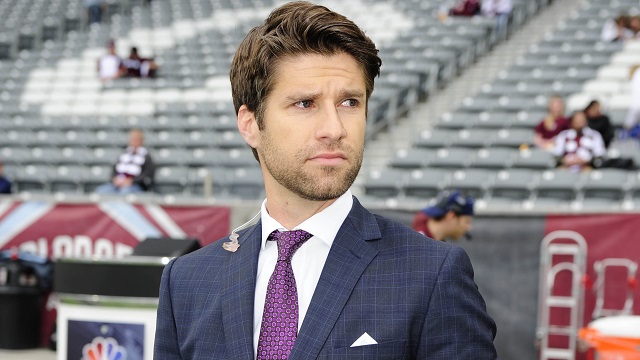 The push for the presidency of U.S. Soccer continues to add new candidates.

Kyle Martino has officially joined the list of candidates ahead of the upcoming election. The former U.S. Men’s National Team midfielder revealed his candidacy on Monday and will take a hiatus from his broadcasting duties with NBC to enter the race.

“This is not about a person for a person,” Martino said, according to the New York Times. “There’s no one person who’s going to save U.S. Soccer. This is about a consortium.

“When a club in England is failing and they’re in jeopardy of going into administration and disappearing, fans, former players, business people — they all get together with their time, experiences and resources with the sole purpose of saving a club they love. We need to do that with U.S. Soccer.

“We need a group, to step up and say, ‘Enough is enough, we’re here to save this thing.’ I can mobilize that group.”

Right now is an inflection point in history of soccer in this country. Our next choice has enormous consequences for the future of our game

— Over Under Initiative (@OverUnderPlay) November 6, 2017

With the announcement, Martino joins an increasingly crowded list of candidates for the presidency. Current president Sunil Gulati has yet to officially confirm that he will run, but is expected to be in the race for February’s election. His vice president, Carlos Cordeiro, is among the list of candidates as are lawyers Steven Gans and Michael Winograd, soccer administrator Paul Lapointe and former USMNT stars Eric Wynalda and Paul Caligiuri.

“Whoever is president has to genuinely want to work with Sunil, because that’s the only way we can bring U.S. Soccer forward,” Martino said. “Sunil has gotten us a seat at the head table. But whether Sunil runs again or not, my motivation will always be to protect U.S. Soccer from a president not capable of fixing our soccer problems. Who we need right now is secondary to what we need, which is a soccer vision.

“Carlos entering the race raises the quality of the candidates. But he’s admitted he’s not a soccer guy, and he’s saying he’s going to hire the soccer guy. I’m saying the complete opposite. I am the soccer guy. And hiring the business guy is a lot easier when that part of the company is working so well.

“The first thing people are going to say when they see that I’ve come forward is, ‘What does he know about running a $100 million company?’ But the business side of U.S. soccer is thriving. We don’t need an M.B.A. right now. We need a soccer Ph.D. And that’s what I have.”