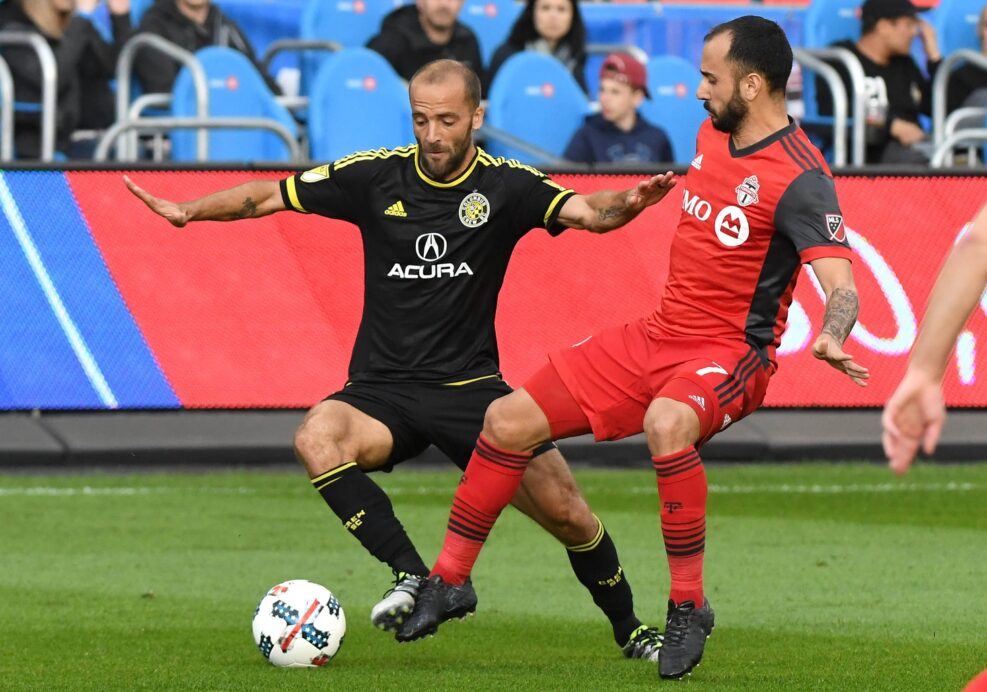 After holding on despite a furious NYCFC comeback, the Columbus Crew now face-off with a Toronto FC team that enters the Eastern Conference finals shorthanded.

The Crew, who have thrived on the field despite the relocation rumors of the last month, have everything set up for them to win the first leg in front of their home fans.

Toronto FC comes into Columbus after surviving a hard-fought East semifinal clash with the New York Red Bulls. However, the Reds will be without Jozy Altidore and Sebastian Giovinco due to yellow-card accumulation in the last round.

Here’s a deeper look at Tuesday’s showdown in Columbus.

The Crew and TFC met three times before the end of May. The Crew won the first match on April 15 at home by a 2-1 score. Toronto won at Mapfre Stadium on May 10 and then destroyed the Crew, 5-0, at BMO Field on May 26.

The stage is set for Tosaint Ricketts to step into the Toronto FC lineup and thrive in place of Altidore and Giovinco.

The 30-year-old Canadian found the back of the net on seven occasions in 22 games during the regular season. In the nine games he started up top, Ricketts scored five times, with back-to-back braces coming on Sept. 16 and 20 against the LA Galaxy and Montreal Impact.

There’s no better time for the Crew’s most impactful player over the last five years to deliver a performance to remember than Tuesday.

Federico Higuain is the star of the Crew midfield at the No. 10 position, and he’s already influenced the attack in the postseason with two assists. If Higuain can break down the Toronto back line early, it will open the Reds up and give the wingers and Ola Kamara more space to work with.

You could argue this matchup features two of the most underrated players in MLS.

Wil Trapp is the heart of the Crew midfield and he’s played well next to new addition Artur in the center of the field. The young American will be tested by Victor Vazquez, who has been one of the best newcomers in MLS.

Vazquez will be expected to have an even bigger impact on the Toronto attack with Altidore and Giovinco out. If Trapp can keep eyes on Vazquez and limit his big-play potential, it should help the Crew go into Toronto with an advantage.

Few players left in the MLS playoffs carry the experience that Drew Moor has.

The Toronto FC center back has been a part of 20 playoff contests with three different clubs, and the Reds will need to rely on that in hopes of pulling out a result in Columbus.

Toronto’s 3-5-2 system has seen plenty of success this season, and Moor is one of the main reasons. He’ll be tasked with limiting the scoring opportunities of Ola Kamara.

Beating Toronto FC’s pair of skilled fullbacks won’t be an easy task, but Pedro Santos and Justin Meram will have to break them down in order to create chances for Kamara in the box.

In his 12 games as a Crew player, Santos has recorded two assists. Tuesday would be a perfect time to show off to the home crowd why the Crew went after the Portuguese winger.

If he can get past Justin Morrow and Steven Beitashour, the Crew will not only have an advantage heading into the second leg, but they’ll have a foundation for a game plan they can implement in Toronto in eight days time as well.

It’s going to be an emotional night in Columbus with a sold-out crowd expected at Mapfre Stadium as the relocation rumors continue to speculate the Crew won’t be in Ohio for much longer.

The Crew’s run to the East final has been miraculous with a penalty shootout win in Atlanta and a domination of New York City FC in the first leg at home in the semifinal round.

If the Crew are able to use the same magic from the first leg against NYCFC, they have a chance to bury Toronto into a necessary hole with Altidore and Giovinco set to return in the second leg.

The goal for the Reds is to just put one goal in the back of the net. This is a greater possibility given the struggles the Crew defense has had throughout the season. If Ricketts can pressure one of the Crew center backs into a mistake, he could hand the visitors a critical away goal, but he’ll have to get the ball past Zack Steffen, who has played out of his mind in the postseason.