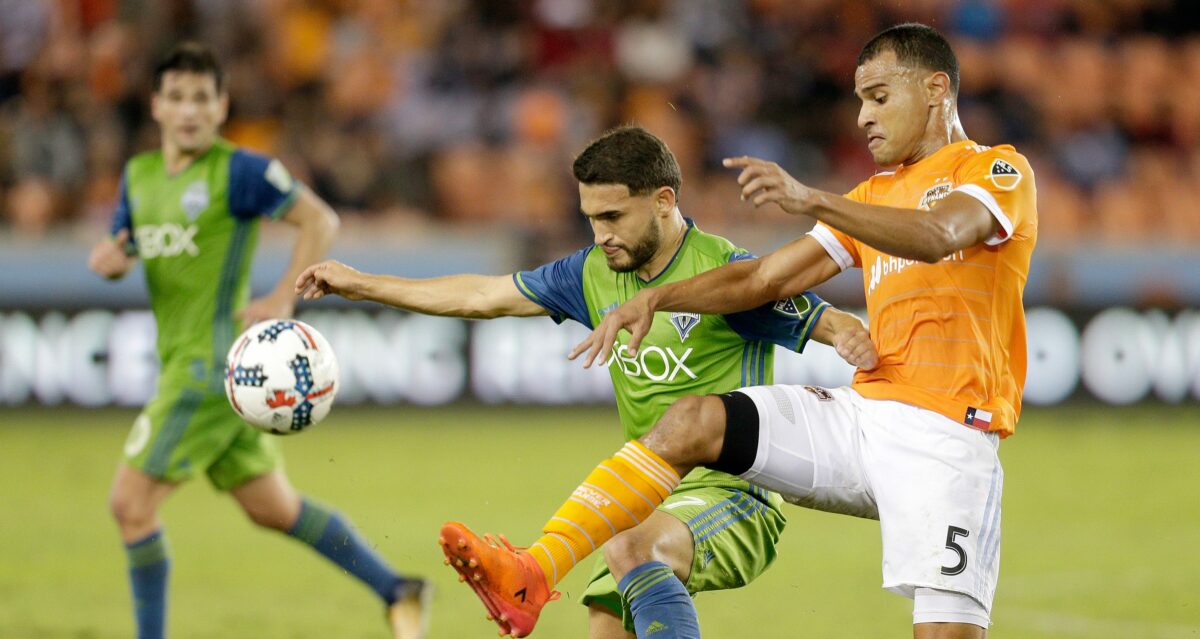 The Seattle Sounders have one foot in the MLS Cup Final. They may even have a few additional toes in there as well. But there’s still work to be done on Thursday night if the club hopes to defend last year’s crown in the very same building in which they claimed it.

Following a 2-0 win in Houston, the Sounders enter Thursday night’s clash with the Dynamo in a very good place. They have two away goals in hand as they return home to Seattle with a massive advantage and one eye on a rematch with Toronto FC.

However, the Dynamo have shown throughout the season that they do have offensive firepower, and that firepower will need to be on full display on Thursday. Hope is not lost, but it will take something special for the Dynamo to provide yet another shock en route to an MLS Cup Final berth.

The first leg was totally one-sided as the Sounders raced to a 2-0 series lead. Gustav Svensson and Will Bruin did the damage for the Sounders, who were unlucky to not find a third against the 10-man Dynamo following Jalil Anibaba’s dismissal. Fortunately for the Dynamo, Joe Willis prevented what could have been that third with a penalty kick stop of Nicholas Lodeiro, leaving a somewhat manageable scoreline as the Dynamo head on the road.

Alfaro will have to find some chemistry with Chad Marshall against a talented Dynamo attack. The good news is that there’s room for an error or two but Alfaro will largely need to be solid at the back for a Sounders team looking to protect a lead.

If Alfaro isn’t the choice, Svensson likely slides in at centerback but, for continuity sake, look for Alfaro to get the nod.

The Sounders aren’t the only team dealing with suspension as Alberth Elis and Jalil Anibaba will miss out for the Dynamo. The former’s suspension for yellow card accumulation is problematic for the Dynamo, who lose one of the team’s premier attackers in a match where they’ll need goals.

That puts pressure on the rest of the attack to step up, including Mauro Manotas, who was held all but quiet in the first leg. Another contained performance would all but doom the Dynamo.

For the Dynamo to have a chance, they’ll have to create early and often. There’s no time to waste given the deficit. The Dynamo cannot accord to bide their time or be patient. First leg deficits take that away.

That puts pressure on the Dynamo to push forward and create, and it’ll be up to Tomas Martinez to help maintain that balance. He’ll have to win that midfield battle vs. Cristian Roldan and either Svensson or Ozzie Alonso, and he’ll need to win it decisively if the Dynamo are to create enough chances to win.

For Roldan, it’s about just not making that big mistake. He’ll need to play a bit more defensively than he would like but, if Roldan can help shut down the midfield, the Sounders are all set.

Joevin Jones is a handful for even the league’s best fullbacks, and he should have a field day on Thursday. A.J. DeLaGarza is out with an injury. Anibaba is suspended. That leaves the Dynamo with a third-string defender marking a player that has the speed and technical ability to roast a defender at any time.

The Trinidad & Tobago star is a natural mismatch on Thursday night, so look for the Sounders to exploit that side frequently to try and create the one or two goal necessary to put this series to bed.

Erick ‘Cubo’ Torres experienced a major resurgence this year. After several years in the wilderness following the demise of Chivas USA, Torres jumped back into the top level of strikers in MLS with a 14 goal season for the Dynamo.

After not featuring in the opening leg, Torres is certain to see the field on Thursday, and he’ll need to make the most of it. Along with Manotas and the rest of the Dynamo attack, Torres will need to be clinical, not wasteful. If the Dynamo can get an early goal, it’s game on, and Torres is one of the most likely pieces to provide that early goal.

The outlook is simple: the Dynamo need a miracle. They need at least two goals, probably three, and they’ll need to hold a Sounders attack featuring Clint Dempsey and Nicholas Lodeiro completely quiet for all 90 minutes. It’s a daunting task, and Wilmer Cabrera admitted as much on the broadcast following the opening leg.

For them to accomplish that sort of task, they’ll need to play a perfect game. That starts at the back. There can be no mistakes from Philippe Senderos and Leonardo, and whoever fills in at fullback will need to step in with a big performance.

In the midfield, Eric Alexander and Tomas Martinez will need to control the tempo and the ball, putting the Sounders in uncomfortable situations. That’s easier said than done against a Sounders midfield that is among the best in MLS.

Then, up front, Torres and Manotas will need to be clinical, especially without the speed of Elis involved to help create dynamic situations. The Sounders will be bunkered in, and it will take a lot more than speed and power to break through. It will take creativity, a bit of luck and probably one or two bad mistakes.

For the Sounders, that’s key: limit mistakes and cruise from there. The Sounders are one step away from an MLS Cup Final, and anything other than a complete collapse will get them into a must-watch rematch against TFC.