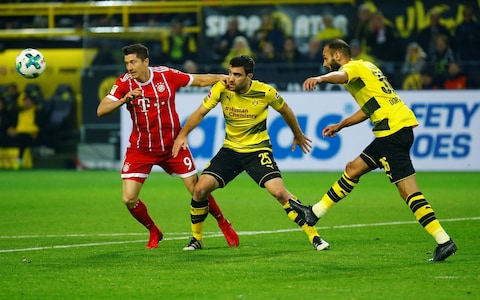 Bayern Munich continued their league dominance over Borussia Dortmund, defeating their opponents 3-1 on Saturday at Signal Iduna Park. Josef Heynckes’ side cruised their way to three points as three different players got on the scoresheet for the visitors. Arjen Robben opened the scoring in the 16th-minute as he slotted home with his usual left foot. Robert Lewandowski added to the lead prior to halftime, finishing Joshua Kimmich’s assist for a 2-0 lead. The goal of the match went to Daniel Alaba who rifled home a left-footed effort to the top right corner after the hour mark. Marc Bartra’s curled effort pulled one back for Dortmund late, but that was the closest the hosts would get to a comeback. Bayern stay atop the league table, while Dortmund drops to third.

Elsewhere on Saturday, RB Leipzig downed Hannover in Germany, while Barcelona edged Sevilla in Spain. Liverpool cruised past West Ham United in England, while Stoke City and Leicester shared the points in a four-goal draw. PSG and Monaco triumphed in Ligue 1 action, while Sampdoria downed Genoa in Italy.

Here’s a closer look at Friday and Saturday’s European action:

Liverpool made it three matches unbeaten, after they cruised past West Ham 4-1 at London Stadium. Mohamed Salah led the way for Jurgen Klopp’s side with a brace. Salah’s first goal came in the 21st-minute from a Liverpool fast break. Joel Matip added to the lead from a close-range finish three minutes later. Manuel Lanzini pulled West Ham to within one in the 55th-minute, before Alex Oxlade-Chamberlain scored his second goal for Liverpool just minutes later. Salah netted his second of the day, from a left-footed finish in the 75th-minute. West Ham are winless in their last four league matches, while Liverpool sit in sixth place.

Stoke City and Leicester shared the points at the Bet365 Stadium in a 2-2 draw. Vicente Iborra opened the scoring for Leicester from a corner-kick in the 33rd-minute before Xherdan Shaqiri equalized six minutes later for Stoke. Riyad Mahrez put the Foxes back in front in the 60th-minute as he slid home Wilfried Ndidi’s assist. Peter Crouch headed Stoke level in the 73rd-minute for his fourth goal of the season. Stoke are in 14th, while Leicester are two places better.

Barcelona remained unbeaten to start the season, defeating Sevilla 2-1 at the Camp Nou on Saturday. A brace from Paco Alcacer was all Ernesto Valderde’s side needed to claim three points. The Spaniard’s close-range finish in the 65th-minute proved to be the winning goal. Guido Pizarro’s header six minutes prior drew the visitors level after Alcacer opened the scoring in the 23rd-minute. Sevilla lost for the fourth time in La Liga play this season, while Barcelona claimed their 10th league win.

Atletico Madrid saved it to the last-minute to defeat Deportivo 1-0 at the Municipal de Riazor on Saturday. Thomas Partey’s wonderful free kick in the 91st-minute claimed all three points for Diego Simeone’s side, after it looked like the sides would share the points. Deportivo was held to one shot on goal, while Atletico had three. Atletico jump to third while Deportivo sit in 16th.

RB Leipzig snapped a three-match losing streak in all competitions, defeating Hannover 2-1 at Red Bull Arena. The hosts fought back from a one-goal deficit and was able to jump to second place in the process. Timo Werner played the hero, scoring in the 85th-minute from a close-range finish. Yussuf Poulsen leveled the score in the 70th-minute after Jonathas had given Hannover the lead prior to the hour mark. Hannover suffered their third defeat in the past five matches, which sees them drop to fifth.

Sampdoria made it back-to-back league wins after a 2-0 road win at Genoa on Saturday. Fabio Quagliarella stamped the final score in the 84th-minute, scoring his seventh goal of the season. Gaston Ramirez opened the scoring for the visitors in the 24th-minute, finishing off Duvan Zapata’s headed assist. Genoa was held to two shots on goal, eventually dropping their third result in a row. Sampdoria move to sixth with the win, while Genoa are two points from safety.

PSG rolled their way to three points on Saturday, defeating Angers 5-0 at the Stade Jean-Bouin. Edinson Cavani and Kylian Mbappe each netted twice for Unai Emery’s side, while Julian Draxler also got on the scoresheet. Mbappe’s right-footed finish in the fifth-minute made it 1-0 before Draxler doubled the advantage in the 14th-minute. Cavani got on the end of Mbappe’s assist in the 30th-minute to extend the PSG lead to 3-0. Draxler played distributor on PSG’s fourth goal, sending Cavani with a through-ball which the Uruguayan finished calmly. Mbappe netted his second in the 84th-minute, finishing Lucas’ assist on a fast break. Angers dropped to 14th with the loss, their second in their past three matches.

Troyes ended a three-match winless run on Saturday, cruising past Strasbourg 3-0 at home. Suk Hyun-Jun opened the scoring for the hosts in the 48th-minute as he headed home Charles Traore’s assist. Saif-Eddine Khaoui doubled the lead for Troyes just seven minutes later as he rifled home his third goal of the season. Adama Niane’s close-range finish in stoppage time capped off the perfect day for Troyes as they ran out 3-0 winners. Troyes jump to 11th with the three points, while Strasbourg sit in 18th.