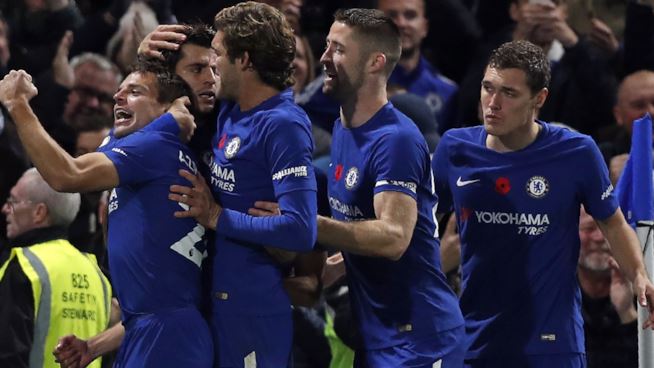 Chelsea extended their current home unbeaten run against Manchester United to eight matches, defeating the Red Devils 1-0 on Sunday at Stamford Bridge. Antonio Conte’s side used a header from Alvaro Morata to claim all three points at home. The Spaniard headed home Cesar Azpilicueta’s assist to the top right corner following a scoreless first half. It was Morata’s seventh league goal of the season. Manchester United was held to two shots on goal, while David de Gea made seven saves in the loss. Chelsea moved to one point of United in the league standings, while United remain eight points off of leaders Manchester City.

Elsewhere on Sunday, Manchester City downed Arsenal at the Etihad, while Real Madrid blanked Las Palmas in Spain. Hoffenheim used a trio of goals to defeat Koln on the road, while Wolfsburg drew with Hertha Berlin. Lyon and Marseille had lopsided victories in Ligue 1 action, while AS Roma defeated Fiorentina in Italy.

Here’s a closer look at all of the day’s European action:

Manchester City remained unbeaten across all competitions, downing Arsenal 3-1 at the Etihad Stadium. Kevin De Bruyne’s opener in the 19th-minute gave the Citizens a 1-0 lead going into halftime. Sergio Aguero doubled the lead in the 50th-minute from the penalty spot after Raheem Sterling was bundled over by Nacho Monreal. Alexandre Lacazette’s sixth goal of the season pulled Arsenal to within one after the hour mark, before City closed out the game. Gabriel Jesus finished from close-range for his ninth goal across all competitions. City remains first in the league table, while the Gunners drop to sixth.

Real Madrid snapped a two-match losing run, defeating Las Palmas 3-0 at the Santiago Bernabeu. Casemiro headed in Madrid’s opener in the 41st-minute for a 1-0 lead. Marco Asensio’s third goal of the season extended the hosts lead to 2-0 in the 56th-minute. Isco slotted home Cristiano Ronaldo’s assist for the final nail in the coffin after 74 minutes. Palmas was held to one shot on goal, losing their seventh consecutive league match. Zinedine Zidane’s men remain eight points back of league leaders Barcelona.

Villarreal capped off a perfect week, downing Malaga 2-0 at El Madrigal on Sunday. Nicola Sansone scored a brace for the hosts, who moved to fifth place with the win. After a scoreless first half, Sansone headed in the opener from close-range in the 68th-minute. The Italian doubled the lead for Villarreal in the 76th-minute with a right-footed effort. It was Sansone’s fourth goal of the season. Malaga dropped into last place after losing their ninth league match of the season.

Hoffenheim moved into fifth place following their 3-0 road win at Koln on Sunday. Dennis Geiger played the hero for Julian Nagelsmann’s side, but Sandro Wagner also added a brace in the win. Geiger opened the scoring in the ninth-minute from a close-range left-footed finish. Wagner doubled Hoffenheim’s lead from the penalty spot in the 56th-minute after Mark Uth drew a foul inside of the box. Wagner doubled his tally from a difficult angle finish in the 80th-minute, giving him four league goals this season. Koln remains winless in league play this season, while Hoffenheim snapped a four-match winless run in the league.

Hertha Berlin fought back for a share of the points in a 3-3 draw at Wolfsburg. Davie Selke played the hero, equalizing for Pal Dardai’s side in the 83rd-minute. Vedad Ibisevic opened the scoring for Hertha after a minute, finishing strongly inside of the box. Mario Gomez struck the bar in the 20th-minute from the penalty spot, keeping the score at 1-0. Yunus Malli headed Wolfsburg level in the 40th-minute, before Gomez netted the hosts in front four minutes later. Karim Rekik drew Hertha level in the 53rd-minute, heading home from a set-piece situation. Divock Origi looked to have given Wolfsburg the lead for good in the 60th-minute, but Selke had other ideas scoring his first league goal of the season. Hertha stay in 11th, while Wolfsburg are in 14th.

In the top Serie A match of the weekend, Inter Milan shared the points with Torino in a 1-1 draw. Eder snatched Inter a point, after equalizing in the 79th-minute. The Italian netted his first goal of the season, after finishing off Mauro Icardi’s assist. Iago Falque had given Torino a 1-0 lead prior to the hour mark, striking home from long-range. It was the Spaniard’s fifth league goal of the season. Inter drops to third place, while Torino are in eighth.

AS Roma claimed three points on Sunday, pulling away from Fiorentina in a 4-2 road win. The sides went into the halftime break deadlocked at 2-2 after Fiorentina pegged Roma back twice. Gerson’s opener in the fifth-minute gave Roma a 1-0 lead before Jordan Veretout leveled the score four minutes later. The Brazilian scored his second of the day in the 30th-minute from a left-footed finish. Giovanni Simeone’s header in the 39th-minute drew Fiorentina level going into the intermission. Kostas Manolas headed Roma back in front for good following a corner kick. Diego Perotti slammed the door shut on Fiorentina in the final minutes, scoring his second goal of the season.

Lazio – Udinese (postponed due to rain)

Lyon extended their current winning streak to six matches across all competitions, defeating St. Etienne 5-0. Memphis Depay and Nabil Fekir each scored in the opening half, which had the visitors up 2-0 at halftime. Leo Lacroix was sent off the St. Etienne early in the second-half for a bad foul on Fekir. Mariano added to the lead in the 58th-minute from close-range, making it 3-0. Bertrand Traore scored his fifth goal of the season in all competitions, scoring from a Lyon fast break. Fekir’s left-footed finish in the 85th-minute capped the final score at 5-0 to the visitors. St. Etienne stays in sixth with the loss, while Lyon sits seven points from the top spot.

Nice used a game-winning goal from Mario Balotelli to down Dijon 1-0 at home. Balotelli slotted home his sixth league goal of the season, scoring from the penalty spot in the 40th-minute. Alassane Plea drew the foul for Nice, allowing the Italian to slot home what proved to be the winner. Balotelli had an early shower however, receiving a straight red card in the 89th-minute for a vicious foul on Cedric Yambere. Nice jumps to 15th with the win, while Dijon drops to 16th.