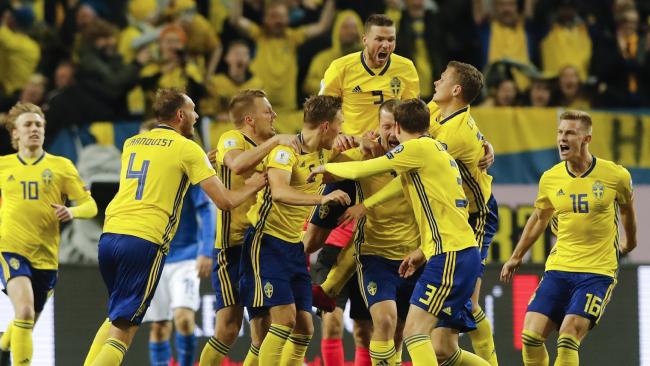 The first legs of UEFA’s World Cup Qualifying playoff round concluded on Saturday with several countries earning an advantage in the two-legged matchup. Sweden took a huge first step towards qualification after a 1-0 home win over Italy on Friday. Jakob Johansson’s right-footed effort in the 61st-minute proved to the be the winning goal. The midfielder’s effort deflected off of the Italian defense and sent Gianluigi Buffon the wrong way. Italy could only muster one shot on goal, despite holding a two-to-one advantage in possession. This was the first meeting between the two sides since June 2016 at the European Championship. Sweden now looks to complete the shock, facing Italy in Milan on Monday.

Elsewhere in qualification, Croatia cruised their way past Greece on Thursday, while Switzerland snatched a win in Belfast. Denmark hosted the Republic of Ireland on Saturday as well.

Here’s a closer look at all of the first legs:

Croatia took a massive first step to qualification for Russia 2018, after a 4-1 home thumping of Greece. The hosts used a trio of goals in the first half to hold an early lead over their opponents. Luke Modric’s penalty kick in the 13th-minute opened the scoring after Nikola Kalinic was brought down by Orestis Karnezis. The AC Milan striker doubled Croatia’s lead six minutes later after finishing from close range. Sokratis pulled one back for Greece in the 30th-minute after heading home from a corner kick. Ivan Perisic extended the Croatians lead to 3-1 in the 33rd-minute after heading home from close range. Andrej Kramaric’s close-range finish in the 49th-minute stamped the final score at 4-1 for the hosts. Greece returns home for the second leg on Sunday.

Switzerland used a penalty kick before the hour mark to down Northern Ireland 1-0 at Windsor Park. Ricardo Rodriguez’s penalty kick after 58 minutes was all the visitors needed to claim the win. Northern Ireland midfielder Corry Evans was whistled for handball, which allowed the visitors the penalty kick. The hosts were on the back foot for most of the match, failing to record a single shot on goal. Switzerland now returns home holding a slim advantage for the second leg.

Both Denmark and the Republic of Ireland will look for better performances in their second leg following a scoreless draw in Copenhagen on Saturday. Ireland keeper Darren Randolph was huge making five saves in the clean sheet. Both sides had chances to win the match late, with Shane Duffy and Yussuf Poulsen seeing headers saved. The second leg will take place in Dublin on Tuesday.

Here is a schedule for the second legs: