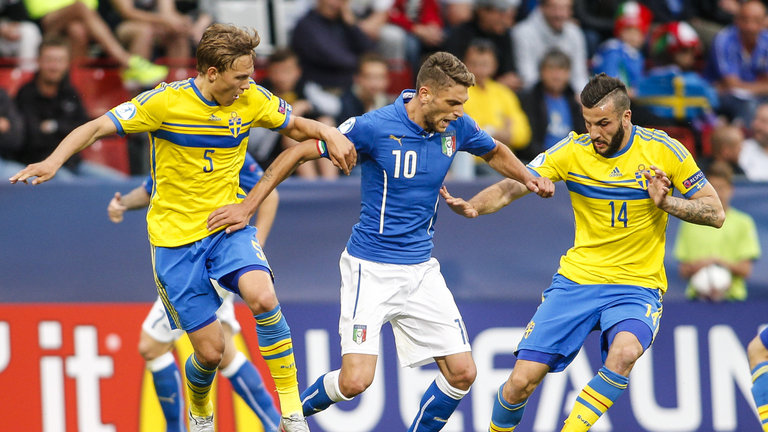 The 2018 FIFA World Cup may be eight months away, but the qualification process continues starting with the UEFA World Cup Qualifying playoff round.

Eight teams will play over two legs, with four of those eight stamping their place at next year’s World Cup in Russia. The top showdown kicks off on Friday from Stockholm as Sweden hosts Italy. The hosts finished second in Group A behind eventual winners France. 31-year-old Marcus Berg leads the Swedes  with eight goals in qualifying, and will be an important piece if they want to advance. Italy also were runners-up in their group, finishing five points behind eventual winners Spain. A strong defense will be key for the Italians, who allowed eight goals in ten qualifying matches so far. This fixture can be seen on Fox Sports 1 on Friday at 2:45 p.m. EST.

Elsewhere in qualifying, Greece travels to Croatia on Thursday while Northern Ireland hosts Switzerland. On Saturday the Republic of Ireland faces Denmark in Copenhagen.

Here’s a closer look at all of this week’s UEFA WCQ playoff first legs:

The first of our four matchups takes place from Belfast as a pair of underrated sides duke it out. Northern Ireland finished behind heavyweights Germany in Group C, posting a 6-3-1 record overall. Despite a pair of defeats to end qualifying, Northern Ireland will look for a strong opening performance at home. Strikers Kyle Lafferty and Josh Magennis each netted three goals so far. Northern Ireland is seeking their first World Cup appearance since 1986. Switzerland was one result from clinching the top spot in Group B, falling to Portugal 2-0 on Matchday #10. They have a trio of attacking playmakers that they can turn to for goals in the form of Xherdan Shaqiri, Blerim Dzemaili, and Haris Seferovic. The Swiss have made the last three World Cups, and will look to make 2018 a fourth.

Two defensive sides will square off also on Thursday as Croatia welcomes Greece to Zagreb. Croatia finished with 20 points in qualifying, falling two points behind leaders Iceland. Domagoj Vida leads a defensive backline that allowed only four goals in 10 qualifying matches. Offensively, Croatia will turn to experienced forward Mario Mandzukic who found the back of the net five times in qualifying. A pair of victories in their final two qualifiers saw Greece finish second in Group H behind juggernauts Belgium. Vassilas Torosidis (three goals) leads a defensive backline, that only allowed six goals through 10 qualifiers. Marseille striker Konstantinos Mitroglou is a huge offensive threat for Greece, scoring six goals and adding two assists in qualifying. Greece had its best ever finish in the 2014 World Cup, making the Round of 16.

Saturday sees the conclusion of the first legs as the Republic of Ireland faces Denmark at Parken Stadion. Denmark were unbeaten in their final seven qualifiers, despite finishing second behind Poland. Tottenham midfielder Christian Eriksen led the Danes with eight goals in qualifying, while Thomas Delaney had four. The Republic of Ireland used wins in their last two qualifiers to seal a second-place finish in Group D. Martin O’Neill’s men will look to book their fourth appearance in the competition, and their first since 2002. West Brom midfielder James McClean (four goals) and Nottingham Forest striker Daryl Murphy (three goals) are two players to watch for Ireland.