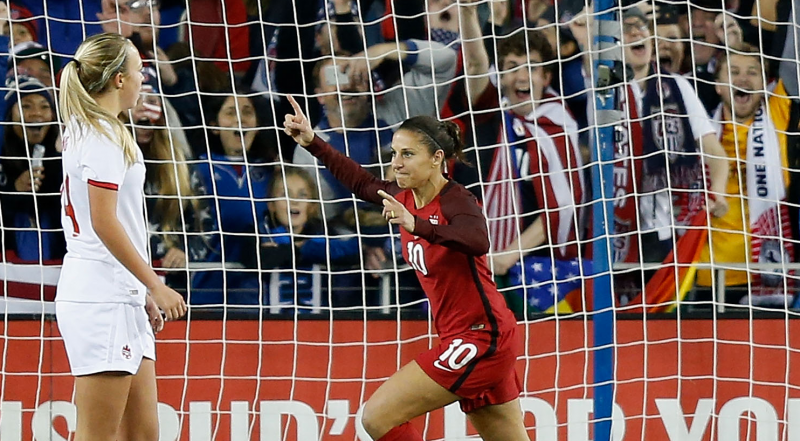 The U.S. Women’s National Team ended 2017 on a high, collecting a 3-1 victory in its final match of the year, against rivals Canada on Sunday at Avaya Stadium.

Julie Ertz opened the scoring just 11 minutes into the match. As has been the case for all of her 14 international goals, she scored from a set piece, easily heading in Megan Rapinoe’s corner at the near post.

Canada came out quickly in the second half, grabbing their goal five minutes after the break. A classic counterattack was responsible for the Canadians’ goal, which Janine Beckie scored.

The home side responded well, though, scoring another to go ahead, courtesy of Alex Morgan. The 56th-minute strike came as Christen Press won the ball close to the penalty area, and found Morgan running towards goal. From close range, the forward finished for her 80th international goal.

The deal was sealed in the 80th minute, with substitute Carli Lloyd scoring her first international goal since April. Rapinoe sent a cross into the box, which found Morgan’s head. The header got enough power on it to find Lloyd in front of goal, and the team’s co-captain finished off the game.

Sunday night’s victory proved to be a strong response to Thursday’s draw at BC Place, in which Canada was frequently on the front foot. Though it was not perfect for the U.S. team, they managed to dominate the match, particularly in the opening 25 minutes, when Ertz scored her goal.

The USWNT continues on its unbeaten streak against Canada, which has not beaten the Americans in more than 30 tries. The reigning world champions end the year with their 12th victory in 16 matches, remaining unbeaten in their last eight.