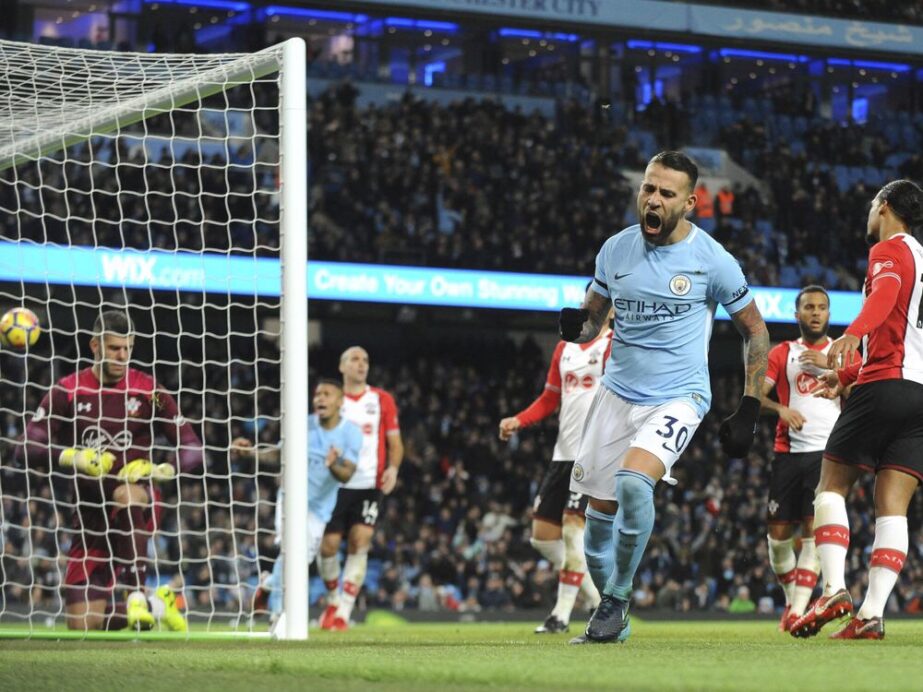 Manchester City used a 96th-minute winner from Raheem Sterling to down Southampton 2-1 at the Etihad. Oriel Romeu’s smooth finish in the 75th-minute leveled the score for Saints who missed several good chances early. Kevin De Bruyne’s opener came in the 47th-minute as the Belgian’s cross beat Fraser Forster to the bottom-left corner. Sterling’s curled effort beat Forster to the top right corner which kept the Citizens strong form going. Forster made 10 saves in the draw, but ultimately Southampton fell for the third time in November.

Elsewhere, Chelsea hosted Swansea City at home, while West Ham traveled to Everton. Lille shocked Lyon with a huge road win in Ligue 1, while PSG hosted Troyes. Coppa Italia and Copa Del Rey action continued with some of the heavyweights continuing their push in their respective tournaments.

Here’s a closer look at all of Wednesday’s European action.

Everton cruised their way to three points on Wednesday, downing West Ham United 4-0. Toffees forward Wayne Rooney sparked the performance with a hat trick. Rooney’s opener came in the 18th-minute as the forward headed in a rebound after Joe Hart saved his prior penalty kick. Rooney extended the lead in the 28th-minute giving the hosts a 2-0 halftime lead. Jordan Pickford kept the hosts ahead after saving Manuel Lanzini’s penalty kick before the hour mark. Rooney’s hat trick goal came on a beautiful strike from long range after the hour mark. Ashley Williams headed in his first league goal of the season, and the fourth for Everton late in the match. Wednesday’s win was Everton’s second straight at home in league play. West Ham have now lost three of their last four matches.

Here’s all of Wednesday’s EPL results:

A second-half surge by Lleida Esportiu helped the visitors oust Real Sociedad 3-2 away from home. First half goals from Diego Llorente and Juanmi had the hosts comfortably ahead, but could not hold off their opponents. Aitor Nunez’s right-footed shot started the comeback for Esportiu after 56 minutes. Manuel Molina’s penalty kick added to the comeback three minutes later before Bojan Radulovic capped off the feat in the 87th-minute. The Serbian headed home his first goal in the competition, and sent the La Liga side packing from the tournament.

Sassuolo bounced back from a weekend loss in Serie A play, but ousting Bari 2-1 in Coppa Italia action. A 93rd-minute winner from Matteo Politano proved to be the difference for the hosts who saw their lead canceled out after the hour mark. Diego Falcinelli’s left-footed effort in the 34th-minute was the opener for Sassuolo, until Nene equalized from the penalty spot. Politano blasted home from long-range for his third goal of the season in all competitions.

Lille pulled the shock of the day in Ligue 1 action, defeating Lyon 2-1 away from home. Thiago Mendes opened the scoring after 21 minutes for his third goal of the season. Mariano drew Lyon level in the 36th-minute, heading Tanguy NDombele’s cross to the bottom right corner. Ezequiel Ponce’s header after 40 minutes put Lille back in front for good, despite missed opportunities by the hosts. Nabil Fekir’s penalty kick in the 56th-minute was saved by Lille keeper Mike Maignan. Lille move to 18th in the standings, while Lyon drop to third.

Monaco dropped their third straight across all competitions, losing 1-0 at Nantes. The hosts had the majority of the chances toward goal, including a late winner in front of their supporters. Lucas Lima’s long-range strike in the 92nd-minute proved to be the winner, and gave the 26-year-old his first goal of the campaign. Monaco was held to one shot on goal, dropping to fourth with the loss.

Here’s all of Wednesday’s Ligue 1 results: