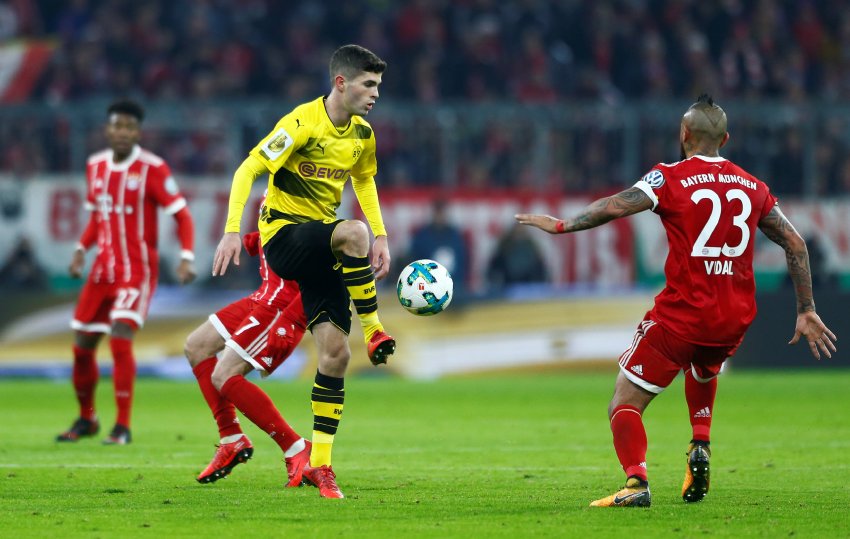 Christian Pulisic was dangerous throughout Wednesday’s clash with Bayern Munich, but it wasn’t enough for Borussia Dortmund to overcome Germany’s top team.

A pair of first half goals lifted Bayern to a 2-1 win over Dortmund in Wednesday’s DFB-Pokal third round match. Pulisic was active throughout, generally playing atop the field as Dortmund hoped for counterattacking chances. His best moment came on a well-placed cross that was scuffed by winger Andriy Yarmolenko.

Elsewhere in Germany, Aron Johannsson made a rare appearance for Werder Bremen, coming off the bench as a substitute in a 3-2 win over Freiburg. Caleb Stanko went a full 90 in the same match in what ended as a losing effort.

In England, Emerson Hyndman watched from the bench as Bournemouth saw a potential upset of Chelsea thwarted by an Alvaro Morata stoppage time winner.

Fabian Johnson did not dress in Borussia Monchengladbach’s 1-0 loss to Bayer Leverkusen on Wednesday.

Aron Johannsson came on as an 83rd minute substitute in Werder Bremen’s 3-2 win over Freiburg on Wednesday.

Caleb Stanko started and played 90 minutes for Freiburg on Wednesday.

Timmy Chandler did not dress in Eintracht Frankfurt’s 2-1 win over Heidenheim on Wednesday.

Emerson Hyndman dressed but did not play in Bournemouth’s 2-1 loss to Chelsea on Wednesday.

Ethan Horvath did not dress in Club Brugge’s 3-0 win over KV Mechelen on Wednesday.