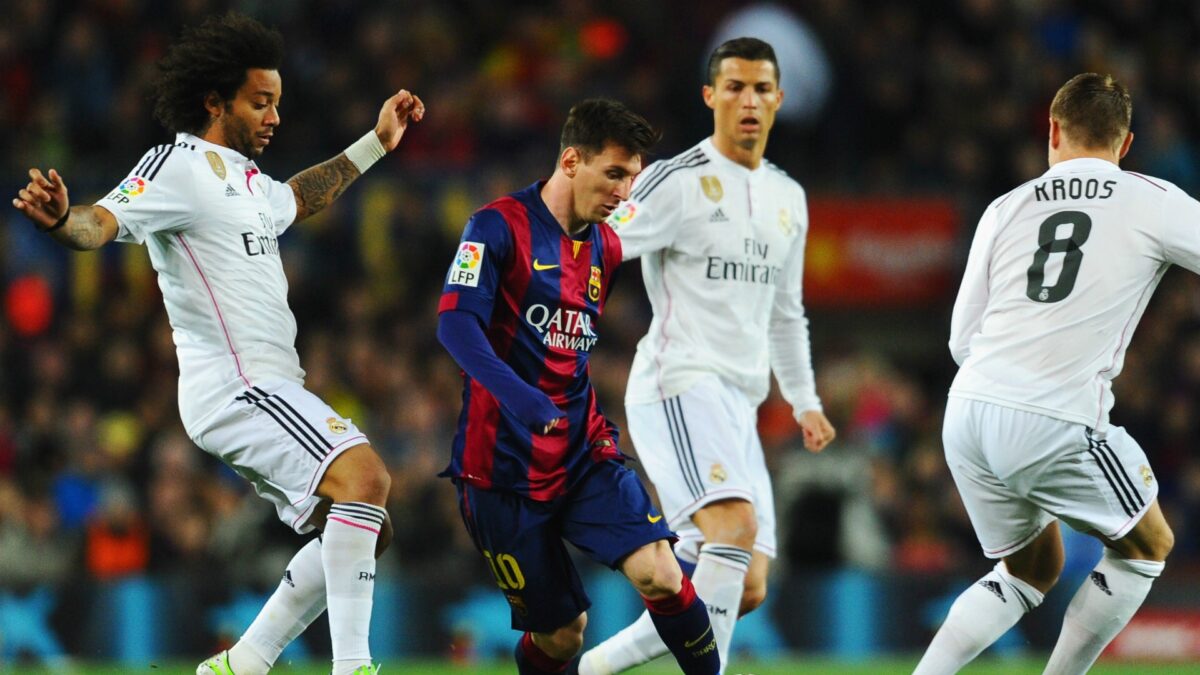 Christmas may be a few days away, but the best gift for soccer fans will take place at the Santiago Bernabeu on Saturday. El Clasico takes centerstage this weekend as Real Madrid welcomes league leaders Barcelona to town. Zinedine Zidane’s men are coming off a FIFA Club World Cup final win last weekend, which saw them miss out on league play. Los Blancos are 11 points behind the Catalan side and know they will need three points to end the year on a positive note. Cristiano Ronaldo is finding his form, with 13 goals in La Liga and the Champions League this season. Barcelona are unbeaten in league play this season, posting 13 wins and three draws so far. Lionel Messi has 17 goals in all competitions this season, and will look to outdo his opposing star in another big-time match.

Elsewhere, Arsenal hosts Liverpool in a battle of fourth vs. fifth, while Manchester United travel to Leicester. Juventus welcomes AS Roma to Turin on Saturday, while Napoli plays hosts to Sampdoria. Atletico Madrid faces a tricky test at Espanyol on Friday.

The busy EPL schedule continues this weekend with a top-five clash slated at the Emirates. Arsenal welcomes Liverpool to town on Friday, looking to continue their rise up the league table. Following a 3-1 home loss earlier this month to Manchester United, the Gunners are unbeaten in their last four matches. Arsene Wenger’s men will also try to snap a three-match losing streak against the Reds. Liverpool are unbeaten in the month of December, winning two of their four league matches. Jurgen Klopp’s men have played some fantastic free-flowing soccer so far and will look for another win in London. Leading the way for Liverpool is Egyptian international Mo Salah who has 13 goals in league play this season.

The final match of a nine-match slate on Saturday sees Manchester United travel to Leicester City. Jose Mourinho’s men are coming off an embarassing league cup defeat to second-tier Bristol City on Wednesday, and will look to show quick memory. United are winners of their last two league matches over Bournemouth and West Brom respectively. Romelu Lukaku will once again look to lead the line, and add to his nine league tallies this season. Leicester are coming off a penalty shootout defeat to Man City in the EFL Cup, and will look to bounce back from a dismal league loss last weekend as well. The Foxes will look towards playmaker Riyad Mahrez (five goals, four assists) to break down the Red Devils back-line.

Atletico Madrid look to remain in second place heading into the festive period, as they travel to Espanyol on Friday. Diego Simeone’s side are winners of their last four league matches, keeping clean sheets in three of those four. Antoine Griezmann leads the team with five goals so far this season. Espanyol drew 2-2 with Las Palmas their last time out, despite seeing their lead slip away. Gerard Moreno leads the team with seven goals this season.

Entertainment remains a premium this weekend as Juventus hosts Roma at home. The hosts lead their opponents by three points in the table, and will look to keep close distance with Napoli at the top. Juve have also not conceded a goal in their last seven matches, and will look to keep that trend going. Paulo Dybala and Gonzalo Higuain have combined for 21 league goals this season. Roma are coming off a midweek loss against Torino in the Coppa Italia and will look to bounce back. Bosnian international Edin Dzeko leads the team with eight goals.

League leaders Napoli look to extend their unbeaten run to four matches as they hosts Sampdoria. Belgian international Dries Mertens leads the team with 10 goals, and is a tricky player to keep quiet. Sampdoria have not tasted victory in their last four matches, and were eliminated from the Coppa Italia midweek. Former Juventus forward Fabio Quagliarella leads the team with nine goals, while Duvan Zapata has six. Napoli are winners of their last three meetings with Sampdoria.