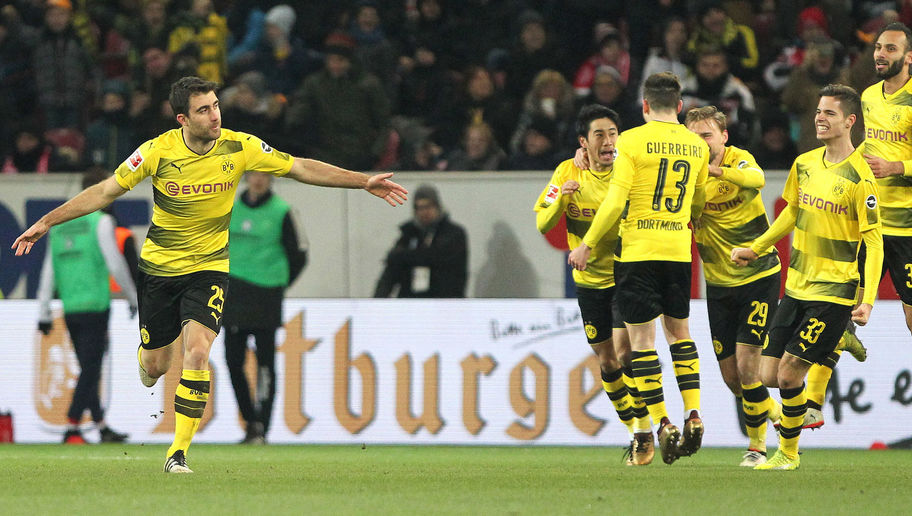 Borussia Dortmund had found it tough to do anything right the last few months, failing to win a league match since September 30th. The horrid run saw the firing of manager Peter Bosz, and the ousting of them from the UEFA Champions League. However, Dortmund finally halted their winless run on Tuesday defeating Mainz 2-0 away from home. A pair of second-half goals gave the visitors an important three points as well as confidence heading into some tough upcoming fixtures. Sokratis netted his third goal of the season, finishing smoothly in the 55th-minute following a set piece situation. Shinji Kagawa added the insurance for the winner with minutes remaining to double Dortmund’s advantage. Mainz was held to zero shots on goal, losing their third match out of their last four fixtures. Dortmund climbed to sixth with the win.

Elsewhere, Manchester City continued their domestic dominance in the EPL, while Manchester United held on for a win against Bournemouth. Bayern Munich claimed three points at home in Germany, while Fiorentina advanced in Coppa Italia play. Atalanta downed Genoa in the lone Serie A match of the week.

Here’s a closer look at all of Tuesday and Wednesday’s European action:

Manchester City set a new top-flight record on Wednesday, earning their 15th consecutive league win after defeating Swansea 4-0. Pep Guardiola’s men scored a pair of goals in each half to extend their lead to 11 points at the top of the league summit. Kevin De Bruyne’s whicked free kick in the 34th-minute doubled the Citizens lead after David Silva flicked home their opener. Silva netted his second goal of the match in the 52nd-minute to extend the lead to 3-0 before Sergio Aguero added his 12th goal of the season with minutes remaining. Swansea remains last in the league table suffering their 11th defeat of the season.

Manchester United bounced back from their derby loss last weekend by defeating Bournemouth 1-0 at Old Trafford. Romelu Lukaku’s header in the 25th-minute proved to be the difference for the Red Devils. The Belgian finished off Juan Mata’s cross for his eight league goal of the season. David de Gea was huge again for United making seven saves in the clean sheet victory. Bournemouth are winless in their last five matches and sit in 14th place. United are 11 points behind Manchester City and will look to keep their hopes of a league title alive.

Here’s all of Tuesday and Wednesday’s EPL results:

Bayern Munich made it four straight victories in all competitions, defeating Koln 1-0 at the Allianz Arena on Wednesday. Robert Lewandowski continued his strong campaign, netting his 20th goal of the season. The Polish international made up for some missed opportunities earlier in the match, finishing off Thomas Muller’s headed assist in the 60th-minute. Koln keeper Timo Horn kept the scoreline from getting even more lopsided, making seven saves in the match. Bayern’s lead remains at nine points in the table, while Koln are in last with three points.

Here’s all of Tuesday and Wednesday’s Bundesliga results:

Fiorentina stamped their place into the Coppa Italia quarterfinals, defeating fellow Serie A side Sampdoria 3-2 at home. A second-half brace from Jordan Veretout proved to be vital after the sides were deadlocked 1-1 at halftime. The Frenchman’s penalty kick goal in the 90th-minute sealed the deal for Fiorentina after Gaston Ramirez pegged them back with a penalty kick goal of his own. Khouma Babacar and Edgar Barreto also got their names on the scoresheet, scoring the first-half tallies. The win for the hosts extends their unbeaten run to five matches, while Sampdoria suffer their third defeat out of their last five matches.

Here’s all of Tuesday and Wednesday’s Coppa Italia results:

In a make-up after their match was postponed on Monday, Atalanta got the last laugh as they defeated Genoa 2-1 away from home. Andrea Masiello played the hero on Tuesday, scoring from a set piece situation which proved to be the winner. Masiello, 31, headed home Josip Ilicic’s assist in the 52nd-minute after the Slovenian leveled the score before halftime. Andrea Bertolacci’s opener gave Genoa some hope in the early moments of the match, but defensively they could not deal with the duo of Ilicic and Masiello. Atalanta jumps to eighth place while Genoa sit in 16th.