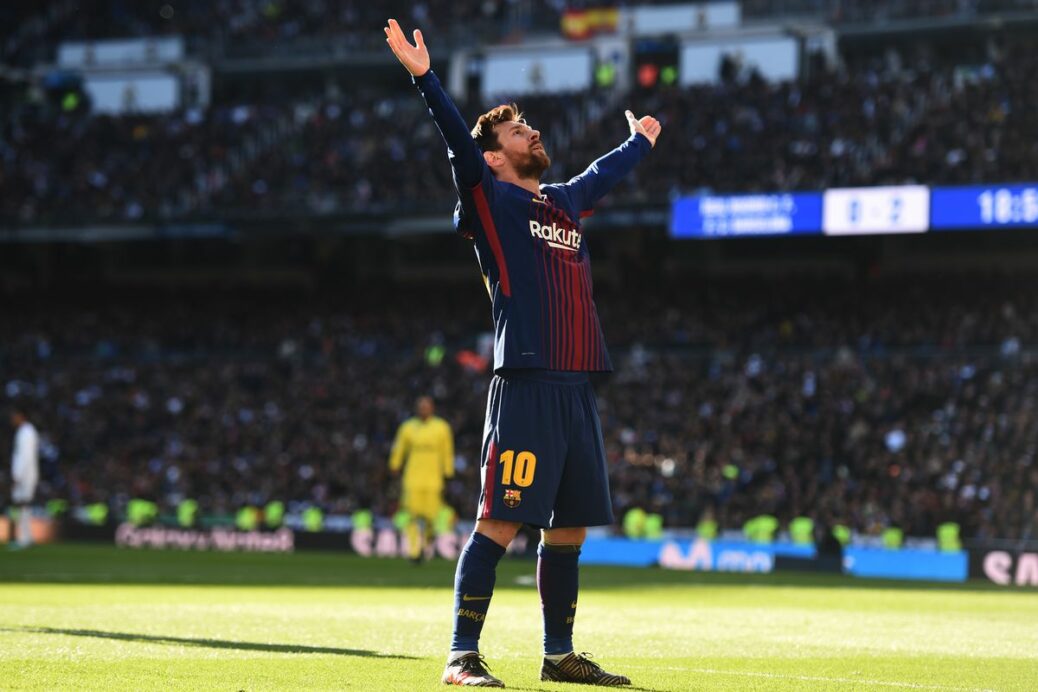 It may be a few days until Christmas, but Barcelona got the sweetest gift on Saturday defeating Real Madrid 3-0 away from home. A trio of second-half goals gave the league leaders another three points in their quest for the La Liga crown. Luis Suarez’s opener gave Barca a 1-0 lead after 54 minutes, following a scoreless first-half. Lionel Messi doubled the advantage for Barcelona in the 64th-minute, scoring from the penalty spot. Dani Carvajal saw straight red for a deliberate handball, which gave the visitors the spot kick. It was Messi’s 18th goal in all competitions this season, and his 15th in league play. Aleix Vidal finished off the triumph, scoring from a right-footed finish in stoppage time. Marc-Andre ter Stegen made five saves in the clean sheet, which now sees Ernesto Valverde’s side nine points clear at the top of the table. Real Madrid are 14 points back of their opponents, sitting in fourth place.

Elsewhere, Juventus welcomed Roma to Turin in the must-watch match in Italy. Arsenal drew at home with Liverpool in a six-goal thriller, while Tottenham Hotspur traveled to Burnley. Atletico Madrid suffered a shocking loss on the road at Espanyol.

The points were shared at the Emirates on Friday and Arsenal drew Liverpool, 3-3. Philippe Coutinho’s flicked header gave the Reds a 1-0 lead after 26 minutes. Mo Salah’s left-footed blast extended Liverpool’s lead to 2-0 after 52 minutes. However, Arsenal did not lie down as they leveled the score with a pair of goals in a four-minute span. Alexis Sanchez headed home their first goal before Granit Xhaka beat Simon Mignolet from long range. Mesut Ozil’s left footed finish gave the Gunners a 3-2 lead in the 58th-minute. Despite their comeback, Arsenal could not hang on as Roberto Firmino beat Petr Cech earning his side a point. Cech made six saves in the draw, which dropped Arsenal to sixth place. Liverpool sit in fourth.

Tottenham Hotspur used a hat trick from England international Harry Kane to down Burnley 3-0 at Turf Moor. Kane’s opener came after seven minutes as the forward finished from the penalty spot. The advantage was pushed to 2-0 in the 69th-minute as Kane slotted past Nick Pope on a breakaway. The 24-year-old’s perfect day was capped in the 79th-minute as his left-footed finish beat Pope to give him 15 league goals this season. Burnley was held to two shots on goal, losing their first home match since Nov. 26th. Tottenham move to fifth with the road win.

Atletico Madrid saw their 16-match unbeaten run snapped on Friday, losing 1-0 at Espanyol. Sergio Garcia played the hero, scoring the winning goal in the 88th-minute. It was the Spaniard’s first league goal of the season, as the forward finished from a right-footed effort. Atletico was held to one shot on goal, being frustrated for the entirety of the match. Espanyol move to 15th in the standings, while Atletico sit in second.

Villarreal made it back-to-back league wins, defeating Valencia 1-0 away from home. Carlos Bacca’s winning goal came in the 24th-minute as the Colombian made it five goals in league play this season. Valencia’s fight back took a hit as Simone Zaza saw a second yellow card at the hour mark. At the final whistle, Villarreal remained in sixth place with the win.

Juventus snatched another three points in Serie A, edging Roma 1-0 at home. Mehdi Benatia’s close-range finish in the 18th-minute proved to be the difference in the match. Alessandro Florenzi came close to pulling Roma level but struck the crossbar in the 80th-minute. Roma was held to two shots on goal, losing their second match of the week. Juve currently sit a point behind league leaders Napoli after the win.

Sassuolo pulled the shock of the weekend, edging Inter Milan 1-0 on Saturday. Diego Falcinelli’s 24th-minute header proved to be the difference, as the Italian got on the end of Matteo Politano’s cross. Inter was kept out four times by Sassuolo keeper Andrea Consigli, suffering their second defeat of the week. The hosts move up to 14th with the win, as Inter sit in third.