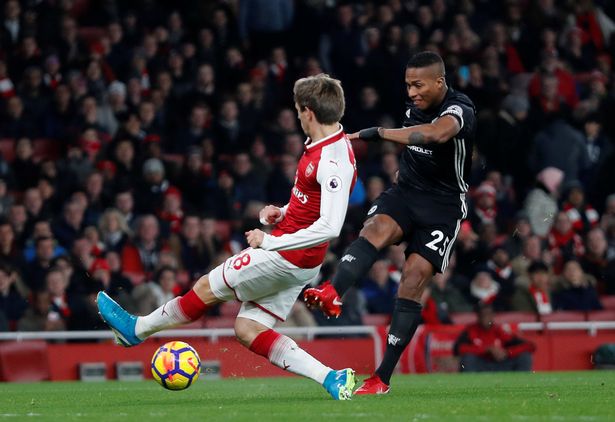 In preparation for next weekend’s Manchester Derby, Manchester United downed Arsenal, 3-1, at the Emirates on Saturday.

Jesse Lingard led the Red Devils with a brace while United moved to five points of their city rivals ahead of their match tomorrow. Antonio Valencia’s opener came in the fourth minute as the Ecuadorian slotted home Paul Pogba’s assist. Lingard doubled the advantage in the 11th-minute as his right-footed shot went off the left post and in. Alexandre Lacazette pulled Arsenal to within one early in the second-half to give the Frenchman eight league goals on the season. Lingard slammed the door on the match in the 63rd-minute as the England international again finished Pogba’s assist.

Pogba will miss the upcoming Manchester Derby after seeing a straight red card for a foul on Hector Bellerin. United remains in second place, while Arsenal sits in fifth.

Elsewhere in Europe, Paris St. Germain suffered their first loss of the season, while Chelsea downed Newcastle. Juventus got the better of Serie A leaders Napoli, while Torino tied Atalanta. Barcelona was held to a draw at home in La Liga action, while Bayern Munich cruised to a home victory.

Chelsea made it back-to-back league wins after a 3-1 home triumph over Newcastle United. The visitors sent Stamford Bridge into an early shock as Dwight Gayle slotted home for a 1-0 lead. Eden Hazard’s right-footed finish drew the Blues level in the 21st-minute before Alvaro Morata headed home Victor Moses cross for a 2-1 lead. Hazard capped the final score at 3-1 with a penalty kick goal in the 74th-minute. Antonio Conte’s men sit in third place with 32 points, while Newcastle drop to 14th.

The points were shared at the Camp Nou as Barcelona and Celta Vigo drew 2-2 on Saturday. Lionel Messi canceled out Iago Aspas’ opener in the first-half which saw the teams go into the halftime break deadlocked at 1-1. Luis Suarez finished off Jordi Alba’s assist in the 62nd-minute which looked to have given the hosts all three points. Maxi Gomez had other ideas, scoring his seventh league goal of the season which pulled Celta level at 2-2. Barca are five points clear of Valencia in the league table after the draw. Celta Vigo are in eight place with 18 points.

Atletico Madrid fought back from a one-goal first half deficit, to defeat Real Sociedad 2-1 at home. Antoine Griezmann’s winning goal in the 88th-minute completed the comeback for Diego Simeone’s side. Filipe Luis drew Atletico level in the 63rd-minute for his first goal of the season. Willian Jose’s penalty kick goal in the 29th-minute opened the scoring for the visitors, who unfortunately fell for the second time this week.

Bayern Munich bounced back from last weekend’s 2-1 road defeat at Gladbach, by downing Hannover 3-1 on Saturday. Arturo Vidal’s fourth goal of the season gave Bayern a 1-0 lead in the first-half. Charlison Benshcop headed the visitors level in the 35th-minute for his first goal of the season. Kingsley Coman gave Bayern the lead after the hour mark as his left-footed effort found the top left corner. Robert Lewandowski’s penalty kick goal in the 87th-minute added to the victory for the league leaders. Bayern are six points clear at the top of the summit, while Hannover are in 10th.

The points were shared at the BayArena as Bayer Leverkusen hosted Borussia Dortmund. Andriy Yarmolenko’s goal in the 73rd-minute canceled out a first-half opener from Kevin Volland. Volland’s left-footed goal on a fast break gave the German nine goals on the season. Despite being reduced to 10 men later in the half, Bayer held on for a point despite Yarmolenko’s third goal of the league campaign. Dortmund are in sixth place while Leverkusen are in eighth.

Juventus cut the deficit to one point behind Serie A leaders Napoli, following a 1-0 road win on Friday. Former Napoli forward Gonzalo Higuain scored the lone goal in the match, which came in the 12th-minute. The Argentine finished off Paulo Dybala’s assist for his 11th goal in all competitions. Gianluigi Buffon made six saves in the clean sheet, his third in a row. Napoli suffer their first league loss of the season but remain in the top spot.

Paris Saint-Germain suffered their first loss of the season, falling to Strasbourg 2-1 in Ligue 1 play. Unai Emery’s side conceded a goal in each half, despite drawing level before halftime. Kylian Mbappe’s close-range finish canceled out Joia Nuno Da Costa header which saw the sides deadlocked at 1-1 at halftime. Stephane Bahoken’s right-footed effort proved to be the winner for the newly promoted side. It was the 25-year-old’s second goal of the season, and it ended up being very costly in the final result. Despite 29 shots in total, PSG fall for the first time in all competitions this season. Strasbourg sit in 16th place with the win, while PSG are nine points clear in first place.