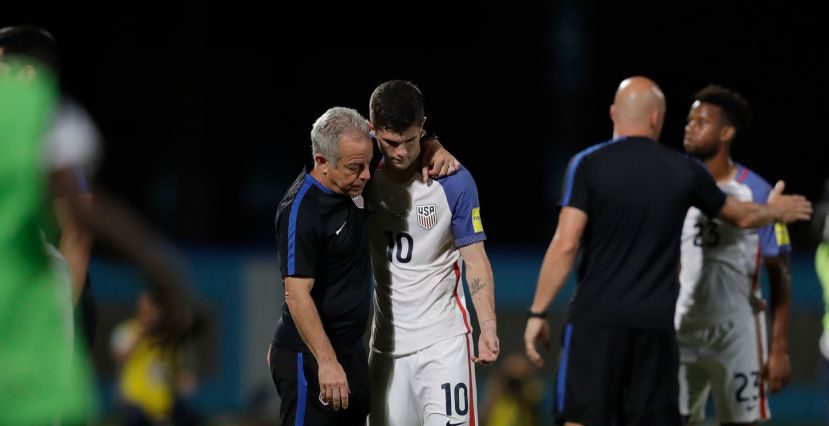 The 2017 calendar year was a roller coaster, to say the least. There were moments of hope scattered throughout a year headlined by one massive unmistakable drop.

From MLS history to World Cup misery, 2017 had a little bit of everything. We saw stars emerge and falter, teams thrive and collapse and storylines emerge that never seemed possible.

With that said, lets take a look at the top 10 storylines in American Soccer in 2017:

It’s hard to look ahead towards the 2026 World Cup for fans of American soccer. But the push to host the world’s biggest tournament was a major breakthrough in 2017.

While Sunil Gulati is set to step out of the role of U.S. Soccer president, he will continue to lead a push to host the 2026 World Cup across the U.S., Canada and Mexico. After missing out on hosting the 2022 tournament, the U.S. returns to the bidding process, where they will face off with Morocco for the right to host in 2026.

That process will be cleared up in 2018, but the groundwork for a potential 2026 event was laid throughout a busy 2017.

It was an off-year for the U.S. Women’s National Team. With no World Cup or Olympic tournament to contend, 2017 was about ushering in change.

It came, though it wasn’t always easy. There were two early losses in the SheBelieves Cup that signaled a rough patch, but, by and large, the USWNT emerged from that rough patch with a more refined group.

Younger options like Rose Lavelle, Lynn Williams and Andi Sullivan stepped in. Julie Ertz thrived as a defensive midfielder. Veterans Alex Morgan and Carli Lloyd continued to plug away. World Cup qualifying is around the corner, and the USWNT looks to be ready to push towards 2019.

While the U.S. Men’s National Team floundered, a series of young players were stepping up abroad.

Weston McKennie is likely the big headliner as the young midfielder rapidly became a vital part of the Schalke midfield setup. The same can be said for Jonathan Gonzalez, who led Monterrey to a Copa MX trophy. Matt Miazga, meanwhile, continued to build on a strong campaign with Vitesse while building his case for senior minutes.

Up-and-comers like Shaq Moore, Jonathan Klinsmann and Ethan Horvath got first team experience while Julian Green appears to have settled at a legitimate level while on loan with Greuther Furth. With the national team in flux, expect this group of youngsters to lead the future while building on a strong 2017 season for young stars.

The U.S. Under-20 Men’s National Team made quite an impression at this summer’s U-20 World Cup. After topping their group, the U.S. thumped New Zealand, 6-0, to begin the knockout stage. A loss to eventual runners-up Venezuela soon followed, but players like Tyler Adams, Cameron Carter-Vickers and Jonathan Klinsmann used that tournament as a springboard for bigger things in the second half of the year.

Another member of that team, Josh Sargent, was a key contributor for the U-17s after playing up an age group with the U-20s. At the U-17 World Cup, the U.S. also reached the quarterfinal by playing some free-flowing attacking soccer behind Sargent, Andrew Carleton and Timothy Weah. After thumping Paraguay, 5-0, in the round of 16 the U-17s fell to eventual champions England.

It was a memorable year for the youth teams as several players emerged as potential USMNT contributors heading into 2018.

The MLS Expansion wheel turned and turned in 2017. We know one of its landing spots with one more set for 2018.

Nashville will join MLS in this round of expansion, bringing an added presence to the southeast. It was a meteoric rise for the Tennessee city, who rose through the expansion pool thanks to a solid stadium plan and a wealthy group of owners.

Meanwhile, Cincinnati, Detroit and Sacramento remain involved in the chase. One will earn their spot early in 2018 while the others will remain in contention as spots 27 and 28 become the focal point.

Atlanta United entered MLS and immediately changed the game. The club didn’t ease its way into anything heading into its first season, earning a playoff appearance along the way.

But it wasn’t what they did so much as how they did it. Atlanta United broke the mold, paying big transfer fees to bring in young South American stars. Miguel Almiron thrived. Josef Martinez banged in goals. Tito Villalba, Leandro Gonzalez Pirez and Yamil Asad all stood out.

It remains to be seen how Atlanta takes the next step and if they can hold on to the stars mentioned above for the long haul. But, in 2017, the club set a tone that should inspire plenty of copycats over the next few years.

The Columbus Crew are an MLS original that has generally been a competitive team on the field. However, the revealed plan to relocate them, and the movement that followed, became the team’s big storyline of 2017.

While the team was making a playoff push on the field, plans from owner Anthony Precourt emerged. A potential relocation to Austin loomed large, drawing protests from fans in Columbus and throughout the American soccer landscape.

There’s still plenty of wrangling to be done and lots of pieces to move, making the #SaveTheCrew movement a story for 2018 as well.

From the moment they lost MLS Cup 2016, TFC set a goal. They achieved it in remarkable fashion.

TFC emerged as arguably the best MLS team ever, dominating the league en route to a Supporters Shield, Canadian Championship and, ultimately, an MLS Cup. They also set a record for points in a regular season while amassing a whopping +37 goal differential.

With stars like Michael Bradley, Jozy Altidore, Victor Vazquez, and Sebastian Giovinco leading the way, TFC emerged as the league’s premier club, one that could be set to contend for quite some time.

Heading into 2017, it was quite clear that Christian Pulisic was pretty, pretty good. In 2017, though, he became a legitimate star.

With the national team, Pulisic recorded six goals and four assists in nine matches while being involved in some way in 13 of the 17 goals goals scored this calendar year. His efforts earned him recognition as 2017 U.S. Soccer Male Player of the Year, an obvious choice.

On the club level, Pulisic thrived with Borussia Dortmund, becoming one of the team’s vital players. The 19-year-old helped the club win a German Cup trophy and has scored four goals thus far this season.

October 10, 2017 is a day that will remain etched in the memories of everyone involved with American soccer. It was a doomsday scenario, one that will have ramifications long beyond the squandered 2018 World Cup.

There was little doubt that the USMNT’s World Cup failure was the top story of 2017, a year that will always have a black spot on it because of that misstep. It began long before the final whistle in Trinidad & Tobago, though. The 2016 losses hurt, but dropped points against Honduras, Costa Rica and Panama all set the stage for an epic collapse.

Because of that, change is coming. 2018 will bring a new U.S. Soccer president, a new USMNT manager and a new-look squad filled with young players. There’s a future ahead, but it remains to be seen how the American soccer system rebuilds itself after its biggest ever failure.