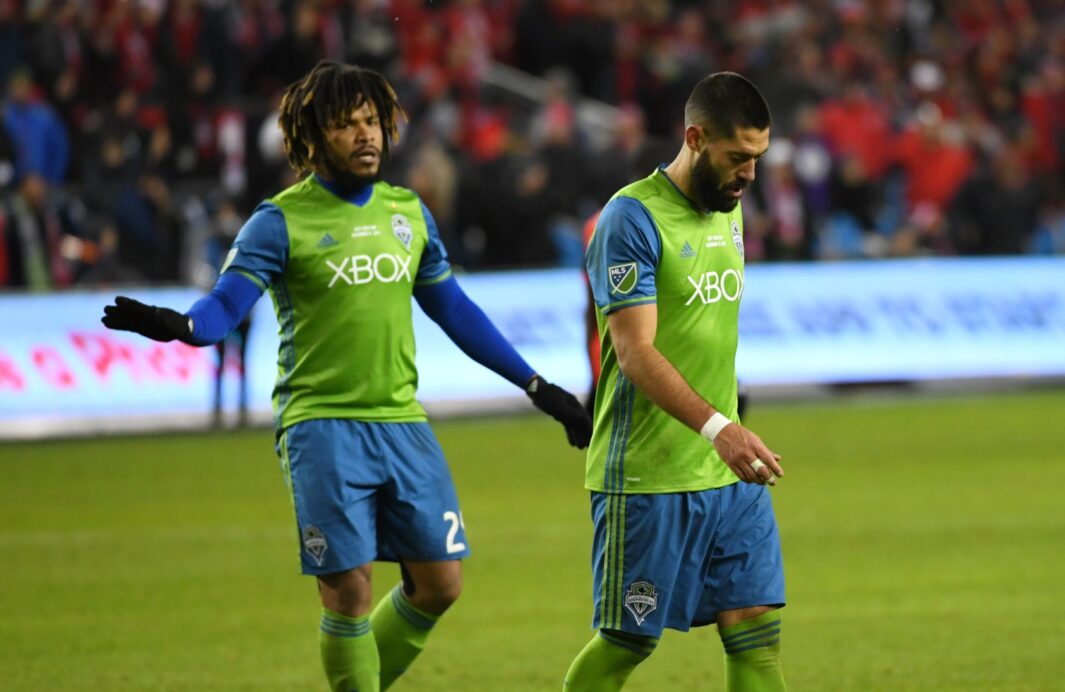 TORONTO– You couldn’t help but notice the similarities between the 2016 and 2017 MLS Cups in the first half of Saturday’s contest at BMO Field.

However, what followed was the continuation of an onslaught that never stopped, and eventually broke down the brick wall that Stefan Frei erected in front of the Seattle goal for 66 minutes.

After absorbing pressure in the first half like last season’s final, the Sounders expected a response, but it never came.

Seattle’s failure to pack a punch against Toronto’s dominance eventually cost them the opportunity to hoist the trophy for the second consecutive year.

“I thought once we were able to get to halftime and make some adjustments, I thought we would give ourselves a chance,” Sounders head coach Brian Schmetzer said. “The adjustments we made at halftime didn’t work and at some point if you’re going to rely on your goalkeeeper that often and in so many critical moments, one of them is going to get through. Credit to Jozy and the assist by Giovinco is a good pass and they finally broke through.”

All Schmetzer had to do was point out the specifics on the final stat sheet to prove just how much went wrong for the Sounders, and how Toronto thoroughly dominated the championship match.

“Throughout the course of the year, I’ve always picked out one stat on the stat sheet that I feel is very important for success and that’s duels won,” Schmetzer said. “They had 33 duels won and we had 10. Normally our team is very good in that department. We’ve been very good about that all year long so what would I say there is they came out in the first half very fired up, we knew they would be, we would get through halftime and think we’d get a little break or reprieve, but they came out in the second half again and won more duels.

“Second part of that equation is we put our best attacking lineup out there, but we weren’t able to keep the ball in any part of the game,” Schmetzer said. “I think some of the patience in the second half when we did get the ball up the field wasn’t great. That was not one of our stellar performances, but what I told them in the locker room is the effort was there, but unfortunately today the soccer was not our best soccer.”

One of the main reasons the Sounders attack couldn’t get anything going in their final third was the play of Michael Bradley, who terrorized the area in front of the Toronto back four.

“I think Michael Bradley had a great game today,” Sounders forward Jordan Morris said. “He was all over the place, breaking up plays. Credit to him, he’s a great player. You see his work rate and his mentality, and that’s what you need in a game like this, honestly, is that kind of mentality to just go out and outwork the other team.”

Behind Bradley, the Toronto back four, a setup that was rarely utilized over the course of the season, dominated Seattle. But the formation switch wasn’t foreign to the Sounders, who knew it was a possibility after the Reds altered their setup in the Eastern Conference Final against Columbus.

The problem for the Sounders is that they couldn’t do a lick against an organized defensive setup.

”Toronto’s lineup didn’t phase us because they played that in the second half in Columbus,” Schmetzer said. “When we got the lineup, we knew they were going to go the way they created against Columbus.”

“They did a really good job. They were really organized,” Sounders forward Will Bruin said. “Trying to jam the ball into me in the middle kind of plays to their strengths, because they just collapse. You’ve gotta get rid of it quick, and, fine — if you can get rid of quick and connect the next pass to get out the other side, then they open up. But tonight we just couldn’t connect our passes.”

Despite all of the failure on Saturday night, the Sounders were able to reflect a bit on the success of their season just to get back to MLS Cup.

“There’s a lot of positives,” Schmetzer said. “We had the longest unbeaten streak and Stef’s 13 shutouts were a Sounders record. I believe there was a lot of statistical accomplishments. I think the ability of that team to overcome a slow start and get here to MLS Cup, if you look at MLS Cup as a whole the 2015 finalists didn’t make the playoffs. It’s no disrespect to their franchises, Portland and Columbus, I mean that it’s very difficult to repeat and to come back to MLS Cup twice in a row. I’m obviously very proud of that fact.”

Just like Toronto in 2016, the Sounders are prepared to use their MLS Cup loss as motivation to get back to a third championship in a row, and do so as the host.

“It’s a tough pill to swallow,” Morris said. “But we gotta look forward to next year and the opportunity we have to get some revenge.”