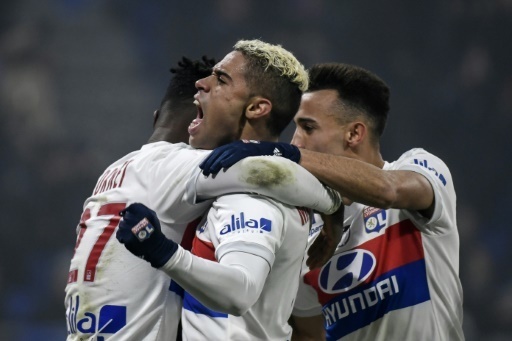 Lyon continued their fine campaign on Sunday, defeating Marseille 2-0 at the Parc OL. Bruno Genesio’s team used goals in each half to earn their second consecutive league win. Mariano’s headed goal in the 51st-minute gave the hosts their insurance goal after Nabil Fekir opened the scoring early. The French midfielder netted his 11th goal in league play, scoring from a left-footed free kick after six minutes. Marseille had plenty of chances to find the back of the net, while Morgan Sanson striking the post as a second-half substitute. Lyon’s Anthony Lopes made five saves in the home clean sheet. Lyon are in third place in Ligue 1, moving three points clear of their opponents.

Elsewhere, Manchester United was victorious at West Brom, while Liverpool routed Bournemouth. Barcelona snatched another three points in La Liga, while Juventus shut out Bologna on the road. Hertha Berlin earned a huge three points on the road in Germany, as all the home sides in Ligue 1 earned wins.

Manchester United used a pair of first-half goals to down West Bromwich Albion 2-1 at the Hawthorns. A duo of goals in an eight-minute span gave Jose Mourinho’s side a 2-0 halftime lead. Romelu Lukaku headed in United’s opener in the 27th-minute before Jesse Lingard doubled the lead from long-range. Gareth Barry’s first league goal since September 2016 pulled the Baggies to within one, but that was the closest United would let them get. David de Gea made four saves in the win, and was the busiest of the two keepers. WBA are in 19th after the defeat, as United remain in second place.

Everton hosts Swansea City on Monday in the final match of Round 18.

Barcelona continued their unbeaten run to the La Liga season, defeating Deportivo 4-0 at the Camp Nou. Luis Suarez and Paulinho sparked the Catalan side with braces apiece. The Uruguayan finished from close range in the 29th-minute for a 1-0 Barca lead. Paulinho doubled the advantage after 41 minutes following Leo Messi striking the post. Suarez finished home Sergi Roberto’s assist each in the second stanza for the hosts before Paulinho scored again from close range. Barcelona was comfortable, creating 11 shots on goal to Deportivo’s three. Ernesto Valverde’s side are six points ahead of second-place Atletico Madrid, and welcome Real Madrid to town next weekend. Deportivo sit in 17th.

Villarreal snapped a three-match winless run on Sunday, edging Celta Vigo 1-0 away from home. Pablo Fornals played hero for the visitors after heading home Carlos Bacca’s across for his first goal of the season. Celta Vigo had three shots on goal, but was unable to earn their first win since Nov. 24th. Villarreal stay in sixth place, while Celta Vigo are in 12th.

Real Betis travels to Malaga on Monday in the final match of Round 16.

Hertha Berlin extended their unbeaten run to four matches in all competitions, defeating RB Leipzig 3-2 at Red Bull Arena. Despite almost seeing a three-goal advantage slip away, Hertha jumped to 10th place. Davie Selke’s opener came after five minutes, before Salomon Kalou doubled the lead from a 31st-minute header. Selke’s second goal of the match extended Hertha’s lead to 3-0 after 51 minutes, after the striker finished from close range. Willi Orban’s header in the 68th-minute started a comeback for Leipzig make it 3-1. Marcel Halstenberg’s stoppage time header hyped the fans up even more but it turned out to be too little too late. Leipzig drops to fifth place after the home defeat.

Juventus continued their chase for the top spot in Italy’s top-flight, downing Bologna 3-0 away from home. Miralem Pjanic and Mario Mandzukic gave the Old Lady a 2-0 first-half lead after goals in the 27th and 36th minutes respectively. Blaise Matuidi’s left-footed finish after the hour mark extended Juve’s lead to 3-0 which would be the final score. Bologna was held to one shot on goal, suffering their second straight loss. Juve moves to second place and sit a point back of league leaders Napoli.

Hellas Verona provided the shock of the round, shutting out AC Milan 3-0 at the Marc’Antonio Benetegodi. Antonio Caracciolo’s first goal of the season gave Verona 1-0 first-half lead after the defender headed in from six-yards out. Moise Kean extended the lead for Verona after 55 minutes, giving the 17-year-old his second goal of the season. Daniel Bessa’s right-footed strike in the 77th-minute capped off the scoring, finishing off from a fast break. Verona keeper Nicolas made eight saves in the clean sheet, giving his side a much-needed three points. The win moves Fabio Pecchia’s side to 13 points on the year, as Milan drop to eighth place.

Nice earned their third victory of the month, defeating Bordeaux 1-0 at the Allianz Riviera on Sunday. Mario Balotelli’s 36th-minute goal proved to be the difference, giving the hosts a boost into sixth place. The Italian tapped home from close range, giving him 13 goals in all competitions this season. Bordeaux was pegged back for most of the match, having only 32% of the possession and one shot on goal. The visitors drop to 15th and have lost seven of their last 10 league fixtures.