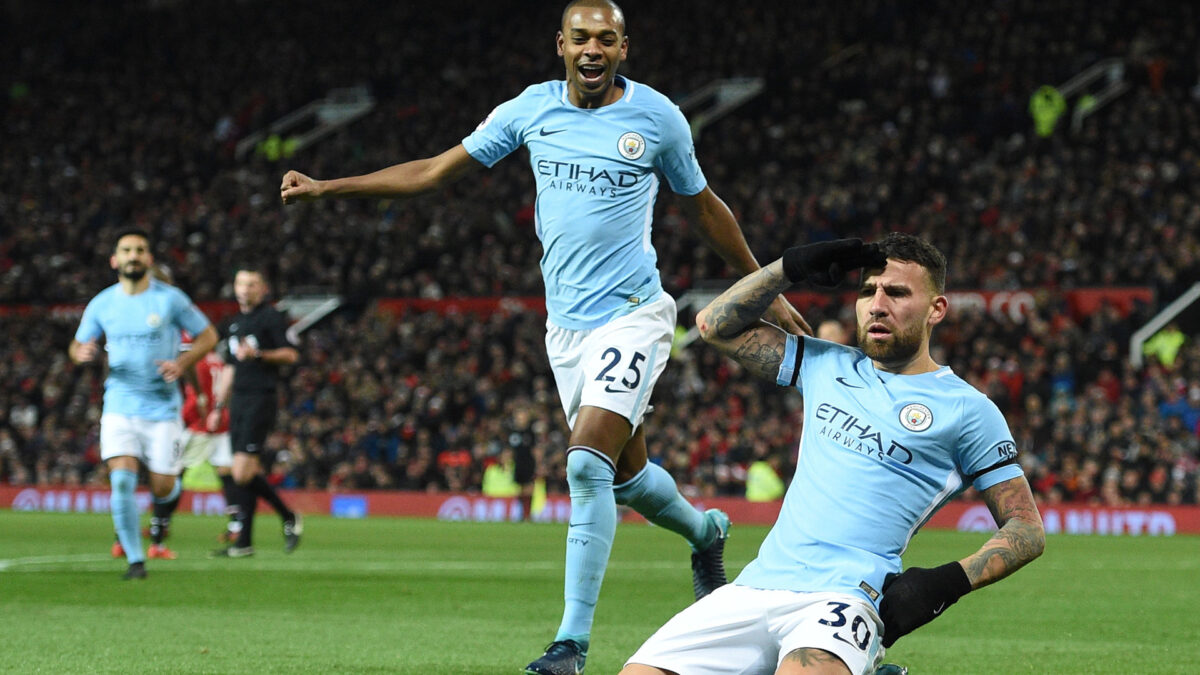 The 175th Manchester Derby took place on Sunday at Old Trafford as the Red Devils looked to remain in the hunt for top spot. Their opponents Manchester City, have rolled their way to an unbeaten start in league play and showed no signs of stopping on Sunday. Pep Guardiola’s men used pair of goals, one in each half to down Jose Mourinho’s side 2-1. David Silva’s opener came in the 43rd-minute for the visitors, before Marcus Rashford canceled it out in stoppage time. Nicolas Otamendi’s close-range finish in the 54th-minute put City back in front, which they would stay for the conclusion of the match. Ederson Moraes made four saves for City in the win, their 15th of the season in EPL action. Manchester United now sit 11 points back of their noisy neighbors, and can not afford any more slip-ups if they want to remain in the title race after Christmas.

Elsewhere in Europe, a Merseyside Derby took place at Anfield while Arsenal traveled to Southampton. Barcelona faced a road trip to Villarreal while Real Betis welcomed Atletico Madrid to town. Napoli hosted Fiorentina in the Serie A match of the day, while Hoffenheim traveled to Hannover in Bundesliga play.

Everton snatched a point at Anfield on Sunday as they played out a 1-1 draw against Liverpool. Wayne Rooney’s penalty kick in the 77th-minute earned the Toffees a huge point as they fought back from a first-half deficit. Mohamed Salah’s opener came in the 42nd-minute as the Egyptian curled home a left-footed effort past Jordan Pickford. It was the winger’s 19th goal in all competitions this season. Sam Allardyce’s side stay in 10th place after the draw, while Jurgen Klopp’s men are in fourth place.

Barcelona also remained unbeaten on the season, using a pair of second-half goals to defeat Villarreal 2-0. Luis Suarez and Lionel Messi both got on the scoresheet for Ernesto Valverde’s men who extended their lead to five points in La Liga. Suarez’s right-footed finish gave Barca a 1-0 lead in the 72nd-minute prior to Messi doubling the lead later in the half. The duo has combined for 21 league goals so far this season, which is good for two of the top seven spots in goals scored. Villarreal sits in sixth place on 21 points, but has lost their last three matches.

Atletico Madrid extended their unbeaten run to 15 matches after defeating Real Betis 1-0 on the road. Saul Niguez played the hero for Diego Simeone’s men, scoring the lone goal in the first-half. The Spaniard slotted home his third goal of the season in all competitions, giving Atletico another three points on the road. Betis had four shots on goal, but was kept out each time by Jan Oblak. Atletico are in third place after the win, while Betis are in 11th after seeing their winless run extend to seven matches.

Espanyol hosts Girona on Monday in the final match of Round 15.

Hannover snapped a four-match winless run on Sunday, defeating Hoffenheim 2-0 at home. Martin Harnik sealed the deal for Hannover in the 85th-minute, heading home Felix Klaus’ cross to give them an insurance goal. Niclas Fullkrug scored the opening goal for Hannover in the 59th-minute, slotting home Salif Sane’s headed assist. It was the German’s sixth goal of the season in all comps. Hannover keeper Philipp Tschauner made five saves in the home clean sheet, their first since Sept. 24th. The winners are in 10th, while Hoffenheim drop to sixth.

The points were shared at the San Paolo Stadium on Sunday as Napoli and Fiorentina drew 0-0. Both sides had similar efforts to find the back of the net, with the hosts out-shooting their opponents 4-3 in shots on goal. Dries Mertens and Marek Hamsik had the best efforts for Napoli while Giovanni Simeone had a pair of efforts for the visitors. Fiorentina stays in seventh place after the draw, while Napoli are in second.

AC Milan snapped a three match winless run in Serie A play, downing Bologna 2-1 at the San Siro. Giacomo Bonaventura propelled the hosts, scoring a brace in the much-needed victory. The Italian’s header in the 76th-minute proved to be the winner after the visitors pegged the hosts back earlier in the first-half. Simone Verdi’s fifth goal of the campaign tied the match for Bologna, after Bonaventura opened the scoring with a long-range shot. Milan sits in seventh place after the win, while Bologna are in ninth and three points behind.

A pair of fixtures concludes Round 16 on Monday. Genoa hosts Atalanta in the early match, while Torino travels to Lazio in the must-watch match of the afternoon.

Lyon bounced back from a Europa League loss to Atalanta, by edging Amiens 2-1 away from home. A second-half brace by Houssem Aouar helped the visitors fight back for three points after conceding early in the first half. Serge Gakpe’s opener came in the ninth-minute for Amiens from close range. Aouar’s equalizer came in the 79th-minute from a right-footed finish for his second league goal of the season. Gael Kakuta missed a golden chance to put Amiens back in front, but saw his penalty kick in the 89th-minute strike the right post. Aouar completed the comeback for Bruno Genesio’s side after he finished on a Lyon fast break. The visitors sit in second place, nine points back of league leaders PSG. Amiens are in 10th after losing their second consecutive match.