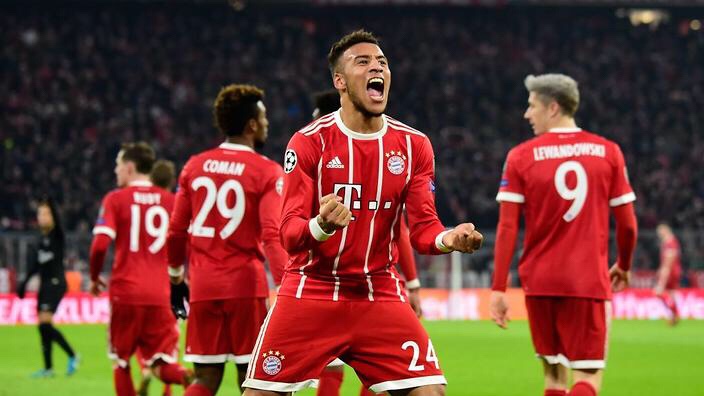 The final match day in 2017-18 UEFA Champions League group stage kicked off on Tuesday with several sides looking to claim spots in the next round.

The top fixture saw Bayern Munich host PSG knowing a lopsided win would see the Germans claim top spot in their group. PSG thumped Bayern 3-0 earlier in the competition, and was looking to bounce back from a weekend loss in Ligue 1.

Elsewhere, Atletico Madrid traveled to Chelsea, while Manchester United faced a home clash with CSKA Moscow. Celtic hosted Anderlecht knowing a point would see them qualify for the Europa League Round of 32.

Bayern Munich exacted revenge on PSG at home, defeating the Ligue 1 leaders 3-1. Robert Lewandowski’s opener came in the eighth minute from close range. Corentin Tolisso headed in Bayern’s second prior to halftime. Kylian Mbappe pulled one back in the 50th-minute for PSG, as the Frenchman headed home Edinson Cavani’s assist. Tolisso’s second goal of the evening came in the 69th-minute from a right-footed finish. Despite their win, Bayern finished as runners-up in Group B on goal difference. PSG topped the group with a +21 goal differential.

Atletico Madrid knew a victory on Tuesday would put them in good shape to make the Round of 16. Diego Simeone’s side fought hard but ultimately fell short, drawing 1-1 at Stamford Bridge. Saul Niguez’s header gave Atletico a 1-0 advantage after the halftime break. However the lead was not held as an Stefan Savic own goal gave Chelsea a share of the points. Jan Oblak made six saves in the road loss for Atletico. Chelsea finishes second in Group C after Roma’s 1-0 win at Qarabag.

Here’s a rundown of all of Tuesday’s UCL results:

CSKA Moscow, Celtic, Atletico Madrid, and Sporting Lisbon all drop into the Europa League Round of 32.