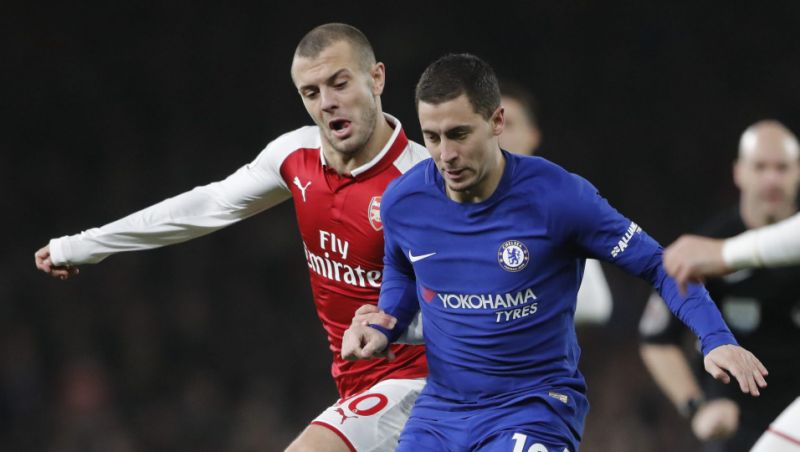 When the calendar flipped to January, soccer fans worldwide knew they would be treated to a gift to begin their new year. English Premier League giants Arsenal and Chelsea were slated to play three matches over the month, with Wednesday’s EPL contest the first of the trio.

Both were still in the race for the ever-changing top four and wanted to earn a massive three points in early 2018. A 92nd-minute equalizer by Hector Bellerin gave Arsenal a share of the points in a thrilling 2-2 draw at the Emirates.

Marcos Alonso looked to have been the hero for Chelsea, putting his side ahead 2-1 in the 84th-minute. The Spanish wingback showed a striker’s touch, sliding Davide Zappacosta’s cross past Petr Cech.

Jack Wilshere’s thunderous opener gave the Gunners a 1-0 advantage after 63 minutes. The 26-year-old was making his 10th league appearance of the season and was on a good run of form for the club.

Wilshere benefited from a deflection inside of the box, before beating Thibaut Courtois to the top-left corner.

The lead only lasted four minutes for Arsenal after Eden Hazard was tripped in the box by Bellerin. Bellerin reached for a loose ball but instead caught the Belgian international forcing Anthony Taylor to point to the spot.

Hazard made no mistake, slotting home his eighth goal in all competitions this season.

N’Golo Kante’s deflected effort has Petr Cech scrambling just minutes later, as both keepers made important saves earlier in the match. Alexandre Lacazette was kept out by Courtois, while Tiemoue Bakayoko and Alonso were frustrated by the 35-year-old Cech.

Zappacosta was able to beat Ainsley Maitland-Niles down the right flank and set up Alonso for his sixth goal of the season. After some heroic defending by the Blues, Bellerin made up for his earlier mistake volleying home past Courtois for his first Premier League goal of the season.

Zappacosta’s last gasped effort struck the crossbar, ending the match at 2-2. Chelsea remains in third place on 46 points, knowing a win would have seen them move to second.

Arsenal sits in sixth place, but extends their unbeaten run to nine matches after claiming a late point.

These two will begin their EFL Cup semifinal draw against one another at Stamford Bridge on January 10th.