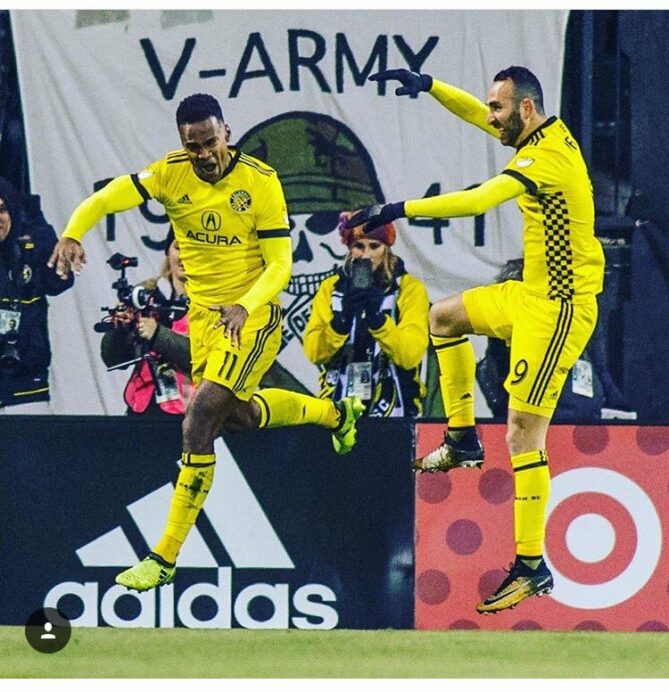 Two huge pieces to the Columbus Crew’s success in 2017 was the playmaking and scoring ability of forwards Justin Meram and Ola Kamara. The duo combined for 33 goals and nine assists, helping the Crew to a playoff berth and an Eastern Conference Finals appearance last season.

However, last season may mark the final seasons for the pair in Columbus after both have asked to be moved from the club. According to MLS, four sources have confirmed that the star attackers want out from Gregg Berhalter’s squad for different reasons.

Kamara, 28, was targeted by the LA Galaxy last season and has still yet to receive a new contract from his current club. The Norweigan has scored 35 league goals in two seasons since joining from Molde of Norway’s Eliteserien. Meram, 29, signed a new contract last March but is seeking a new challenge in his career.

“Both Ola and Justin play an important role in our competitive ambitions for 2018. However, every club must evaluate opportunities to strengthen their roster and heighten their player’s professional development. Any offer for Justin or Ola would have to significantly benefit the club considering they are two of the most productive offensive players in the league and have multiple years remaining on their contracts with Crew SC,” Berhalter said.

The Michigan native played in the USL the past three seasons, seeing time with both the Rochester Rhinos and Saint Louis FC. During his time with Rochester, Grinwis helped them to the USL regular season title and the USL Cup in 2015.

Grinwis is expected to be backup for Orlando City, sitting behind Joe Bendik.

“Adam impressed in our pre-season friendly last season and has a track record of success in the USL,” Lions general manager Niki Budalic said in a team statement. “His athleticism, character and competitiveness will fit in well with our group of goalkeepers.”

Real Salt Lake are close to adding Welsh international Adam Henley to their roster, according to MLS.

The 23-year-old fullback was born in Tennessee and is currently without a club. Henley came up through the Blackburn Rovers youth system in England, playing with the first team from 2011 to May 2017. He has made 80 combined appearances for Blackburn in both the English Premier League and the EFL Championship.

Under former Houston Dynamo manager Owen Coyle, Henley saw his last first-team minutes back in August 2016. He has made two appearances for Wales, most recently as a substitute in a 2016 friendly vs. Ukraine.

The New England revolution added defender Gabriel Somi to their squad on Friday, acquiring him on a free transfer.

Somi, 26, most recently played with Ostersunds FK of the Swedish Allsvenskan in 2016-17, playing in 44 matches and scoring four goals. He helped Ostersunds to the Svenska Cupen, and made eight combined appearances in qualifiers and the group stage in the 2017-18 UEFA Europa League.

“We are very pleased to add a versatile player in Gabriel who has the ability to help contribute at both ends of the field,” Revolution General Manager Michael Burns said. “We look forward to seeing the impact he will have on the field in 2018 and beyond.”