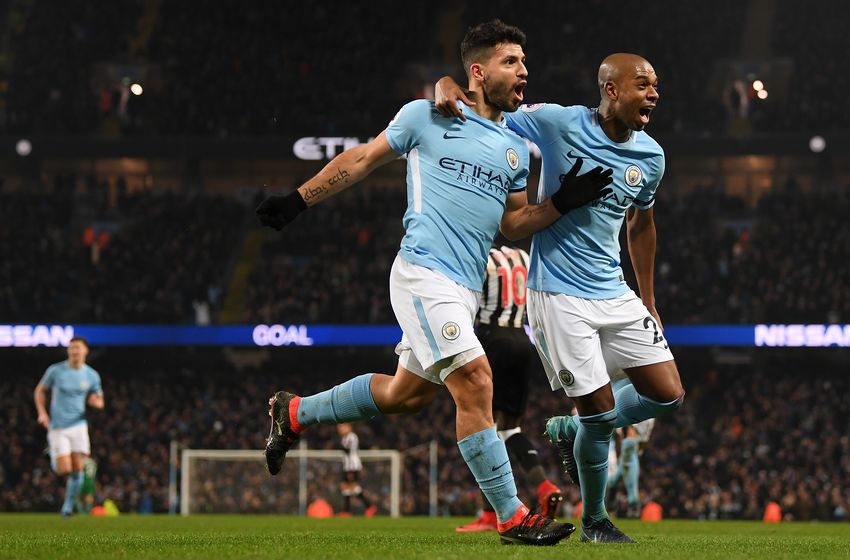 The goal for Manchester City coming into Saturday’s league clash with Newcastle was to bounce back from their first loss of the season a week ago. Pep Guardiola’s side showed a short memory, easing past Newcastle United, 3-1, at the Etihad Stadium.

Sergio Aguero capped his 200th Premier League appearance by netting a hat trick in the win. The Argentine opened the scoring after 34 minutes, flicking Kevin De Bruyne’s cross past Karl Darlow. Aguero added to the City lead in the 63rd-minute beating the Newcastle keeper to the left side of the goal from the penalty spot. Jacob Murphy pulled one back for the visitors four minutes later on a breakaway, before Aguero sealed the points from a loose ball in the box. The win keeps City 12 points clear of Manchester United, while Newcastle stay in 15th with the road loss.

Elsewhere in Europe, Borussia Dortmund faced off with Hertha Berlin on Friday while Borussia Monchengladbach played host to Augsburg on Saturday. Atletico Madrid hosted Girona in La Liga action, as Valencia traveled to Las Palmas. Marseille kicked off the Ligue 1 round by facing off with Caen, while Bordeaux traveled to Nantes.

Stoke City handed new manager Paul Lambert a win in his first match in charge, downing Huddersfield 2-0 at home. Welsh international Joe Allen opened things after 53 minutes, scoring his fourth goal of the season in all comps. The midfielder slid home Eric Maxim Choupo-Moting’s assist into the bottom right corner. The Potters got their insurance tally through Ghanaian forward Mame Biram Diouf, who finished off Xherdan Shaqiri’s helper past Jonas Lossi. David Wagner’s side only had three shots on goal, losing their third in a row in league action. Stoke climb up to 17th with the three points.

The points were shared in Madrid on Saturday as Girona pegged Atletico back in a 1-1 draw. Portu’s right-footed finish after 73 minutes earned the visitors a point after going down in the first-half. Antoine Griezmann’s sixth league goal of the season had Diego Simeone’s team in front after 34 minutes, but it proved to not be enough. The Spanish midfielder netted his eighth goal of the season to give Girona their second draw against Atletico this season. The hosts stay in second place, while the visitors are in eighth.

Las Palmas snapped a seven-match winless run on Saturday, defeating third-place Valencia 2-1 at home. The hosts canceled out an early deficit by scoring a goal in each half for the three points. Jonathan Viera’s right-footed finish in the 20th-minute pulled the hosts level, after Santi Mina’s header had Valencia in front early. Former West Ham man Jonathan Calleri converted from the penalty spot after 53 minutes to put Palmas ahead for good. Valencia saw two players sent off in the defeat, their first since Dec. 23rd. Palmas are up to 19th with the huge upset.

Borussia Dortmund was able to cancel out a one-goal deficit on Friday in a 1-1 draw at Hertha Berlin. Shinji Kagawa’s close-range header had snatched Dortmund a point after going down earlier in the second-half. Davie Selke’s ninth goal in all competitions had Hertha in front a minute into the second 45. Kagawa’s fourth league goal of the season was crucial for Dortmund as they picked up a point on the road. Christian Pulisic played 85 minutes for Peter Stoger’s side, having one shot on target. Dortmund drop to fifth place, while Hertha are in 11th.

Borussia Monchengladbach jumped into fourth place following their 2-0 home win on Saturday against Augsburg. Dieter Hecking’s side held onto an early lead for the majority of the match, then receiving the icing on the cake in second-half stoppage time. Matthias Ginter’s 10th-minute header saw Gladbach up early, after the defender finished off Thorgan Hazard’s cross. Hazard slammed the door shut in the 90th-minute, beating Marwin Hitz from long-range. The Belgian midfielder made it seven league goals on the season, lifting his team into the top four. Augsburg dropped to eighth after the loss.

Marseille kicked off Round 22 in Ligue 1, edging Caen 2-0 on Friday at the Stade Michel-d’Ornano. After being held for 45 minutes, the visitors got their breakthrough goal ten minutes into the second-half from the penalty spot. Dimitri Payet converted the penalty after 55 minutes, giving him four goals on the season. Florian Thauvin reached double figures on the season, rifling home from long-range for a 2-0 cushion. Caen who did not get much offensively, fell for the second time in the new year. Marseille jump up to second place for now with Lyon in action tomorrow.

Bordeaux picked up their second victory of the new year, edging Nantes 1-0 away from home. The visitors lone goal came from Nicolas de Preville after 26 minutes, thanks to a strong header from the forward. It was the 27-year-old’s second goal for the club since joining from Lille earlier this season. Bordeaux keeper Benoit Costil kept Nantes out for times for the clean sheet. The visitors jump to 12th with the win, while Claudio Ranieri’s side remain in fifth.