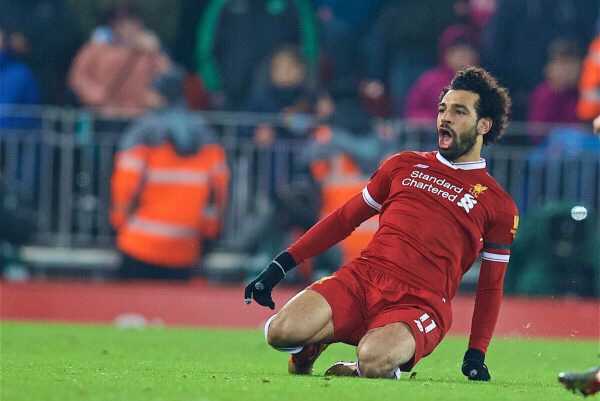 Coming into 2018 the question throughout the Premier League was whether or not Manchester City could keep their unbeaten run going. Jurgen Klopp’s Liverpool killed those dreams on Sunday edging the league leaders, 4-3 at Anfield.

The sides played out an even first-half as Leroy Sane canceled out Alex Oxlade-Chamberlain’s opener. Roberto Firmino chipped Ederson in the 59th-minute to retain the lead for the Reds before the rout started. Sadio Mane’s left-footed missile beat the Brazilian keeper to the top-left corner before Mohamed Salah finished from long-range. Composed finishes by Bernardo Silva and Ilkay Gundogan made things interesting late, but the Reds would hang on. The constant pressure defensively by Klopp’s men proved to be very important as it frustrated Manchester City, and eventually handed them their first league loss since April 2017. City hold a 15 point lead over second-place Manchester United who play on Monday, while Liverpool up to third place.

Here’s a rundown of all of Sunday’s European action:

Arsenal’s winless run continued on Sunday as the Gunners fell 2-1 at the Vitality Stadium against Bournemouth. A pair of second-half goals by the Cherries gave them a huge home win after fighting back from a 1-0 deficit. Callum Wilson’s sixth league goal of the season drew Eddie Howe’s side level after Hector Bellerin opened things for Arsenal. Jordan Ibe’s first goal for the club proved to be the winning one as the winger finished off Wilson’s assist after 74 minutes. Arsenal was held to three shots on goal, and lacked creativity without Alexis Sanchez and Mesut Ozil who both missed out. Bournemouth moved up to 13th with the win, as Arsenal sit in sixth.

Manchester United host Stoke City on Monday in the final match of Round 23.

Sevilla was handed their third straight league defeat on Sunday, falling 1-0 away from home at Alaves. Following a scoreless first-half, Manu Garcia broke the deadlock for Alaves, scoring from a right-footed finish in the 52nd-minute. It was the 31-year-old’s second league goal of the season and it proved to be the winner. Sevilla, who have found it tough to score consistently this new year, was held to one shot offensively towards goal. The defeat drops Sevilla into sixth place, while Alaves moved to 17th and out of the bottom three with the home upset.

Barcelona fought their way back from a 2-0 deficit to defeat Real Sociedad 4-2 at Anoeta. Luis Suarez and Lionel Messi totaled three goals between them in the second-half to complete the comeback. Willian Jose and Juanmi each netted goals in the first-half to give the hosts a two-goal advantage. Paulinho pulled one back for Barcelona after 39 minutes, giving the Brazilian seven goals on the season. Suarez drew the sides level in the 50th-minute before giving his side the lead after 71 minutes. Messi’s wonderful free kick after 85 minutes adding some insurance for the visitors. The win keeps Barcelona nine points clear at the top of the league summit. Sociedad dropped to 15th, after losing their second consecutive match.

Real Betis hosts Leganes on Monday in the final match of Round 19.

League victories have been hard to come by for Koln this season, who came into Sunday’s showdown with Borussia Monchengladbach with only one. Stefan Ruthenback’s side claimed a massive three points at home, winning 2-1 in dramatic fashion. Simon Terodde’s header in the 95th-minute proved to be the winner as Koln won it late. Raffael’s right-footed finish after 69 minutes drew Gladbach level as the Brazilian scored his seventh goal of the season. Frederik Sorensen’s right-footed finish had given Koln a 1-0 lead going into halftime. Terodde’s first goal of the season since his move from Stuttgart saw Koln move to seven points from safety. Gladbach sit in sixth following the road loss.

Paris Saint-Germain continued their current winning run in Ligue 1 action, defeating Nantes 1-0 away from home. Unai Emery’s side received a winning goal from Angel Di Maria after 12 minutes. The Argentine’s left-footed strike beat Ciprian Tatarusanu to the bottom-left corner. The hosts had three shots on goal but could not find a way past Alphonse Areola. Nantes defender Diego Carlos saw a second yellow card late which reduced the hosts to 10 men. PSG’s lead at the top of the table extended to 11 points while Nantes remains in fifth.