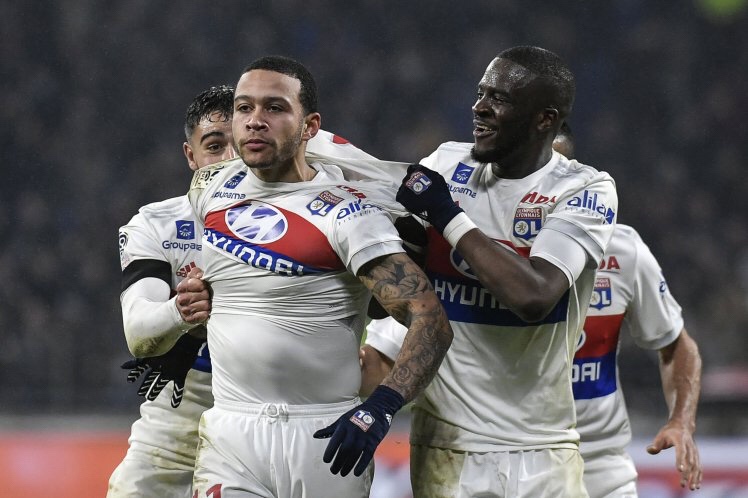 The top two teams in Ligue 1 squared off at the Parc OL on Sunday, with hosts Lyon edging PSG 2-1. Memphis Depay played the hero scoring the game-winner in the 94th-minute. The Dutch winger beat Alphonse Areola from long-range, finding the top-left corner with a right-footed effort. Layvin Kurzawa drew the sides level before halftime, finishing Dani Alves’ assist for his second league goal of the season. Nabil Fekir’s wicked free kick two minutes in had Lyon up early. Alves saw a straight red after 57 minutes for a nasty foul on Tanguy NDombele. The hosts outshot the league leaders 6-to-3 earning their first win over PSG in two seasons. Unai Emery’s side are eight points ahead in the standings, but know they need to get back to form for a chance at the league title.

Tottenham Hotspur was handed their second draw of the new year, being held 1-1 on the road at Southampton. Mauricio Pochettino’s side was without goalkeeper Hugo Lloris and midfielder Christian Eriksen in the match. Harry Kane’s 18th-minute header drew Spurs level, after an own-goal by Davinson Sanchez three minutes prior gave Saints a 1-0 lead. Michel Vorm made four saves in the draw, while Alex McCarthy made one. Kane missed a clear-cut chance in stoppage time from close-range which summed up the day for the London side. Spurs remain in fifth place while Southampton drop to 18th.

Swansea City hosts Liverpool in the final match of Round 24 on Monday.

Barcelona used a five-goal second half to defeat Real Betis 5-0 on the road. After getting held scoreless in the first half, Barcelona got their opener through Ivan Rakitic. The Croatian’s left-footed finish gave Barca a 1-0 lead in the 59th-minute. Lionel Messi extended the lead five minutes later scoring his 18th league goal of the season. Luis Suarez’s right-footed strike made it 3-0 before the Uruguayan set up Messi for his second of the match. Messi played distributor on Barcelona’s final goal of the match, setting up Suarez for his 13th goal of the campaign. Barca now sits 11 points ahead of Atletico Madrid after the win. Betis drop to 11th with their first loss since Dec. 22nd.

Real Madrid shook off an early deficit to roll past Deportivo 7-1 at the Santiago Bernabeu. Finishes from Nacho and Gareth Bale put Los Blancos ahead 2-1 going into halftime, after Adrian Lopez opened things for the visitors. Bale’s second of the afternoon came in the 58th-minute as the Welshman headed home Toni Kroos’ cross. Luka Modric’s long-range strike extended the hosts lead to 4-1 before Cristiano Ronaldo netted a pair. CR7 finished from close-range in the 78th-minute for his first goal before heading home from close range. Nacho’s left-footed finish capped the final score at 7-1 for Zinedine Zidane’s men in a much-needed home win. Madrid are in fourth after the win, five points back of third-place Valencia in the standings. Deportivo are in 18th, two points from safety.

Eibar hosts Malaga on Monday in the final match of Round 20.

Bundesliga leaders Bayern Munich made it eight wins in a row in all competitions, defeating Werder Bremen 4-2 at the Allianz Arena. Thomas Muller and Robert Lewandowski both scored braces for the winners, who pulled away from a 2-2 scoreline at one time. Jerome Gondorf’s right-footed finish after 25 minutes gave Bremen a 1-0 lead before Muller equalized before halftime. Lewandowski put Bayern ahead in the 63rd-minute as he headed home James Rodriguez’s assist. An own-goal off of Niklas Sule drew the visitors level in the 74th-minute before Bayern flexed their muscles. Muller hit Lewandowski with a perfect cross two minutes later to put the leaders back in front. The German international scored his fourth goal of the season after 84 minutes to put the final nail in the coffin. The victory sees Bayern 14 points in front of Schalke while Bremen remains in 16th place.

Here’s all of Sunday’s Bundesliga’s results:

The must-watch match in Italy’s top-flight came from Milan as Inter hosted Roma at the San Siro. Matias Vecino’s equalizer after 86 minutes grabbed the hosts a share of the points. Stephan El Shaarawy opened things for Roma in the 31st-minute finishing off his fourth goal of the season. The visitors were only the backfoot most of the match, allowing seven shots on goal to Inter. Roma could only muster one shot towards goal in the draw. Inter drops to fourth place while Roma sits in fifth.

Napoli continued their grasp on the number one spot in Serie A, downing Atalanta 1-0 at the Atleti Azzurri d’Italia. After being held in the first-half, Maurizio Sarri’s side got their breakthrough through the form of Dries Mertens. The Belgian midfielder got on the end of Jose Callejon’s assist and scored past Etrit Berisha. Both sides had three shots on goal in the match, with Napoli extending their league winning run to five matches. Atalanta dropped their first result of 2018, falling to eighth place.

Genoa travels to Juventus on Monday in the final match of Round 21.

AS Monaco extended their unbeaten run to six matches on Sunday, defeating Metz 3-1 at home. The hosts pulled away in the second-half after holding a one-goal lead into the halftime break. Jorge’s left-footed missile separated the sides in stoppage time, giving Monaco an advantage. The visitors saw their chances at a comeback take a hit after 50 minutes when Eiji Kawashima saw a straight red for a challenge on Radamel Falcao. Rachid Ghezzal’s left-footed finish gave Monaco a two-goal lead in the 67th-minute before Metz pulled one back. Ibrahima Niane’s first goal of the season gave the visitors some life, as the substitute headed home from close range. Rony Lopes’ right-footed finish slammed the door shut on any comeback hopes for Metz, extending the score to 3-1. Monaco jump to third place with the win, while Metz are bottom of the table.