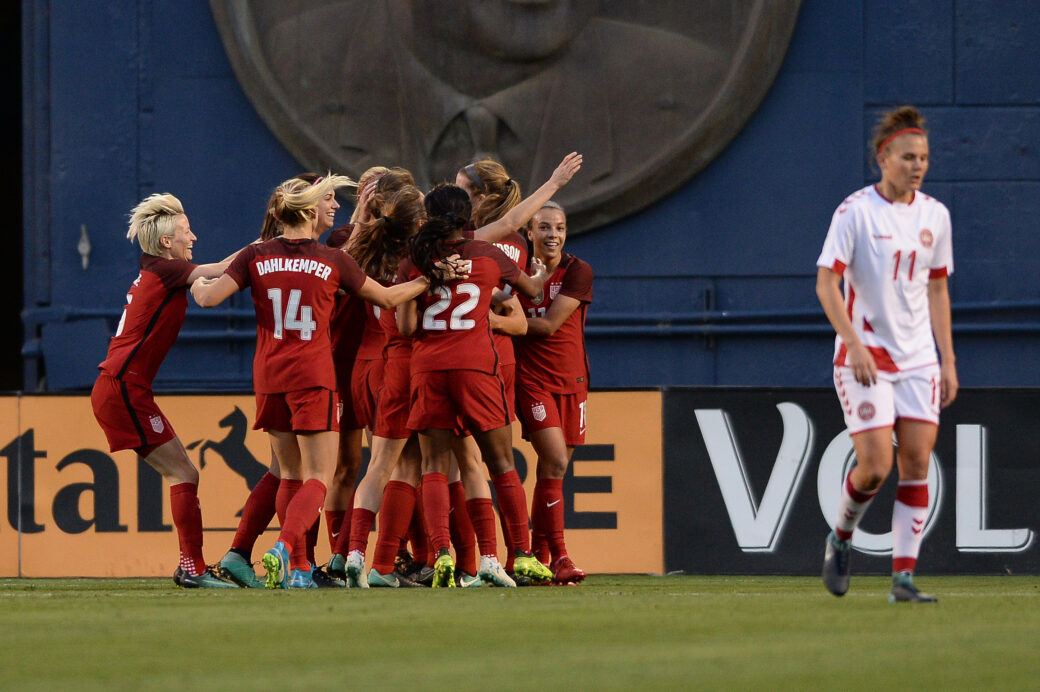 Mallory Pugh, in her return from injury, managed to get a brace in the process, while usual heavy-hitter Alex Morgan, the night’s captain, also got on the scoresheet. Crystal Dunn joined them with a goal, as did Julie Ertz, who is making a name for herself as a goal-scoring defensive midfielder.

While some usual suspects made their expected impact, there were new faces among the group, as collegiate athletes Tierna Davidson and Savannah McCaskill received their first caps.

Here is a closer look at the USWNT’s opening match of the year:

DENMARK NOT UP TO THE TASK

The U.S., by all accounts, was in charge of the match and deservedly so. As the reigning world champions boasting the type of talent they do, it may not even be the biggest surprise. However, their opponents did not show up.

The visitors rotated their team a bit to face the USWNT, which may explain their performance on the night. That being said, for many players who are currently in the middle of their club seasons, compared to their opponents, who had not played a professional match since November, the display was a bit of a shock.

They were sloppy all night long, from front to back. Their messy backline led to many chances from the U.S., and a few of their goals. Alex Morgan was left alone in front of goal when she scored, and Mallory Pugh’s second was the result of a turnover. Their midfield found it difficult to get any sort of edge against the likes of Julie Ertz, Lindsey Horan, and Andi Sullivan, resulting in an inactive and ineffective attack.

As the runners-up of last summer’s European Championships where they put on a brilliant show, the way the match turned out was unexpected in that regard.

PUGH PICKS UP FROM WHERE SHE LEFT OFF

One of the night’s standouts, Pugh picked up a brace in her first match since picking up a hamstring injury in October. She highlighted her strong performance with a second half brace to put the game out of reach for the Danes.

Her goals, though, were not her only contribution. Playing as one of the wide forwards, she remained active throughout her 70 minute stretch, pestering the shaky Denmark defense. The first half also saw her record an assist on Alex Morgan’s 17th minute equalizer. In typical Pugh fashion, she demonstrated her skills in the way that left many mesmerized when she first appeared on the team two years ago.

Her return, and in such form, has likely put her on the path to retain the wide forward spot. She seemed to be Jill Ellis’ first choice in the role before she picked up the injury, and in the time she missed, the position was rotated. Crystal Dunn, Christen Press, and Lynn Williams all took a crack at it, neither of them sticking enough to get the nod more than once, or over Pugh against Denmark. The gig may not be Pugh’s yet, but another piece of the puzzle might have been figured out.

Speaking of the trio that are competing with Mallory Pugh for a spot up top, those three did end up making the field against Denmark, but as substitutes. Dunn, Press, and Williams came on after 70 minutes to replace Pugh, Morgan, and Megan Rapinoe, Ellis’ first choice attacking trio.

The results were as good as could be with only 20 minutes left and up three goals. The trio even combined for the night’s final goal, when Williams’ pass found Press, who took a shot. Denmark’s goalkeeper, Lykke Petersen, blocked that shot, but the ball ended up at Dunn’s feet for the final goal of the match.

Other attacking options off the bench include Carli Lloyd, who continues to be deployed as a super sub. The option to use Lloyd continues to come once Ellis takes a natural defensive midfielder off, usually Julie Ertz, who this time was sent to center back instead of the bench. The coach is finding a way to include her many attacking talents.

The U.S. was presented with the unusual task of playing without co-captain Becky Sauerbrunn, who left camp nursing a stress reaction in her foot. Going into the match, Ellis had the likes of Casey Short and Taylor Smith, players who have mostly slotted in at right back for the U.S., fringe player Emily Sonnett, first choice defensive midfielder Ertz, and uncapped Davidson. She picked Davidson.

The Stanford looked up for the challenge in her 90 minute display, partnering Abby Dahlkemper. While remaining defensively solid, the debutante even got an assist, heading the ball to Ertz before the midfielder scored. It was a respectable debut that may see her invited back to camp and competing for the limited spots as center back cover.

As for the right back position, there has been a bit of shuffling there. Short was the main choice there in 2017, but she did not make the squad against Denmark. Instead, Smith started and Sonnett got 37 minutes in the second half. Neither made a genuine mark on the position, meaning there is still some work to do there for Ellis.

LACK OF DEPTH IN FRONT OF DEFENSE

The U.S. is known for their long list of attacking players, and the depth matches up on other places of the field. While not every position has a locked in starter, Ellis has a few go to players to at least rotate through before she eventually has to make a choice. There is one position where the depth is non-existent at the moment, and that is at defensive midfield.

Julie Ertz is indisputably the best choice there, and has been a standout since slotting in there last year. However, once Ellis either switches her out or moves her to center back, the team is frequently left without a natural defensive midfielder on the pitch. That move recently has coincided with the entrance of Lloyd, who is included in an all out attack that can be used when the team is looking for goals. In that case, a defensive midfielder may not be a necessary part of the equation.

However, in the case of Ertz being unavailable for whatever reason, be it injury, suspension, or needing rest, there seems to be no genuine second choice. That reflects problems the team has had since the retirement of Shannon Boxx in 2015. There was no heir apparent in that position, which was evident even before her retirement, as Boxx missed a significant amount of time before making the 2015 World Cup squad. While Ertz has proven to be Boxx’s genuine successor, concerns still lie at that position.