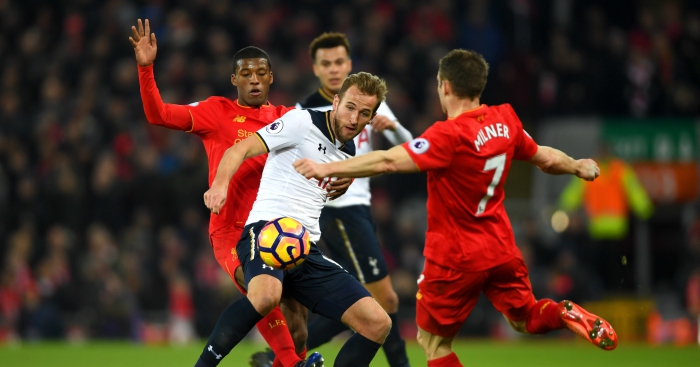 The opening weekend of February gets underway with a bang as two of the top five teams in England face off on Merseyside. Liverpool welcome Tottenham Hotspur to Anfield on Sunday, looking to build off Tuesday’s beatdown of Huddersfield.Jurgen Klopp’s men are third in the table, and three points back of Manchester United for second. Star attackers Roberto Firmino and Mo Salah have combined for 30 league goals this season. Tottenham are unbeaten in nine straight, including a 2-0 home win against Manchester United earlier this week. Harry Kane has been a one-man wrecking crew for the North London side, scoring 21 goals so far in the league. New signing Lucas Moura joined Spurs from PSG earlier this week, and is expected to be available for Mauricio Pochettino this weekend.

Elsewhere in Europe, Everton face a tough test at Arsenal, while Burnley hosts Manchester City. Real Madrid shouldn’t have a problem away at Levante, while Atletico Madrid faces off with Valencia. Borussia Dortmund kick off the round in the Bundesliga as they travel to Koln. Benevento will look for a shocking upset in Serie A as they host league leaders Napoli.

Saturday’s finale sees Arsenal face off with Everton at the Emirates Stadium. The Gunners fell shockingly 3-1 at Swansea midweek, and will hope to bounce back at home. With the departure of Alexis Sanchez earlier this month, Arsenal acquired Gabon international Pierre-Emerick Aubameyang on Transfer Deadline Day. The 28-year-old had 20 goals with Borussia Dortmund before making the move to North London. Everton snapped a seven-match winless streak with a 2-1 triumph against Leicester midweek. Former Gunners winger Theo Walcott netted a brace in the win, and has three goals in total since his move to Goodison Park.

This weekend’s premier fixture in Spain’s top-flight sees Atletico Madrid welcome Valencia to the Wanda Metropolitano on Sunday. The gap between the two sides is six points, with Atletico ahead in second place. Diego Simeone’s side defeated Las Palmas 3-0 at home last weekend, thanks to goals from three different players. Antoine Griezmann has seven goals for the team, with two coming in January. Valencia are losers of their last four matches in all competitions, only scoring three goals over that span. For any chance of winning on Sunday, the visitors will need to get more from their attacking front of Simone Zaza, Santi Mina, and Rodrigo.

Real Madrid will look to keep pace with the rest of the top-four as they travel to lowly Levante on Saturday. Los Blancos have won their last two league fixtures by scores of 7-1 and 4-1 respectively. Since his early season struggles in the league, Cristiano Ronaldo has upped his league total to eight goals, including four in those two victories. Levante snapped a four-match losing run with a 2-2 draw at Deportivo last weekend. 23-year-old Ivi Lopez has four goals this season, including a pair in their draw last week.

Borussia Dortmund kicks off Round 21 in the German Bundesliga with a road test at Koln on Friday. They have started the new year with three consecutive league draws, scoring three goals over that span. With Pierre-Emerick Aubameyang leaving for the Premier League, Michy Batshuayi steps into his place. The Belgian scored 10 goals in all competitions with Chelsea so far this season. Koln are unbeaten in their last three matches, with two of those three being wins. Simon Terodde has three goals for the club since his January move from Stuttgart earlier this year.

One point separates RB Leipzig and Borussia Monchengladbach in the league standings, and the two close out Saturday’s action with a showdown against one another. Gladbach, the hosts, are in seventh place with 31 points this season. Two important pieces for Dieter Hecking’s side have been playmaking midfielder Thorgan Hazard (seven goals) and forward Raffael (seven goals). Leipzig have dropped to fifth place with a defeat and a draw respectively in their last two matches. German international Timo Werner’s 10 goals lead the team and will increase with more chances this season.

A battle of sixth vs. tenth kicks off the round in Italy’s Serie A as Sampdoria faces Torino at the Luigi Ferraris. The hosts are unbeaten in three straight, with a pair of wins against top competition. 35-year-old Fabio Quagliarella has been one of the big surprises in Europe, scoring 16 goals so far. Torino are also unbeaten in their last three matches, shutting out Bologna and Benevento in the process. With Andrea Belotti slacking in production from a year ago, Iago Falque has helped picked up the slack. The Spanish forward has nine goals in league play so far.

Sunday’s evening showdown features league leaders Napoli travel to newly promoted Benevento. Maurizio Sarri’s side are winners of six straight in league play, and their last three overall. Dries Mertens’ 13 goals lead the team this season, who are 50 points better off than their opponents. Benevento has struggled this season in Italy’s top-flight, earning only two wins this season. A pair of 3-0 defeats have seen the league minnows sitting 12 points from safety in the table. Massimo Coda leads the team with three goals this season, but will need to do more for his team to have a chance at an upset.

A pair of the top three highest scoring teams in Ligue 1 will duke it out at the Stade Louis II on Sunday. Fourth-place Monaco welcomes second-place Lyon to town looking to overake them in the standings. Monaco are unbeaten in eight-straight, including Wednesday’s Coupe de la Ligue semifinal win against Montpellier. Radamel Falcao has 21 goals in all competitions this season, and is coming off a brace midweek. After a huge win against PSG prior, Lyon fell 3-1 at Bordeaux last weekend. It was their first league loss since Nov. 29th and a shocking one to say the least. French midfielder Nabil Fekir has been one of the better two-way players in the league this season, scoring 16 goals and adding six assists.