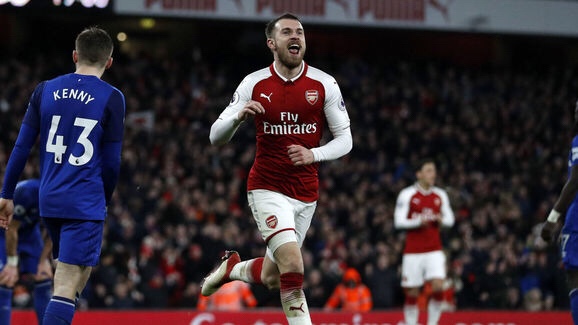 Arsenal cruised their way to three points once already this season against Everton, rolling to a 5-2 win back in October at Goodison Park. Arsene Wenger’s men used a hat trick from Aaron Ramsey to defeat the Toffees 5-1 at the Emirates on Saturday. The Welsh midfielder opened things after six minutes, finishing Henrikh Mkhitaryan’s assist to the bottom-right corner. Laurent Koscielny’s close-range header extended the Gunners lead in the 14th-minute ahead of Ramsey’s second goal of the afternoon. Pierre-Emerick Aubameyang kicked off his Arsenal career with his first goal to make it 4-0 heading into halftime. Dominic Calvert-Lewin’s header pulled a goal back for the Toffees after 64 minutes but it was the lone bright spot for the visitors. Ramsey capped his hat trick after 74 minutes, giving him six goals on the season. Sam Allardyce’s men drop to 10th place with the loss while Arsenal sit in sixth.

Elsewhere in Europe, RB Leipzig used a late winner to defeat Borussia Monchengladbach. Bayern Munich eased past Mainz away from home, while Burnley held Manchester City. The points were shared between Sampdoria and Torino, while PSG defeated Lille away from home.

Burnley snatched a late point at Turf Moor on Saturday, holding Manchester City to a 1-1 draw. Johann Burg Gudmundsson’s half volley in the 82nd-minute drew Sean Dyche’s side level after the hosts had the better of the second-half. Danilo’s second goal of the season was an absolute missile into the top-right corner after 22 minutes. Nick Pope made six saves for Burnley, while Raheem Sterling missed a golden chance to put the match away in the second-half. City remains 13 points ahead of second-place Manchester United, while Burnley are in seventh.

Real Madrid was pegged back twice on the road at Levante, drawing 2-2 at the Cuitat de Valencia. An 89th-minute finish from Giampaolo Pazzini drew the hosts level for the second time of the match. It canceled out Isco’s fifth league goal of the season, which came eight minutes prior. Emmanuel Boateng’s long-range strike brought Levante level heading into halftime, after Sergio Ramos headed Los Blancos in front after 11 minutes. Levante sit in 17th after earning a point, while Real are in fourth.

Borussia Dortmund claimed their first victory of 2018, defeating Koln 3-2 away from home. Michy Batshuayi kicked off his account with his new club, netting a pair of goals in the win. The Belgian’s first goal came in the 35th-minute which had Dortmund up 1-0 heading into the break. Simon Zoller’s header on the hour mark drew Koln level before Batshuayi finished off Christian Pulisic’s assist. Koln drew level for a second time, again getting the better of Dortmund on a set piece. Jorge Mere headed past Roman Burki in the 69th-minute for his first goal of the season. Batshuayi played distributor on Dortmund’s winner, a strong finish by Andre Schurrle in the 84th-minute. Dortmund move up to fourth with the three points, while Koln remain bottom.

Ademola Lookman opened his account with RB Leipzig, scoring the winner in his side’s 1-0 road win at Borussia Monchengladbach on Saturday. The Everton-loanee slid home Naby Keita’s assist in the 89th-minute on his debut for the club. Peter Gulasci made three saves in the clean sheet for Leipzig, who move up to third. Gladbach drop to seventh after losing their second consecutive league match.

The points were shared at the Luigi Ferrari on Saturday as Sampdoria drew 1-1 with Torino. Afriyie Acquah’s 25th-minute blast canceled out an 11th-minute free kick by Sampdoria’s Lucas Torreira. Torreira’s fourth goal of the season sent the home fans into excitement, as the Uruguayan beat Salvatore Sirigu to the bottom-right corner. Acquah’s first goal of the season snatched a point for Torino, who are up to ninth place. The hosts remain in sixth.

Paris Saint-Germain made it back-to-back league wins after a 3-0 triumph at Lille on Saturday. Yuri’s opener in first-half stoppage time gave Unai Emery’s side a 1-0 lead heading into halftime. Neymar netted his 18th league goal of the season, scoring a from a wonderfully placed free kick. Giovani Lo Celso stamped the final score at 3-0, scoring from long-range after 87 minutes. Alphonse Areola made three saves in the win, which dropped Lille into the relegation zone.