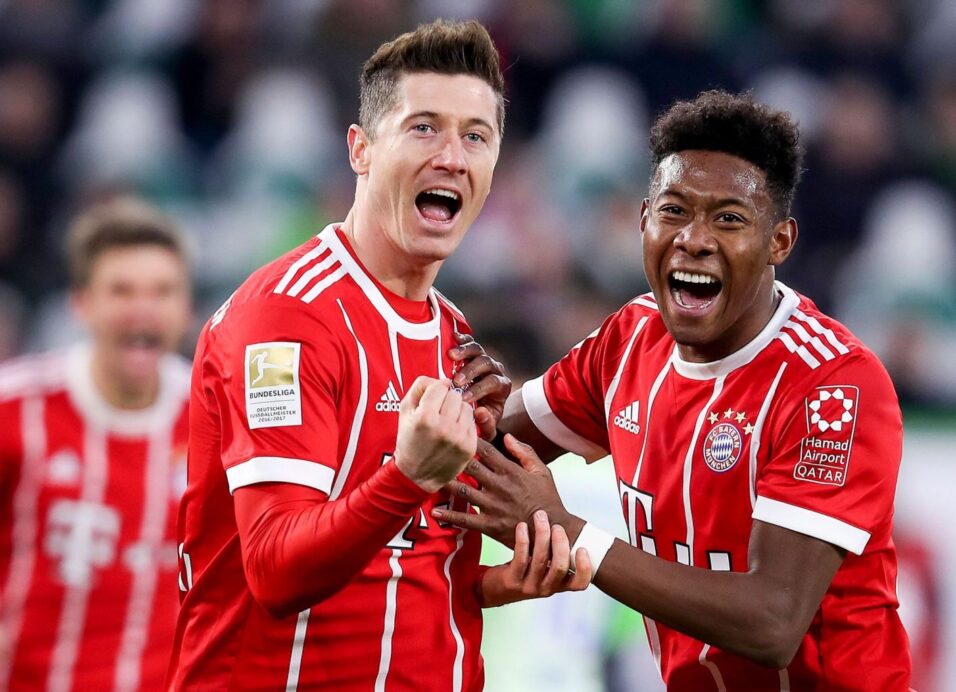 Even on their off days, good teams find a way to get the job done. Bayern Munich did just that on Saturday, edging Wolfsburg 2-1 in dramatic fashion at the Volkswagen Arena. Despite seeing a second-half penalty saved, and being behind for most of the match Bayern fought their way back for three points. Daniel Didavi’s header after eight minutes gave the hosts a 1-0 advantage which they held until after the hour mark. Arjen Robben’s 55th-minute penalty kick was saved by Koen Casteels before the visitors drew level. Sandro Wagner headed home Robben’s cross for his second goal with the club, before the striker made way for the eventual match winner. Robert Lewandowski who came on as a late sub, slotted the winning penalty in the 91st-minute past Casteels for a 2-1 Bayern victory. It was the Polish international’s 26th goal of the season in all competitions, which see Bayern move 21 points clear in the league table. Wolfaburg are in 13th after the tough defeat.

Elsewhere, PSG rolled to a home win against Strasbourg while Monaco defeated Dijon. Barcelona earned three points on the road at Eibar to extend their lead at the top of the La Liga summit. Manchester United and Southampton were victorious in FA Cup fifth round action.

Man United booked their place into the quarterfinals of the F.A. Cup after a 2-0 road win at Huddersfield Town. Romelu Lukaku sparked the Red Devils with a brace, scoring in each half for Jose Mourinho’s side. The Belgian’s first goal came two minutes in after he slotted past Jonas Lossi from the close-range. Lukaku shrugged off the challenge of Huddersfield’s Mathias Zanka and finished Juan Mata’s assist. After seeing two goals canceled out due to offsides, United slammed the door shut as Lukaku bagged his second goal of the evening. Sergio Romero made five saves in the clean sheet win.

In the only other tie with two EPL sides, Southampton advanced to the quarterfinals after a 2-1 win at West Bromwich Albion. Wesley Hoedt’s first goal of the season opened things for the Saints after 11 minutes. The Dutch defender finished nicely from a right-footed effort following a corner kick. Dusan Tadic added to the lead in the 56th-minute, scoring his fourth goal in all competitions. Salomon Rondon pulled the Baggies to within one two minutes later, but it would be a mere consolation. West Brom suffered their fourth straight loss in all competitions, while Southampton earned their third win out of their last five fixtures.

Here’s all of Friday and Saturday’s F.A. Cup results:

Barcelona got back to winning ways after last weekend’s scoreless draw by defeating Eibar 2-0 away from home. Luis Suarez and Jordi Alba both got on the board for Ernesto Valverde’s side in their final tune up before returning to Champions League action. Lionel Messi set up Suarez for Barca’s opener after 16 minutes, with the Uruguayan netting his 17th league goal of the season. Eibar’s comeback chances took a hit in the 67th-minute after Fabian Orellana saw a second yellow card. Alba added Barca’s second after 88 minutes, scoring from a rebound following Messi’s effort being saved. Eibar was held to three shots on goal, losing their first match since Jan. 13th. Barcelona are 10 points clear of Atletico Madrid, who are in action Sunday.

Schalke bounced back from last weekend’s road loss at Bayern by defeating Hoffenheim 2-1 at VELTINS-Arena on Saturday. Goals from Thilo Kehrer and Breel Embolo gave the hosts a 2-0 first-half lead which they would not let up. Kehrer’s header opened things in the 11th-minute, before Embolo slotted home a right-footed effort. Andrej Kramaric headed in his sixth goal of the season after 79 minutes but it proved to be too little too late for last season’s runners-up. Schalke are up to fifth place while Hoffenheim are down to ninth.

Roma made it three straight league wins after a 2-0 triumph on the road at Udinese. A pair of second-half goals earned the Romans three points in their race for a top three finish. Diego Perotti’s right-footed effort in stoppage time sealed the win for Roma after Cenzig Under’s long-range shot opened things after 70 minutes. Under has had a nice month of February for Roma, scoring his only four goals in his last three appearances. Brazilian international Alisson made three saves for Roma in the clean sheet, while offensively his teammates had seven shots on goal. Udinese are in 10th following the loss, while Roma are up to third.

Genoa’s impressive month of February continued on Saturday with a 2-0 home win against Inter Milan. The hosts had already taken the scalps of Lazio, and earned their second straight clean sheet in the process. An own goal by Andrea Ranocchia gave Genoa a one-goal lead heading into the halftime break. Goran Pandev’s left-footed effort found the bottom right corner to extend Genoa’s lead to 2-0. It was the Macedonian’s third goal of the season, and his second of the month. Mattia Perin kept Inter out five times in the match, helping his side move up to 12th place. Inter are down to fourth win the road loss.

PSG showed a quick memory from their midweek defeat at Real Madrid, by rolling past Strasbourg 5-2 at the Parc Des Princes. However, the visitors were the ones who took the early lead as Jean Aholou scored six minutes in. Julian Draxler drew PSG level in the 10th-minute ahead of a quick succession of goals. Neymar’s close-range finish put PSG ahead 2-1 after 21 minutes, before Angel Di Maria extended the lead a minute later. Stephane Bahoken’s long-range effort was the goal of the match, pulling the visitors to withone on after 67 minutes. Edinson Cavani slid home Javier Pastore’s through ball assist to make it 4-2 before the Uruguayan scored his 23rd league goal six minutes later. PSG remains 12 points clear at the top of the table, while Strasbourg are in 14th.

Monaco remained in second place following a 4-0 demolition of Dijon at the Stade Louis II on Friday evening. A trio of goals in the final 20+ minutes sealed the points for Monaco, who held a one-goal advantage Keita Balde’s 14th-minute opener. Fabinho’s penalty kick in the 69th-minute made it 2-0 for the Principality side. Rony Lopes added his fifth league goal of the season from a fast break, before Kamil Glik scored from a set-piece in stoppage time. Dijon had four shots on goal, but eventually dropped their third result in their last five fixtures.