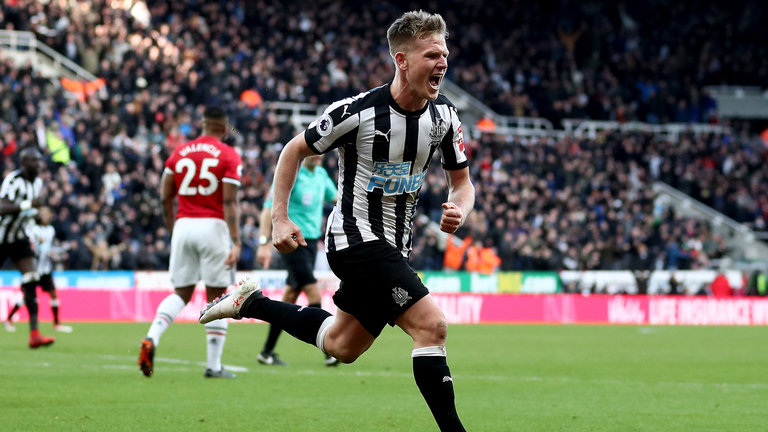 Newcastle earned their first three points over Manchester United since 2013, thanks to a 1-0 success at St. James Park on Sunday. The sides duked it out for 60+ minutes before the hosts found the breakthrough. Scottish international Matt Ritchie’s left-footed effort beat David De Gea to the bottom-right corner in the 65th-minute. It was the midfielder’s first goal of the season and was a nice finish after Dwight Gayle set him up. Martin Dubravka made six saves in the home clean sheet, which was the 29-year-old’s debut for the club. United remains 16 points back of rivals Manchester City for the top spot in the Premier League, and have several other clubs right behind them in the standings. Newcastle are up to 13th with the upset win, their first since New Years Day.

Elsewhere in Europe, Barcelona was held scoreless at home by visiting Getafe while Sevilla edged Girona. Werder Bremen rolled past Wolfsburg in Bundesliga play using a trio of goals. Lyon looked for three points at home against Rennes.

Liverpool used a pair of first-half goals on Sunday to down Southampton 2-0 at St. Mary’s Stadium. Roberto Firmino opened things after six minutes, finishing Mo Salah’s assist into the bottom-right corner. It was the Brazilian’s 20th goal of the season in all competitions. The duo then paired up on the Reds second goal of the match, with Firmino’s through ball assist being finished by Salah after 42 minutes. Lorus Karius made four saves in the clean sheet for Liverpool, which has them move back into third place. Southampton are in 18th after losing their first match since Jan. 2nd.

Chelsea hosts West Bromwich Albion on Monday in the final match of Round 27.

Barcelona was held scoreless for the first time in La Liga play this season, drawing 0-0 at home with Getafe. Philippe Coutinho was kept out on a pair of occasions by Vicente Guaita while Lionel Messi could also not break the deadlock. Luis Suarez who was quiet for most of the match, was also repelled by Guaita who deserved man of the match honors for his performance. Getafe was held to one shot on target but defended honorably in the draw. The visitors move up to 10th place, while Barcelona are seven points clear of Atletico Madrid.

Sevilla jumped up to sixth place after a 1-0 victory over Girona on Sunday. Pablo Sarabia scored his fourth league goal of the season to seal three points for the hosts. The Spanish midfielder was quickest to react, slamming home a loose ball in the box after Joaquin Correa’s effort was blocked. Aday Benitez missed a golden opportunity earlier in the match to put the hosts ahead, but was kept out by Sergio Rico from the penalty spot. Rico was the busier of the two keepers, making six saves in the clean sheet. Girona remains in ninth place after suffering their second loss of the new year.

Deportivo hosts Real Betis on Monday in the final match of Round 23.

Werder Bremen extended their unbeaten league run to three matches after a 3-1 victory against Wolfsburg. A pair of Austrian’s were the difference in the match as Florian Kainz netted a brace while Zlatko Junuzovic added two assists. Ludwig Augustinsson headed the hosts in front after four minutes from a corner kick. Kainz doubled the lead in the 40th-minute, rifling home from a long-range effort. Wolfsburg pulled one back after 49 minutes through the figure of Paul Verhaegh who finished on a rebound. Kainz’s second goal was beauty as the Austrian finished Max Kruse’s assist into the bottom-left corner. The hosts moved up to 15th with the win, sitting three points clear of the bottom three. Wolfsburg are down to 13th after the road loss.

AS Roma used a trio of second-half goals to pull away from Benevento for a 5-2 home win. Edin Dzeko put the hosts back in front in the 49th-minute after the sides shared the honors in the first-half. Cenzig Under extended the hosts lead to 3-1 in the 62nd-minute, after setting up Dzeko for his 10th league goal of the season. The Turkish midfielder doubled his tally on the afternoon, beating Christian Puggioni from long-range. The brace gave the 20-year-old his first two goals of the season. Enrico Brignola netted a consolation goal for Benevento minutes later ahead of Gregoire Defrel’s stoppage time penalty kick. Roma are up to fourth in the Serie A table, while the visitors remain 14 points from safety.

Lille pegged Nantes back twice at the La Beaujoire-Louis-Fonteneau on Sunday settling for a 2-2 draw. A left-footed finish by Nicolas Pepe gave the visitors the final say in the match, canceling out a two-goal performance by Emiliano Sala. Sala’s right-footed finish after 16 minutes had Nantes ahead going into halftime. Lebo Mothiba headed the visitors level in the 67th-minute for his first goal of the season. Sala answered back for Claudio Ranieri’s side as he headed home his 10th goal of the season after 71 minutes. Pepe’s sixth goal for his new club snatched a late point for Lille as they ran out with their seventh point of 2018. Nantes remain in good position, sitting in fifth place on 38 points. Lille are a point clear of the bottom three on 26 points.