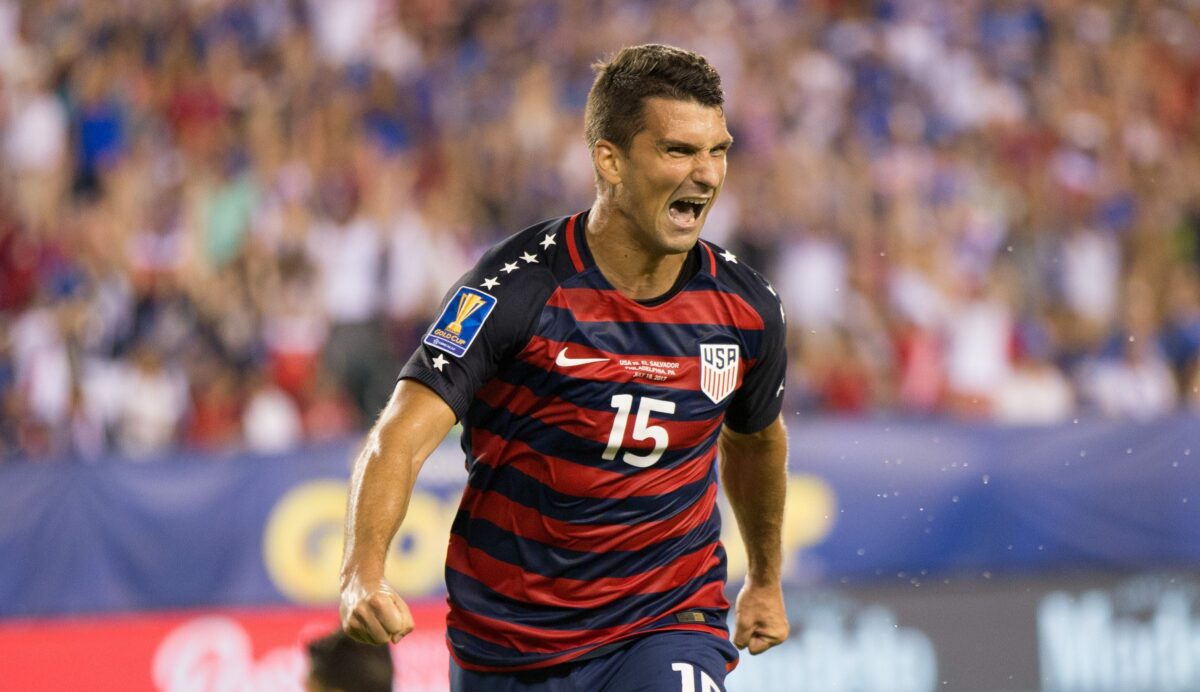 Every team needs a bit of leadership and every team needs one or two elder-statesmen to set a tone. With the U.S. Men’s National Team admittedly in a period of “transition”, Eric Lichaj is one of several players looking to step in and guide the next generation towards the next World Cup cycle.

At 29, Lichaj is the oldest player called into USMNT camp ahead of next Tuesday’s clash with Paraguay. The Nottingham Forest defender is one of just a handful of veterans leading the squad, one headlined by a total of 11 players under the age of 22.

Frequently on the periphery of the USMNT first team, Lichaj is embracing his new role with the current group.

“I take it as it comes,” Lichaj said. ” I always pride myself on working as hard as possible in every training session and I know what it means to put on the shirt for the USA. I’ve done it since I was 14 years old. It means a lot to me and hopefully I can transition that into training and, if the guys have any questions, I’m sure they’ll come and ask me.

“It’s just another opportunity for myself to show the coaching staff what I’m about, and there are a number of new faces I haven’t met before, so it’s about learning some new names and seeing how they play.”

While guiding the next generation is a motivator for Lichaj, it’s not his sole focus. He’s only 29 and in the prime of his career. There’s potentially a spot on the line for him as well and, after several up and down years with the national team, he’s looking to seize it.

Lichaj originally broke through with eight appearances in 2010 and 2011, but call-ups suddenly dried up shortly after. Lichaj made just three USMNT appearances from 2012 to 2017 before he rejoined the fold for this past summer’s Gold Cup.

That tournament saw Lichaj score a memorable quarterfinal goal against El Salvador, his first senior finish. He rejoined the team for World Cup qualifiers against Costa Rica and Honduras, although he did not play, before missing out on the now-infamous trip to Trinidad & Tobago.

When the team’s focus began to shift beginning this past fall, Lichaj was called in as one of several European-based veterans for the USMNT’s draw with Portugal. Now back in the fold, he sees this call-up as another chance to stake his own claim to a fullback spot.

“I guess it’s a transition stage, people would say,” Lichaj said. “You don’t know who will be playing in the future and stuff like that. You have to take every opportunity that you can. For me, I treat every opportunity like its my last. I want to make sure I show the coaching staff how I am as a player and how I am as a character because I think those aspects are very important.

“In the past, not being involved as much, it’s not disappointment. I’m a U.S. Soccer fan and I happen to play for them as well. It’s always nice to be here, and I don’t take any moment for granted.”

The current staff isn’t taking Lichaj for granted either. With such a young squad and an interim staff in place, veteran leadership is vital to helping integrate younger players. With several stars featuring in MLS and another in a state of limbo, its up to players like Lichaj, DeAndre Yedlin and Bobby Wood to set a tone while proving they still belong with the group as a new cycle begins.

“I’ve always been a big believer of a blend in your roster, of young and experience,” interim boss Dave Sarachan said. “Guys like Eric, others like Yedlin, they’ve been through qualifying and been part of the national team and they are massively important to guiding the young guys as to what they should expect and what the level should be. And he’s a good personality, and having good personalities in the group is huge.”

“I’m 29 and I’m one of the older guys,” Lichaj added. “Every day is an opportunity for us. It doesn’t matter how old or young you are. You have to show every day in training and in the game next Tuesday, what we’re all about. “