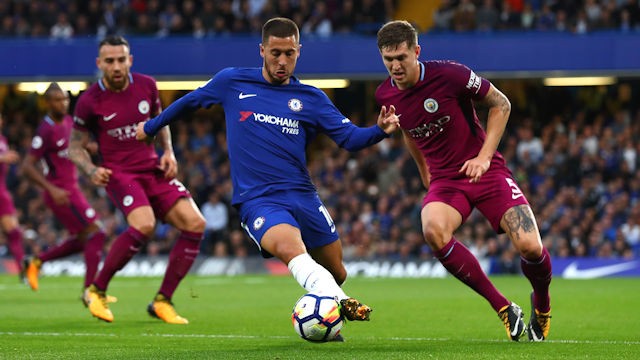 Manchester City have been one of Europe’s best teams this season, rolling to a 24-1-3 mark so far in the Premier League campaign. Pep Guardiola’s team will look to inch closer to the league title with a home date this weekend against defending champions, Chelsea.

City is coming off back-to-back 3-0 wins against Arsenal in both the Carabao Cup final and a make-up league fixture, and are clear 16 points in the league table. Sergio Aguero leads the Citizens with 21 league goals, while also contributing six assists as well. Chelsea have not been their usual selves this season, sitting in fifth place in the league table. Antonio Conte’s men have lost three of their last four league fixtures, including a 2-1 defeat at Old Trafford a week ago. Eden Hazard leads the team with 11 goals, and finished February with a three-goal tally in four matches.

Elsewhere this weekend, the Milan Derby takes centerstage in Serie A while Roma travels to Napoli. Liverpool plays host to Newcastle in the Premier League in Saturday’s late contest. The top two teams in La Liga square off as Barcelona hosts Atletico Madrid, while Real Madrid hosts Getafe a day prior. Borussia Dortmund looks to continue their impressive league play as they face off with RB Leipzig on Saturday.

Saturday’s final contest sees Liverpool face off with Newcastle United at Anfield. The hosts are unbeaten in their last five fixtures, conceding only three goals in that span. Mohamed Salah and Roberto Firmino have combined for 36 league goals this season, as well as 14 assists. Newcastle, led by former Reds manager Rafa Benitez have drawn three of their last four league matches. An impressive win over Manchester United on Feb. 11th was canceled out by last weekend’s 2-2 draw at Bournemouth. Dwight Gayle leads the team with five goals in league play. The sides played out a 1-1 draw at St. James Park earlier this season.

The top two sides in Spain’s top-flight will duke it out on Sunday as Barcelona welcomes Atletico Madrid to the Camp Nou. The hosts are five points clear in the league table, following their 1-1 draw at Las Palmas on Thursday. Lionel Messi has 30 goals this season in all competitions, with four goals and four assists in his last eight appearances. Atletico are winners of eight straight in all competitions, allowing only three goals in that span. Diego Simeone’s men will look to star striker Antoine Griezmann who netted eight league goals in the month of February. The sides played out a 1-1 draw back in Madrid on Oct. 14th.

Real Madrid will aim for their seventh league win of the new year as they face Getafe at the Santiago Bernabeu on Saturday. Los Blancos slipped up on Tuesday, falling 1-0 to Espanyol on the road. Cristiano Ronaldo leads the team with 25 goals in all competitions, with 14 coming in league action. Getafe are winners of two of their last three fixtures, posting 3-0 wins over than span against Celta Vigo and Deportivo. Spanish forward Angel Rodriguez has 11 league goals for the visitors this season.

Round 25 in the Bundesliga kicks off on Friday as Borussia Monchengladbach faces off with Werder Bremen at home. The hosts snapped a four-match losing run at Hannover last weekend, winning 1-0. Belgian international Thorgan Hazard has eight goals and five assists this season, but went without a point in February. Werder Bremen have won three of their last four league fixtures, moving up to 14th in the table. German striker Max Kruse leads the team with five goals, while American forward Aron Johannsson has had some impressive performances recently.

Saturday’s premier fixture sees two of the top six teams duke it out as RB Leipzig faces Borussia Dortmund at home. Leipzig have been shadows of themselves from a year ago, losing eight matches in the league already. German striker Timo Werner has 10 goals in league play this season, and 16 in all competitions. Dortmund have started 2018 off in better fashion than 2017, going unbeaten in their last nine matches. The return of German international Marco Reus has helped, while the acquisition of Michy Batshuayi has added a new striker up front. The duo has five goals combined since the start of the new year, and should help Dortmund going forward.

Sunday’s final match sees two local rivals battle it out at the San Siro as AC Milan hosts Inter. Seven points separate the sides in the table, but the hosts have had a better run of form in recent weeks. AC Milan booked their place into the Coppa Italia final after a 5-4 penalty shootout win against Lazio midweek. Overall, AC Milan are unbeaten in 13 straight across all competitions and will be favorites to win. After four consecutive draws to start 2018, Inter have won two of their last three league matches. Leading the way for Inter is Mauro Icardi who is the only scorer in double-digits for the team this season with 18 goals.

Two of the top five square off on Saturday as league leaders Napoli host fifth-place Roma at the San Paolo. Despite their exit from the Europa League, Napoli are unbeaten in 11 straight in Serie A action. Dries Mertens leads the team with 20 goals in all competitions, but only scored three in the month of February. Roma fell 2-0 vs. AC Milan last weekend, being shutout for the second time in the last six matches. Edin Dzeko is the lone Roma man in double-digits for goals this season with 11.

The top match in France’s top-flight this weekend comes from the Stade Louis II as Monaco faces Bordeaux. Leonardo Jardim’s men saw a three-match winning run snapped at Toulouse last weekend, following a 3-3 draw. Radamel Falcao has been a huge player for Monaco again this season, leading the team with 17 goals. Bordeaux have hit a rough patch, failing to win in their last two matches. After deciding to stay with the club for the remainder of the season, Brazilian international Malcolm leads the team with eight goals and six assists.