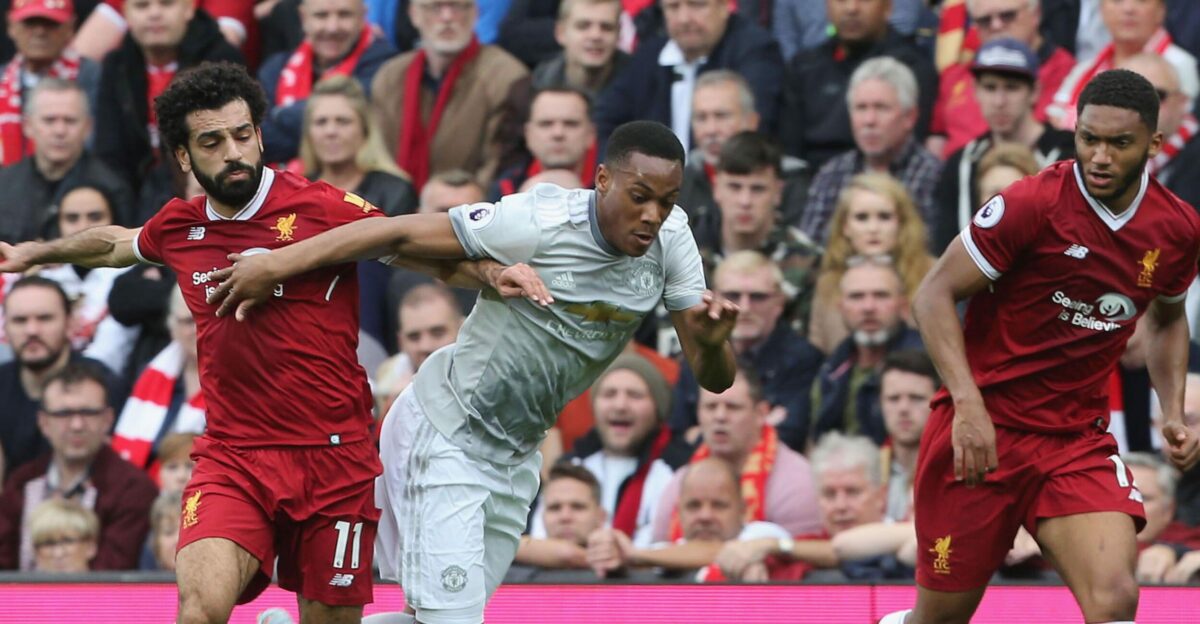 Two of the Premier League’s historic clubs will duke it out this weekend with both fighting for a runners-up finish in the league table.

Two points separate Manchester United and Liverpool ahead of Saturday’s clash at Old Trafford, with the Reds holding a slight edge in better form at the moment. Liverpool stamped their place into the UEFA Champions League quarterfinals for the first time since 2009 after a 5-0 aggregate win over Porto.Mo Salah has been a huge piece to Liverpool’s success, scoring 32 goals in all competitions this season. United fought their way back for a 3-2 at Crystal Palace on Monday, with Nemanja Matic scoring the winner from a scrumptious volley. Romelu Lukaku leads the team with 14 league goals, and 22 in all competitions. The sides played out a 0-0 draw at Anfield back in October of last year.

Elsewhere, Serie A leaders Napoli travel to Inter Milan this weekend in a top-five clash. Manchester City travel to Stoke City on Monday, while Borussia Dortmund face Eintracht Frankfurt in Bundesliga play. Lyon faces off with Caen in Ligue 1 play on Sunday. Both Barcelona and Real Madrid are on the road in La Liga’s 28th round.

Monday’s clash at the Bet365 Stadium will see two sides at different ends of the table, looking for three points. Stoke are in 19th and a point from safety, after three draws in a row. Paul Lambert has the side conceding less over the last few weeks, but knowing some wins are needed to avoid relegation. Swiss international Xherdan Shaqiri leads the team with seven goals and six assists this season. Manchester City are cruising their way to a league crown, sitting on 78 points. Despite a 2-1 second leg defeat against Basel midweek, the Citizens are off to the quarterfinal round of the UCL as well. Sergio Aguero has 30 goals in all competitions,including two in his last five appearances.

Following booking their place into the UCL quarterfinals, Real Madrid now turn their sights back to La Liga as they face Eibar away from home. Zinedine Zidane’s men are still a long shot to challenge for the league crown, but still could finish as league runners-up if they go on a good run. Cristiano Ronaldo scored again midweek, bringing his tally to 28 in all competitions. Eibar who dropped into eighth place last weekend are unbeaten in their last two league fixtures. Brazilian striker Charles is the main man for the hosts with six goals this season.

League leaders Barcelona will hope to extend their lead at the top of the table as they face Malaga away from home. The visitors are unbeaten in 12 straight since a Copa Del Rey defeat against Espanyol back in January. Lionel Messi has 31 goals in all competitions, and played the hero role in last weekend’s 1-0 win against Atletico. Malaga are bottom of the table, and sit eight points from safety. Six defeats in a row have the morale low at the club, but good news is they defeated Barca 2-0 in this fixture a year ago.

Friday’s opener comes from the Coface Arena as Mainz hosts Schalke. The hosts have drawn their last two, following a 2-0 win at Hertha Berlin on Feb. 16th. Despite their positive results, Mainz are in the relegation playoff place on 25 points. Mainz will look to leading scorer Yoshinori Muto to lead the way, who has nine goals in all comps. Schalke are jostling in the top-four race and have won three in a row. Impressive wins over Hoffenheim and Bayer Leverkusen have the team back on track after some slip-ups in February. Weston McKennie saw some gametime in his first match back for the club last weekend, and is available to start this Friday.

A pair of top-four sides will also square off this weekend as Borussia Dortmund welcomes Eintracht Frankfurt to Signal Iduna Park. Dortmund have hit a little rough patch in their schedule, going winless in four straight. A 2-1 first leg defeat to Salzburg in the Europa League Round of 16 on Thursday added to the recent struggles as well. Despite seeing a hit in playing time, Christian Pulisic bagged an assist in Thursday’s result. Frankfurt defeated Hannover 1-0 last weekend, getting them back to winning ways after a loss ended February. French striker Sebastian Haller leads the team with eight goals, while Timmy Chandler has four assists.

Here’s all of this weekend’s Bundesliga action:

The top match in Italy this weekend sees two old foes duke it out at the San Siro on Sunday. Fifth-place Inter Milan welcome league leaders Napoli to town, looking to have a say in the title race. It may be too far back for Inter to be involved, but they surely could add to Napoli’s recent up-and-down form. Mauro Icardi has 18 league goals this season, which is second in the league. After a 4-2 loss to Roma on home soil last weekend, Napoli have to get back to form and fast to avoid being knocked out of top spot. Juventus are on their heels sitting just a point behind them, and on good form themselves. Dries Mertens leads the team with 17 goals, and has scored in each of his last two league matches.

One of France’s in form sides will look for another three points as Lyon hosts Caen at home on Sunday. The hosts are unbeaten in six straight, including a 1-0 first leg win over CSKA Moscow in the Europa League. Lyon has a deadly duo offensively with Mariano and Nabil Fekir totaling 32 goals so far this season. Caen are in 12th place, and defeated Strasbourg 2-0 a week ago. Croatian striker Ivan Santini leads the team with eight goals, but has not scored in his last two appearances.