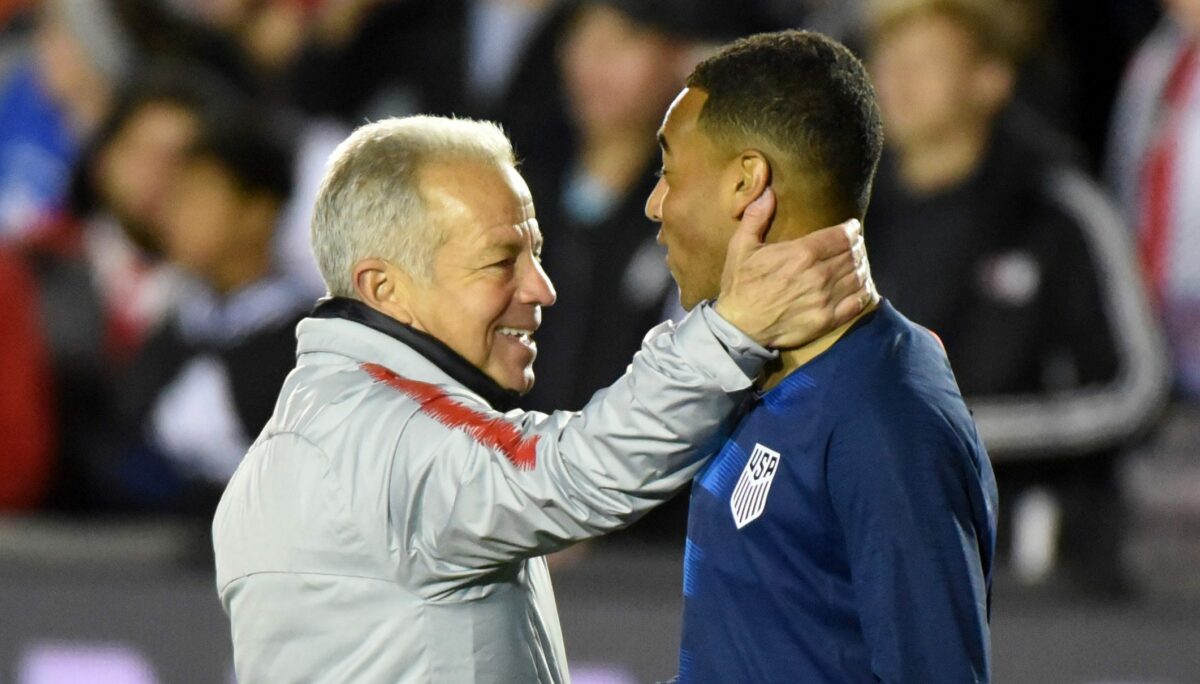 The U.S. Men’s National Team got the job done on Tuesday night. A young group put in a strong performance against Paraguay and, when the whistle blew, the U.S. had captured a much-needed win.

Still, for a friendly, there was a noticeable lack of creativity, in more ways than one.

Given the roster at hand, the USMNT emerged in a 4-1-4-1 formation featuring three central midfielders. That trio of Wil Trapp, Marky Delgado and Tyler Adams bossed the middle of the field, but it was what happened, or what didn’t happen, in front of them that was one of the big takeaways from the performance.

Lacking a true No. 10 or playmaker, the U.S. struggled to create in important parts of the field with many of their opportunities coming from fullback overlaps and one-on-one wing play. There were attempts at fluidity but, by and large, there as a lack of a creative spark in a match that saw the U.S. fire just six shots with three on target.

“I think the system, on paper, is a 4-1-4-1, but the information throughout the week is that we want movement and interchange,” said interim boss Dave Sarachan. “We don’t want to leave our strikers stranded and we have some decent passers in the middle with Wil and Marky. Tyler is so effective in terms of breaking out as he showed on the penalty and also defensively when we want to press.

“That system allows us to really get after teams and make it difficult on them. Systems are overrated, it changes all the time, but I think that’s the approach we took and I thought it was okay.”

On the day, Kenny Saief was likely the USMNT’s primary danger, at least through the first half. The winger played well on the left side alongside Jorge Villafana, even if the final ball was a bit lacking. In front of him, Bobby Wood struggled to hold the ball or link to the other attackers, taking away another element of creativity.

Now, it was very apparent that there was one giant Christian Pulisic sized hole in the USMNT attack, and that problem will be fixed in time. Still, aside from Pulisic, the U.S. will need to find another player to provide a bit of creativity in the attack over the next year or so.

Perhaps some of those players started the match on the bench. Timothy Weah showed a bit of flair and confidence that has been missing from the USMNT. Andrija Novakovich’s long strides looked pretty good on his breakaway late in the second half. Rubio Rubin has proven a solid attacking presence with both the U.S. and Club Tijuana.

But, by and large, the substitutes were a bit quiet as Sarachan once again chose a safe route over a more exciting one. We didn’t get a look at Antonee Robinson or Erik Palmer-Brown or Shaq Moore, first time callups that didn’t get a chance to make a first impression. It felt like an opportunity wasted. We know Villafana, Wood, DeAndre Yedlin and Darlington Nagbe. Would it have hurt to have inserted someone a bit fresher?

Sarachan said that was due to the “ebbs and flows” of the game, one that certainly changed as it went on.

“All the guys that came in had a great experience of being a part of the national team throughout the nine days,” Sarachan said. “You don’t just make changes for changes sake. We did want to make at least three or four subs, and it could have been six, but that game sort of evolved in a way where we felt the players on the field needed to be rewarded for a great effort. ”

Still, it certainly wasn’t a missed opportunity. After a dull draw in January, a win was certainly a positive for the U.S., a team that hadn’t tasted victory since Panama last fall. Winning builds confidence, and from confidence comes the creativity.

In the months to come, the U.S. will get more chances to impress and build on a solid but understated effort against Paraguay.

“You always want more. That’s a work in progress in terms of developing a chemistry and combination play in the final third,” Sarchan said. “Paraguay defends well. They really do. They have blocks of four, they look to step up quickly. They traditionally don’t allow a lot of chances. I didn’t expect a lot of chances.