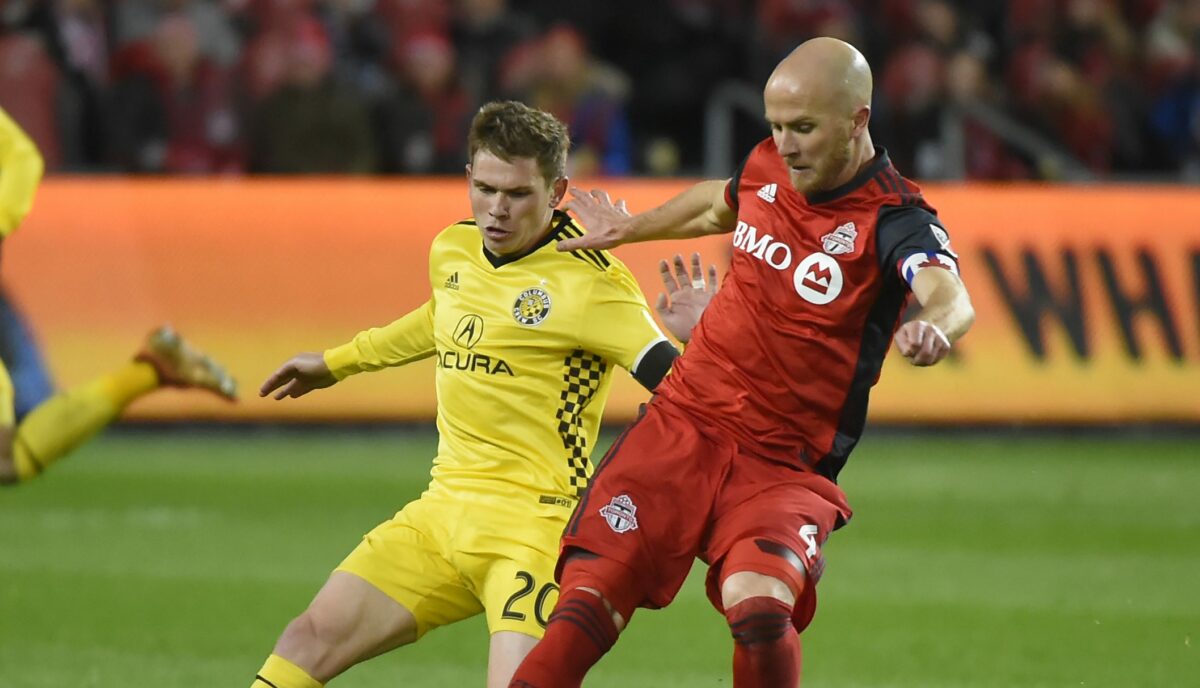 Our wonderfully chaotic and unique domestic league is back.

Major League Soccer kicks off its 2018 campaign Saturday afternoon, when defending champion Toronto FC takes to the field to face the Columbus Crew.

The Saturday slate spans almost 12 hours, with a late-night West coast kickoff to finish off the night.

Sunday’s four-game slate is chock full of juicy matchups between potential playoff teams, and it features the debut of the latest expansion club.

Toronto FC receives a proper celebration of its 2017 honors with a home game to start the season at BMO Field. The Reds are coming off an easy triumph over the Colorado Rapids in the CONCACAF Champions League, and they’re favored to knock off the Crew.

Gregg Berhalter’s side has a few new pieces in attack, with forward Gyasi Zardes replacing Ola Kamara as the top scorer. The U.S. Men’s National Team player faces a difficult task going up against Toronto’s sturdy back line.

Toronto won two of the three Trillium Cup matches in the 2017 regular season, while it used a 1-0 home win in the Eastern Conference final to advance to MLS Cup.

Atlanta United enters 2018 with the most exciting attack on paper, but they could take a backseat to the front three of the Houston Dynamo in Week 1.

With Ezequiel Barco sidelined with an injury, Miguel Almrion, Josef Martinez and Darlington Nagbe will headline the lineup up top for the Five Stripes.

The Dynamo possess one of the most underrated attacking trios in MLS in Alberth Elis, Romell Quioto and Mauro Manotas, and don’t be surprised if they match Atlanta’s production at BBVA Compass Stadium Saturday.

The New England Revolution still have the pieces in attack to wreak havoc on an opposing defense, but how they work in Friedel’s system remains to be seen.

The Union’s youth movement will be on display throughout the 2018 season, with Auston Trusty and Anthony Fontana expected to start Saturday at home. A fast start is imperative for the Union with four of their first five games coming at Talen Energy Stadium.

D.C. United’s quest for their second-ever win in Orlando comes at the start what’s supposed to be a refreshing season. The Black and Red have to start with a majority of road games, but they’re energized by a roster with plenty of talent, led by USMNT midfielder Paul Arriola.

The new-look Orlando City gets its first chance to impress Saturday, with Sacha Kljestan and Justin Meram joining Dom Dwyer in the final third.

Orlando has won the last three meetings with D.C. and four of the last five clashes between the teams, including a pair of wins in 2017.

FC Dallas beat Real Salt Lake by a combined score of 9-2 in two games a year ago, with a 6-2 thumping on June 3 coming at Toyota Stadium.

Oscar Pareja’s side would love an offensive outburst against the Claret and Cobalt to cure its CCL blues.

Mike Petke’s RSL comes into Frisco looking to take advantage of FC Dallas’ poor performance against FC Tauro, and there’s reason to believe Albert Rusnak and Joao Plata will run rampant against the FC Dallas defense that is still putting things together.

Saturday’s night cap is a test of your MLS diehard fanhood in Week 1.

The late West coast kickoffs are only for the strong of heart, but this week’s late-night showdown should provide plenty of intrigue, as the San Jose Earthquakes try to get off to a fast start under new manager Mikael Stahre.

Don’t count out Minnesota United in this match with Abu Danladi leading the attack. The biggest concern for the Loons, like it was all of last year, is defending. If they can put in a solid defensive performance, it will go a long way in shaping the season.

The first game on Sunday’s schedule is an interesting one given the paths Seattle and LAFC are on.

Seattle is fresh off a CCL victory over Santa Tecla on Thursday, and it’s working on adjusting to life without Jordan Morris. Don’t be surprised if the Sounders use a bit of an experimental lineup with the quick turnaround.

LAFC has an opportunity to leave CenturyLink Field with a point if its attack fires on all cylinders against Seattle’s tired legs. But there’s also a chance the expansion side struggles to discover chemistry at game speed and falls to the defending Western Conference champion.

The Impact should field a competitive side in Remi Garde’s managerial debut in a series in which the away team has won three of the last five clashes.

Still, the whitecaps appears to be the favorite to win this contest given its firepower in attack led by Kei Kamara, but the defense could be a question mark depending on the status of centerback Tim Parker, who has been mentioned in trade rumors in the last week.

NYCFC brought in a collection of veterans to complement players like David Villa, Alex Ring and Sean Johnson. The depth of Patrick Vieira’s squad should be one of its best qualities in 2018.

Sporting KC is looking to fill the void left by Dwyer when he was traded to Orlando last summer. Felipe Gutierrez, Yohan Croizet and Johnny Russell should be active in the final third, while Khiry Shelton, who was acquired from NYCFC for Saad Abdul-Salaam, is expected to start up top.

The Portland Timbers come into 2018 as one of the favorites to win the West under new manager Giovanni Savarese, who made a good amount of roster improvements in his first offseason.

Rarely do we say this about the LA Galaxy, but they’re trying to prove to us that they’re worthy of being in the national conversation again after struggling in 2017.

Don’t be surprised if this turns into a shootout with Diego Valeri and Ola Kamara leading the charge for their respective sides.