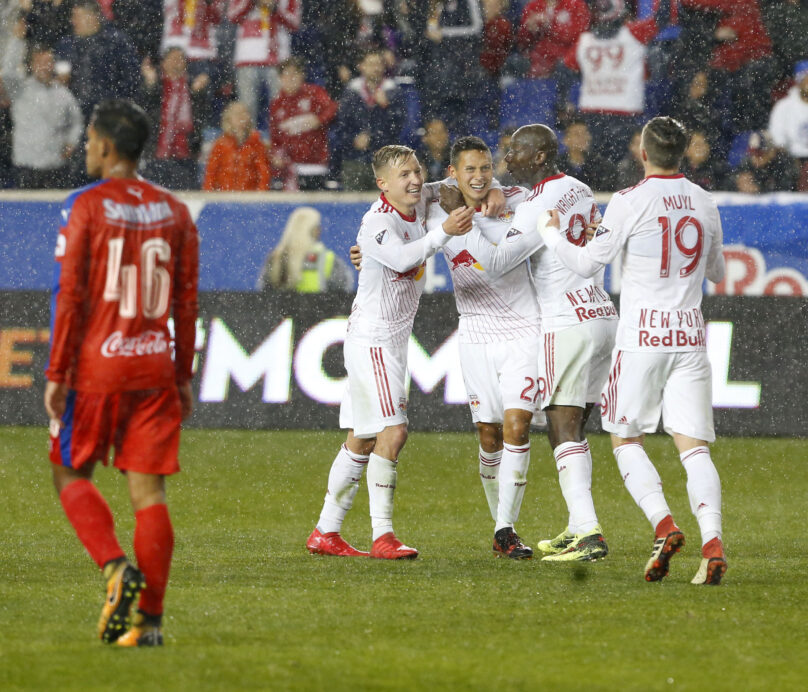 The New York Red Bulls recorded a relatively rare win for MLS teams in the CONCACAF Champions League, as they managed to advance to the quarterfinals of the tournament. Beating Honduran side C.D. Olimpia over two legs was not an easy task, but the team’s tactical flexibility played a big part in their victory.

“I think both games we tried to be more compact and invite them to come a little bit more,” he said following the team’s 2-0 victory at Red Bull Arena which featured a four-at-the-back system to start

He admitted that it might have worked better in the second leg than in the first, saying during the first leg, the team was a bit more tired and stretched than they wanted due to elevation.

The Red Bulls started the same way at home, and remained that way until Bradley Wright-Phillips’ goal opened up the scoring in the 54th minute. Then, the Red Bulls switch to the formation Marsch called the 3-3-3-1. That meant that Michael Amir Murillo shifted from right back to join Aaron Long and Aurelien Collin at center back, and Tyler Adams moved from midfield to the right side of defense.

Adams stressed the importance of players “knowing their roles,” which aided him as he moved around the field during the second half of the match.

“Obviously, their wingers are good players,” Adams said, which led to his shift to the backline. “Whenever I got isolated to shut Chirinos down was important (to control the game).”

The formation change was beneficial, as Sean Davis’ goal came in the 64th minute, soon after the switch.

Marsch switched up tactics one final time before the end of the match, setting the team up in a 5-4-1. In that formation, they closed out the match strongly, and preserved their clean sheet.

“Tactically, we shifted to five in the back, which was massive for us,” goalkeeper Luis Robles said. “They has some good, speedy wingers, so for us to have guys out there at all times helped mitigate that threat.”

“I think tactically we were good in this series,” he said. “We created a lot of advantages and now we have to capitalize onthem.”

That, for Marsch and company is the first aspect of their game that they have to improve on ahead of next week’s first leg against Club Tijuana. Additionally, Marsch identified other areas of improvement.

Regardless, the ability to change tactics with relative ease is a positive for the Red Bulls.

“we know that this group is more comfortable now with playing different formations,” Marsch said, “and that’s a good sophistication to have within the group that we can manage moments within individual matches.”